Descendants of Mary Biddle rediscover the HBCU their matriarch helped to establish a century and a half ago. 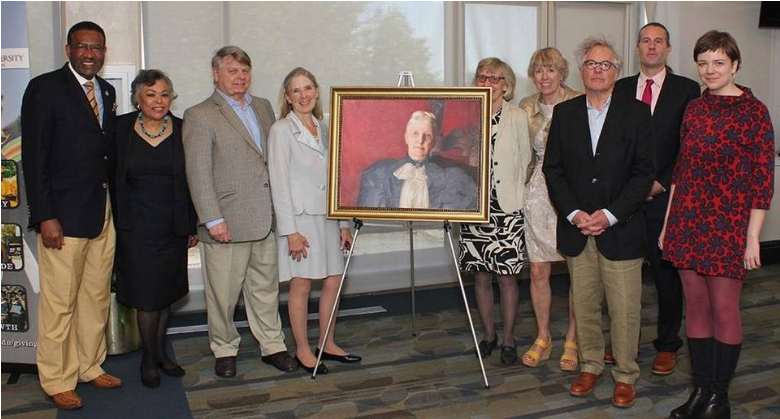 Since shortly after the Civil War, the name Biddle at Johnson C. Smith University meant the red brick administration building and a long-dead war widow whose gift had helped start the Charlotte school.

Then, a couple of years ago, flesh-and-blood Biddle kin began showing up.

By the time Smith celebrated its 150th anniversary this month, seven cousins descended from donor Mary Deborah Baird Biddle had their own table at a Saturday night gala. They brought more gifts, including a document signed by Abraham Lincoln and the beginnings of a Biddle scholarship fund.

The events brought the university, the center of Charlotte’s oldest black neighborhood, called Biddleville, full circle back to its roots. And a scattered family began to rediscover its past.

“It brought us together as a family and brought the relics out of the attics, and the school really welcomed them,” said Deborah Ruth Marshall, a great-great-granddaughter of Mary Biddle. “All seven of us were deeply moved.”

The Biddle-Smith story begins in wartime Virginia, at the bloody Battle of New Market Crossroads in 1862.

Maj. Henry Biddle, a Union officer from Philadelphia, is shot and wounded. Family lore says Confederate Gen. Thomas “Stonewall” Jackson, who knew Biddle from West Point, has him carried to a Southern hospital in Richmond where Biddle dies.

After the war, ministers S.C. Alexander and W.L. Miller feel called to establish a college for black students in Charlotte. The Catawba Presbytery grants a charter for the Freedmen’s College in 1867.

In Pennsylvania, Mary Biddle reads a church appeal for funding and pledges $1,400 in honor of her late husband. When she gives another $500, the college is renamed Biddle Memorial Institute and later Biddle University. Biddle Memorial Hall went up in 1883. At her death in 1900, Deborah Marshall said, Mary Biddle’s will bequeaths another $5,000 to the school.

The university took its current name in 1921, when Jane Berry Smith of Pittsburgh donated money for buildings and an endowment in memory of her late husband, Johnson C. Smith. Now a private liberal arts university of 1,400 students, it has never been able to make contact with Smith’s descendants, President Ronald Carter said.

But the reconnection with Biddle’s descendants “was extremely important as we celebrate the undeniable progress of the university,” Carter said. “We cannot do that unless we pay tribute to the historic founders and what was a transformative gift. Back then, $1,400 was a lot of money.”

The first contact came as Carter was coming out of Biddle Hall one day. He saw an unfamiliar face in the parking lot and walked over to offer help.

The visitor introduced himself as Spencer Dick, a Biddle descendant who had stopped by during a business trip.

“He knew our great-great-grandmother had started a Biddle university somewhere in the South, but no one had ever visited the school,” Marshall said.

Carter gave Dick a full tour of Biddle Hall and the campus. Dick, moved by what he saw, emailed his cousins when he got home. Marshall first visited in early 2016 and returned for this year’s CIAA basketball tournament.

“That’s when we started brainstorming about opportunities to reconnect,” Carter said. “She saw the 150th anniversary as a centering moment for the family.”

Marshall, a salmon fisherman and guide in southeastern Alaska, can explain the family’s long absence. Mary Biddle had only one grandson, who was raised in Washington and Oregon and had four daughters – all of whom took new last names when they married. Meanwhile, the university changed its name from Biddle to Smith.

Although the family had pieces of Mary Biddle’s story, the Biddle surname and university connection was largely forgotten by its western clan.

Most of her relatives still live in western states, but Marshall is reaching second and third cousins with the goal of raising a $1 million scholarship endowment in Mary Biddle’s honor.

At a Founders’ Day luncheon on April 9, the family unveiled a portrait of Mary Biddle, a gift that will hang in Biddle Memorial Hall. They also presented a copy of Henry Biddle’s Army commission, signed by Lincoln.

“It’s taken 150 years for the Biddles to find Johnson C. Smith University,” Marshall said, “and now you’re not going to be able to get rid of us.”