What started as an effort to help family members get healthy developed into a lifelong cooking habit for two church members. 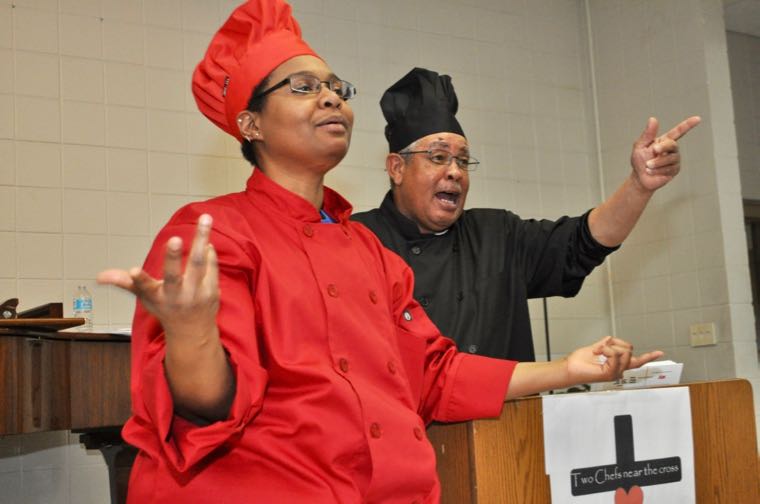 Positive change can sometimes flow from difficult spaces in our lives.

Take the story of Marvin Byrd and Kat Harris, both members of St. Luke Missionary Baptist Church in Charlotte. While learning to care for family members diagnosed with diabetes, each discovered a passion for healthy cooking – and they are now teamed up to spread that passion throughout the Mecklenburg County Health Department’s Village HeartBEAT program.

Harris, whose day job is in corporate procurement, said she started cooking healthy after diabetes and high blood pressure impaired her maternal grandmother. For Byrd, now retired, the lifestyle shift came shortly after his wife was diagnosed.

“She wanted to get off insulin, so we started looking at alternative cooking,” he told Qcitymetro during a recent interview.

Their commitment to healthy cooking was on display last month when Village HeartBEAT hosted a cooking workshop for participants in the faith-based program. The menu included meats cooked with no salt and desserts baked with no sugar.

Of special note was a butternut squash and carrot soufflé, spiced with a touch of orange juice, Agave nectar and lemon juice. Some said it tasted like sweet potato pie.

And that’s the point of healthy cooking, Harris and Byrd said – you need not sacrifice taste to prepare healthy meals.

How it all got started

Neither Byrd not Harris is trained in the culinary arts.

“We’re strong in the community and love the Lord, but we also love cooking for people,” said Harris.

The two became friends while volunteering at their church, especially in the food pantry. They also bonded during a 32-week discipleship class they shared — Harris frequently cooked dinner for the group, while Byrd made tasty desserts.

After St. Luke Baptist became part of the Village HeartBEAT program, the two agreed to become its ambassadors for healthy cooking, and they are now brainstorming ideas for a Village HartBEAT cookbook — all with healthy recipes, of course.

Despite their shared interest, they have their differences: When baking cakes, for example, Harris does not use eggs; Byrd does.

And while Harris said she eats out “very, very rarely,” Byrd said he doesn’t mind letting a stranger cook on occasion, though he tries to find restaurants that offer healthy menu options. A need to change habits

With a wife diagnosed with diabetes, Byrd said his entire cooking style changed. And eventually, so did his eating habits.

For example, Byrd said, his wife must avoid all wheat products.

“My cooking skills were progressing the whole time, because her diet was changing,” he said. “I was used to soul food cooking. I changed all that and went vegan — tofu and everything.

“I used to get up in the morning and fix a pot of grits,” he added. “I don’t even do that anymore. …Now it’s more uncured bacon, a couple of eggs, yogurt fruit.”

For Harris, who grew up in New Orleans, the shift was equally stark, if not more so.

“New Orleans is all about cooking, but it’s not necessarily healthy cooking,” she said. “So I would take New Orleans dishes, modify it, and it would be healthy. Then once I moved to Charlotte, I learned North Carolina and South Carolina, because it’s different cooking.”

At the Village HeartBEAT workshop, the two shared some of their best healthy-cooking tips, conceding that healthy cooking does sometimes mean spending slightly more for better products and ingredients.

But think of it as a trade-off, Harris said.

“It cost of little more on the front end, but that same cost will delay the cost of medical procedures and going to the doctor and all these medications that you have to have,” she said.

As for the family members who inspired their healthy-cooking journey: Harris’ grandmother eventually passed, an event with which Harris still struggles. Meanwhile, Byrd said, his wife is no longer taking insulin. Read labels before you buy, he said.

Avoid canned vegetable in favor of the frozen kind; Frozen vegetables have less salt and other additives. And whenever possible, go to a local farmers markets and buy vegetables fresh.

“It’s a lot more trouble being sick than it is to read that label,” he said. “You can believe that. It might take you weeks to get straightened out, just because you didn’t read the label.”

Whatever you cook, “put love in it,” she said. “You’ll taste the difference in your food. If you’re aggravated, frustrated and you go and cook, it’s nasty. If you’re thinking about somebody you love and you’ve got a good song going, like “Family Reunion” by the O’Jays, some good gospel jazz, the good feelings come through in your food.”

Harris also advises folks cooking at home to eliminate salt, or at least cut back. (Add salt after your meals are cooked, she said, not during the cooking process.) You can often get the same taste, she said, by substituting salt with a mix of other seasonings.

Finally, she said, eliminate margarine and use butter. Or better yet, whenever possible, try extra virgin olive oil.