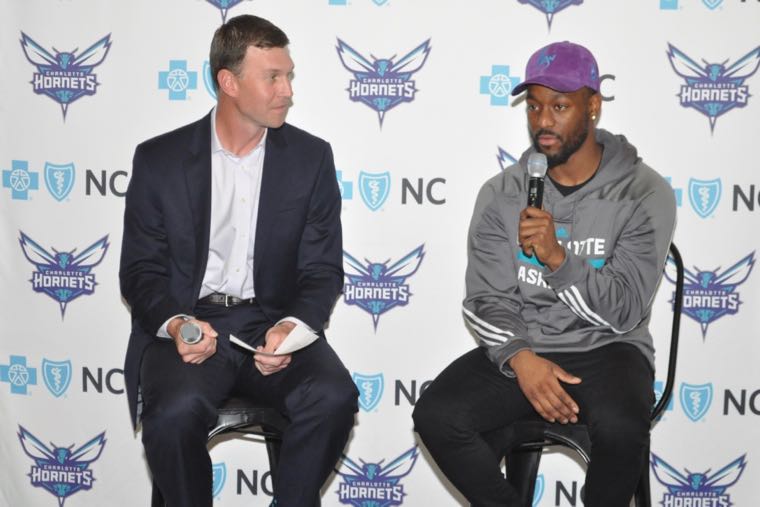 The Charlotte Hornets, at 36-44 and out of the playoff race, are on the cusp of ending a disappointing season, but for Kemba Walker, the team’s all-star point guard, times have never been better.

In addition to being named an NBA all-star for the first time in his five-year career, Walker also emerged this season as one of the league’s top 3-point shooters. He needs just four more (with two games left) to break Charlotte’s single-season record of 243.

The 26-year-old New York native recently took questions from a small group of fans at 7th Street Public Market, an event hosted by Blue Cross and Blue Shield of North Carolina. Some of his comments are printed below, edited for brevity and clarity.

Being inside the all-star locker room

It was definitely a very surreal moment. You’re among the best players in the NBA, especially the older guys like LeBron (James) and Kevin Durant, Melo (Carmelo Anthony). I don’t know if anyone knows it, but Melo, he’s my favorite player since I’ve been in junior high school. For me to be around him for those couple days, that was like the best thing ever. …I got a chance to really speak to him a lot. Russell Westbrook, Stephen Curry — everybody was just there. I would have never thought in a million years that I would be an all-star in this league.

His five years in Charlotte

It’s been great. I’ve had a chance to see how things get better each and every year. My rookie year, we won seven games — it was bad — and the next year after that wasn’t so great, either. From that point on, we just continued to get better. Just being able to get out into the community and see the same faces all the time for years, you know, it’s really cool. I love being involved with the fans, of course. I love the community. A lot of these people, they’ve seen me grow, so it’s been special to me.

That’s kind of what I’m known for. That was actually one of my motivations coming into the NBA. Everybody was just, “Hey, Kemba, I remember that step-back against Pittsburgh in the Big East Tournament.” …That’s great, but that was college. I wanted to make a name for myself in the NBA as well.

His development as a 3-point shooter

…I shot about 30 percent from the 3-point line my whole basketball career. But when I got here, that’s all they kept brining up to me, after every year — they kept telling me, “You’ve got to get your 3-point percentage up; you’ve got to get it up.” We got a shooting coach last year. I worked with him last summer, and man, it was tough. This guy came in and he had me shoot in front of him. He recorded me, and then we watched it. He said, “You need to bring the ball up to the right. You need to get up on your toes more.” …We did that for the whole summer. It was so hard. I didn’t even want to do it. I’d been shooting this way for 24 years, and this guy just comes in and tells me to switch it up. I put in so much work, and I stuck with it.

His development as a team leader and being named co-captain

I’ve always considered myself a leader, but it’s always been by example, for the most part. I’m not a big talkative guy, so I really had to work on my vocal leadership. I just try my best to talk to my teammates as much as I can. If guys are struggling, I want to be the one to, you know, give them all a lift. …I try my best to keep my teammates positive. Those guys are great. …They are the ones that make things easy for me, because they allow me to be who I am. They allow me to lead them. I’m 26-years-old, and a lot of those guys are much older than me, have been playing basketball in the NBA a lot longer than me as well, so they don’t have to listen to me. I’m just a small, 5′-11” guy.

Favorite team to play against

I’d have to say the Knicks, especially at The Garden. I’m from New York, so it’s always fun to play against the home team. Playing at MSG (Madison Square Garden), it’s just really special. I’ve had some special moments in my career in that place, so it’s always cool to go back home and play in front of my friends and some family members.

You’re putting me in a tough position right there. Nobody record this, please. Honestly, I think Marvin Williams. He’s by far one of the best teammates I’ve ever been around. He’s so competitive. He’s a leader. He leads by example. He plays extremely hard each and every night. He’s one of the older guys on that team, and the way he works each and every day — it’s like second to none. Marv would have a bad game — didn’t shoot the ball well on a particular night — and after the game, he and his dad would go upstairs to the (practice) gym and he’ll shoot 500 jumpers until he makes 500 shots. He’s pretty unbelievable.

Before I played basketball, I was a dancer. I danced at The Apollo (Theater in Harlem). I was maybe 8 or nine then. Yeah, that’s what I did before I actually got serious into basketball. …My (current) dance moves, they’re shaky. I’ve got to get back in front of the mirror and practice.

Free agents who might improve the team and him

I think one of the bigger free agents this year is probably Blake Griffin. I think Blake would be a great fit for us. I mean, don’t get y’all’s hopes up. (laughter) It sounds good.

We actually talk about that in the locker room, how people just…they just see us play on TV. They don’t really know the work that we put into our games. Hard work definitely beats talent every single day. …I’ve always had to work a lot harder than the average player, because I’m small. …I had to learn how to create space on my jump shots. I had to learn how to make jump shots consistently. Growing up, I wasn’t always the best player on the team. I had to work toward that. It’s all about mindset and how good you really want to be at whatever you do — whether it’s basketball or you want to be a doctor or scientist, or whatever. It’s about how much work ethic you have to be the best.

Advice from the legends

MJ (Michael Jordan), the one thing he always told me was to just be myself. My rookie year, I was 21 years old, and I was around these guys and I didn’t want to step on anybody’s toes and try to do too much. So I was kind of passive. MJ, he pulled me aside one day and he just said…he told me just to be myself. He said, “We drafted you for a reason.” So I thought that was great advice — to never be passive and always be aggressive and always be who I am. And Patrick Ewing…he’s been a great role model for me. There have been times when I’ve been struggling throughout a game, early in the game, struggling, not making any shots. He’s always the guy who comes up to me and says, “It’s a long game.” He always tells me not to get so down on myself, don’t get so mad that the shots don’t come, that at some point I’m going to make some shots.

Ballin’ in the Bronx

I was actually one of those kids that just played. We had a bunch of different courts around in my neighborhood. It’s one behind my building; it’s one down the hill from my building, and it’s another one in back of the projects. We always just went around and just played. It’s just kind of what we did. I can’t say that anyone really pushed me to play. I think I just played because it was around me all the time. …It kept me out of trouble. As I got older, I realized that I could get a scholarship from it to go to college for free and my parents didn’t have to pay. It’s helped me to become a great person. It’s helped me to become a role model for kids, which I never though would happen for me.

First thoughts of playing in the NBA

Probably my senior year in high school, when I was named to the McDonald’s All-American Team. I don’t know how, but I came across this stat that said kids in the McDonald’s game had the highest change of reaching the NBA. Then I saw these mock drafts with my name on it, and I was like, “Wow!” So I really pushed myself to become the best player I could be, and it worked out for me.

I try my best to think about it all the time, but it’s just so hard for me because I just don’t know yet. I know I don’t want to be a coach. I don’t have the patience for that. I’ve been thinking maybe player development — just something to help the young guys out, help those guys become better players.

I don’t know who would be available. Let me think of someone who might be there (when the Hornets get to select). There’s a few guys. That kid in Kentucky — Bam (Edrice Adebayo). I like him. I like the way he plays; he’s big. I think Zach Collins from Gonzaga. He’s pretty good.