‘Bud, Not Buddy’: It speaks my language

From dialog to character development, this Children's Theatre of Charlotte production spoke a language familiar to me as a black American. 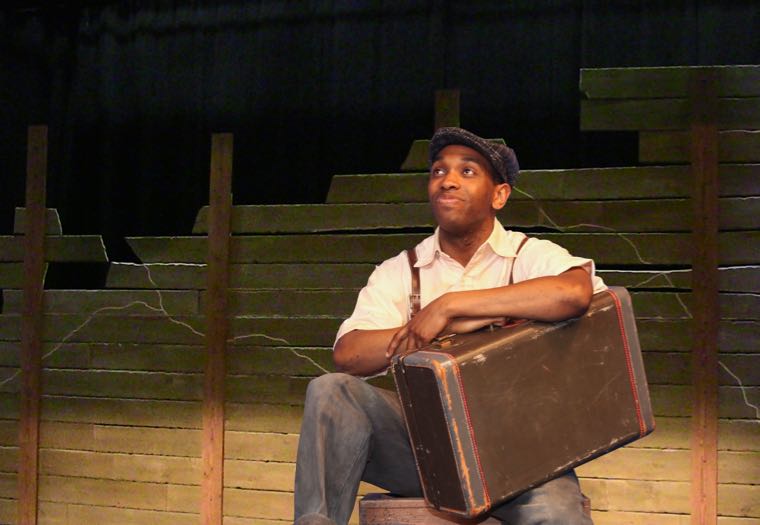 Devin Clark plays the role of Bud in the Children's Theatre of Charlotte production of "Bud, Not Buddy." Photo: Donna Bise

As consumers of live theater, I instinctively know when a production is more about me than for me. So imagine my joy when I saw the Children’s Theatre of Charlotte production of “Bud, Not Buddy,” an uplifting play that falls squarely into the latter camp.

From dialog to character development, this was a production that spoke a language familiar to me as a black American.

Based on the award-winning book by Christopher Paul Curtis, Bud tell the story of a 10-year-old orphan who sets out from Flint, Mich., during the Great Depression to find the man he thinks is his father, a man he’s never seen or spoken with. His only clue: a name — Herman E. Calloway — printed on a jazz poster his mother kept before she died.

So off Bud goes on an improbable journey to find his musician-dad. Along the way he learns the true meaning of family.

For some, it might be easy to assume that this play is a subtle reference to all those absentee fathers in black homes (and perhaps it is), but that narrow view would miss a much more universal narrative. Although Bud and nearly every main character in the play is African American, their story is one of love, acceptance and the indomitable will to never give up.

Director Jerrell L. Henderson, writing in the CTC show guide, recalls fighting back tears the first time he read the book, which won the Newberry Medal for children’s fiction and the Coretta Scott King Award, which is given annually to African American authors and illustrators of children’s books that demonstrate an appreciation of African American culture and universal human values.

“…as I sat openly crying over a book in a coffee shop in Lancaster, Pennsylvania,” Henderson wrote, “it dawned on me that I had been rooting for Bud since page one.”

Indeed, who in his right mind could not root for Bud, a precocious nerd who is never hardened by the many obstacles he encounters? (“My eyes don’t cry no more,” he says at one point.)

Henderson wrote that the story reflects a slice of black life “not solely defined by suffering or even race.”

The characters are genuine, and their conversations were authentic, especially the banter that flies back and forth between the band members – young, black men who reach out to Bud (Devin Clark) when he needed them most.

Despite his solid performance, I had difficulty at times imagining Clark as a 10-year-old boy, perhaps owing as much to his height as to anything else.

Much easier to recognize was the black-woman love of Bud’s departed mother (Nicole Watts), whose spirit appeared on stage throughout the show to help move the narrative. And then there was Tracie Frank, who plays the role of a softhearted jazz singer who became like a surrogate mom to young Bud. (Unfortunately, she sings only one song, but it’s enough to display her impressive vocal skills.)