A peek inside Firehouse Bar & Lounge, soon to be Charlotte’s newest hot spot

Owner Clarence Boston said he hopes the lounge, located near Bank of America Stadium, will attract young professionals of all races looking to meet, eat and greet. 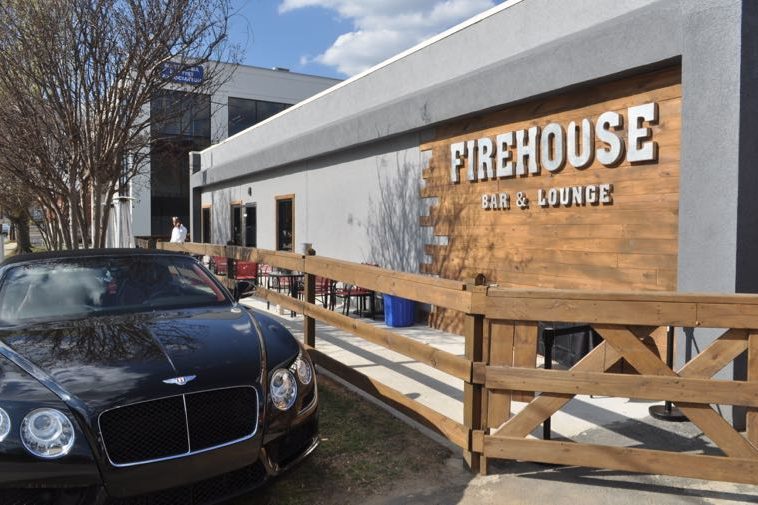 After months of planning and preparation, the Firehouse Bar and Lounge is set to open Friday at 320 W Carson Blvd., right in the shadow of Bank of America Stadium and in close proximity to lots of new apartment buildings.

Owner Clarence Boston, who also owns Boston’s Mortuary (4300 Statesville Rd), said the lounge will have a legal occupancy of 80 people, plus another 50 or so on an outside patio.

On Wednesday, Boston and his business partner held a soft opening.

“Actually, it exceeded my expectations,” he told me earlier that day. Qcitymetro broke the Firehouse story back in December, when the building was just a shell. Boston had bought a 1970s-era fire engine that was converted into a food truck, where all the meals will be cooked.

In addition to a full bar and hookah pipes, the lounge will open with a menu that includes fried lobster tail ($15), shrimp basket ($13), six wings & fries ($10) and shrimp & catfish ($20). But that’s not where Boston plans to really make his money. He said he hopes the lounge will attract young professionals of all races looking to meet, eat and greet. And he also plans to market the spot in social circles that include professional athletes and big-time promoters.

“We’re looking for people who can pay like $2,000 for a cabana and couple bottles of liquor,” he said. (About those cabanas… Hold that thought.)

Just a few days ago, a group of promoters who work with singer Rick Ross dropped by to check it out, filling the small parking lot with a fleet of luxury cars the likes of which most of us will never own. Given its occupancy limitations and limited parkings, Boston said he doesn’t plan to cast his marketing net too wide, at least not at first.

“We don’t want people coming and getting mad at us because they can’t get in,” he said.

Next month, Boston said, he plans to start work on an in-ground pool (16×30 feet) that will have its own bar and cabanas. He plans to call it Wet. He said it will operate separate from the lounge and will have a Vegas feel.

Inside, the lounge is filled with black chairs and leather sofas. Two swings hang from the ceiling at one end of the bar. The place even has a small VIP section. Boston, who likes to enjoy himself, said he decided to open the lounge because he grew tired of dropping dollars at local spots that didn’t seem to respect his patronage. He said he plans to let his business partner handle the day-to-day management.

“I doubt very seriously that I will be there every day,” he said. “And when I go, I’ll try to go as a customer and not as a worker.”

Firehouse will be open Tuesday through Saturday from 5 p.m. to 2 a.m., and on Sunday from noon to 2 a.m. Boston said the lounge will open early on Sunday because he wants to catch the brunch crowd.