Both institutions, currently separated by less than a mile along the Beatties Ford Road corridor, were founded in 1867 – two years after the end of the American Civil War. 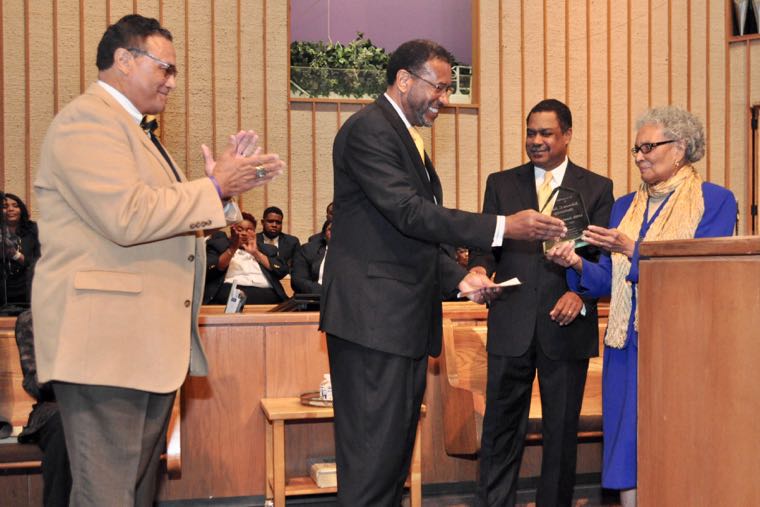 Both institutions, currently separated by less than a mile along the Beatties Ford Corridor, were founded in 1867 – two years after the end of the American Civil War. And both are in the midst of yearlong celebrations commemorating their respective milestones.

Taking his sermon from Palm 121, the Rev. Rickey A. Woods, senior pastor at First Baptist Church-West, spoke of God’s protection that has guided JCSU for the last century and a half – through wars, depression, and social and economic turmoil.

The church presented JCSU President Ronald Carter, who will be stepping down later this year, with a crystal shaped to resemble the school’s Golden Bull mascot.

George Bingham, JCSU class of 1979, noted some of the many accomplishments that occurred during Carter’s tenure as president – online courses, evening classes for adults, a graduate degree program in social work, a $26 million science center and completion of the mixed-use development known as Mosaic Village.

The church is home to several JCSU alums, including one of its oldest graduates, Mildred Grier, class of 1945.

Carter thanked the church for its recognition and challenged the congregation to help educate and make opportunities available for young people.

“I have never doubted that when congregations of the righteous and institutions of higher education form a seamless partnership, we can build sustainable assets in a community that women, men and children experience as the kingdom of God,” he said.