Carter was pleasantly surprised by the warm welcome he and other HBCU leaders got at the White House, but serious action is now required, he said. 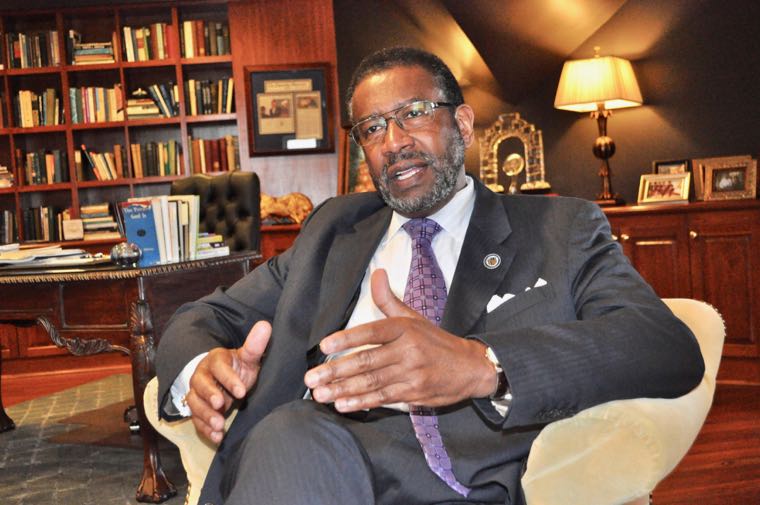 Carter, who joined other HBCU leaders at the White House, told Qcitymetro that a positive outcome will ultimately require sustained dialogue and commitment from both sides, as well as from Congress.

Trump on Tuesday signed an executive order moving the White House Initiative on HBCUs into the Executive Office from the Department of Education. The HBCU leaders hope that by moving the initiative, the needs of their schools will now get higher-level attention.

What the university presidents didn’t get, but desperately wanted, was a commitment from the Trump administration to spend more cash assisting HBCUs.

According to published reports, the federal government allocates about $700 million to HBCUs annually from grants, contracts and appropriations, and more than $3 billion annually for student aid.

Carter said the HBCU presidents would like to see the federal government set aside additional dollars – an amount well into the billions – for “aspirational funding,” money that would go to needs such as Pell Gants, building construction, campus infrastructure and discretionary spending to improve the schools’ overall ability to educate students.

Carter said HBCU leaders – some representing private schools and others representing public institutions – did not go into Tuesday’s meeting well-prepared or with a unified voice concerning their financial needs.

“I was very disappointed,” he said. “It doesn’t make sense for us to go in with three different points of view and them saying, well which one are we supposed to address? So we’re going to have to do our own homework there as well. I think it’s a matter of sitting down and giving thought to this.”

The Welcome They Received

The Historic Nature of the Meeting

“It was eventful in the sense that it’s the first high-level meeting with as many HBCU presidents, I think, in the modern history of the black colleges’ and universities’ relationship with the White House. So I will not take that away from them, and I say kudos for their hospitality and for the way they really stepped out to welcome us.”

“She clearly was out there in charge. She has this passion. She’s the one who said, “I want you folk to meet the president in the Oval Office.” She delivered the chief of staff, Kellyanne Conway, Steve Bannon, and they spoke. …I take my hat off to her. I don’t know her. I’ve just seen her on television. I’ve heard people talk about her, good and bad, but as I just sat dispassionately back, and I stayed back just to observe. I have to admit, she has a lot of energy and she wanted certain things to happen and she made it happen.”

“He (Trump) wanted to greet us personally, and he said, according to Manigault’s statement to us, he did not want to walk into a room where we were seated. He literally wanted us to come into his Oval Office and meet him there.”

“That was reduced to one minute, and I think we managed to get maybe seven or eight public and private presidents to speak. So it was not a listening session in a deep sense, as much as I saw it as an opportunity to meet and greet and to say we will have talks. In South African parlance, we talk about “talks about talks.” So that’s what I saw this as — the beginning of talks about talks.

Who spoke for North Carolina?

“Unfortunately, we were the ones not called to the mic because of time. Jimmy Jenkins, president of Livingstone College, was designated to speak on behalf of the private HBCUs in North Carolina, but unfortunately, we didn’t have that time at the mic.”

In this photo exists every comment on race and on respectability to be had on earth pic.twitter.com/5E2Q38dxaX

“Where I was positioned in the Oval Office, I did not see her. So it was after the fact. But what struck me about the entire visit was that everyone working in the White House was very laid back. I just didn’t sense a lot of formality about anything. From the time they met us, it was sort of laid back. It was almost like a Southern experience because she (Conway) came into the meeting before we were escorted into the Oval Office, she came into the meeting drinking from a can of Coca-Cola. She just sort of walked in like, “Hey, how y’all doing?” All of them were sort of laid back. So I don’t know how this is going to work in terms of state functions and all of that, but she was not the only one.”

Initial Skepticism About Meeting With Trump

“I think folks were very skeptical. I was skeptical. Is this just going to be a photo op? I finally had to say to myself, you don’t have to like people in order to develop relationships. And the fact remains, he is the president of the United States, and if we don’t build relationships, all we’re doing is harming HBCUs as institutions, particularly when we have to depend on voices in the White House and in Congress to push our interests forward. So if I’m just deliberately antagonizing you because you’re not the person I wanted to see in the White House, it’s not going to get us anywhere at all. So I think we all have to accept the fact that it is what it is, build relationships and let’s try to get as much as we possibly can out of this White House.

“Look, we all embraced President Obama, and we were very excited about him, but I still have a bitter taste around that Parent Plus loan and the damage it did to HBCU’s in particularly, and also the concern that when we requested a meeting with him to talk about the serious damage that was done, he did not agree to a meeting, or his senior people would not let us talk to him. So, it’s not a matter of whether you like or dislike. The question is, can you develop professional relationships to keep the needle moving?

Editor’s Note: In October 2011, the Obama administration made it tougher for parents with lackluster credit to borrow money from the federal government under the Parent Plus student loan program. HBCU leaders said this change hit their campuses particularly hard, forcing them to turn away students whose parents no longer qualified for the loans.

“It is not as elaborate as it looks on television. It’s not. I went in and I went, “This is it?” All those rooms we see on television, I went, “Oh, my lord, they need to do a little cleanup around here. I guess they do a great job staging it.”

“I left feeling that something good can come of this if all three sides (Trump, HBCUs and Congress) are working for a common purpose. So this is going to have to be a tripartite approach to making things happen. Great photo op for his office, but it has to be more than just a photo op. There has to be some substantial actions going forward.”