In the West African nation of Ghana, Christians embrace faith with fervor

In the capital Accra, it's common to see people studying the Bible on the bus, and many office workers keep open Bibles on their desks. 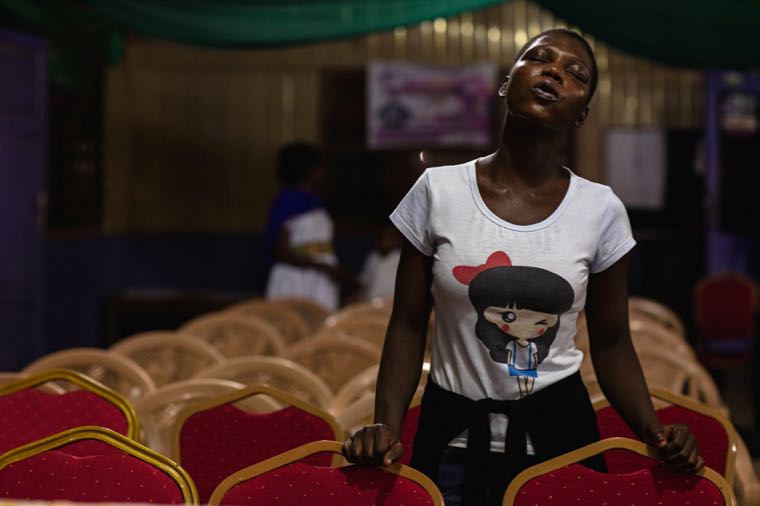 A member of the Victory Bible Church, Peniel Sanctuary, prays to usher in the New Year in Accra, Ghana December 31, 2016. REUTERS/ Francis Kokoroko

ACCRA (Reuters) – Ghana is embracing the Christian faith with a fervor that is increasingly shaping its national identity.

The country is central to a wave that puts West Africa at the heart of global Christianity, said professor Kwabena Asamoah-Gyadu of Trinity Theological Seminary in Accra.

More than 70 percent of Ghana’s 26 million people are Christian. The statistics understate the fervency of everyday faith. Many attend church on weeknights. All night prayer vigils are common, and billboards advertising Christian meetings line the streets.

It’s common to see people studying the Bible on the bus, and many office workers keep open Bibles on their desks. Mega-church pastors such as Mensa Otabil are revered, according to opinion surveys.

“By the middle of the 20th century, scholars … started predicting that Africa (and Latin America) was going to be the hotbed of Christianity,” said Asamoah-Gyadu, an authority on African Christianity.

“What happens in the minds of African Christians was going to shape church history for many years to come,” he said.

This shift comes as church attendance in the United States continues to erode, which an increasing number of Americans describing themselves as unaffiliated with any denomination or faith.

Some 41 percent of the world’s 560 million Protestants live in Africa and that number could rise to 53 percent by 2050, said an article this year in the International Bulletin of Mission Research. Muslims are a minority in Ghana.

Isaac Ollennu’s story is typical. The 36-year-old Accra resident works with a Chinese import company, putting him in the middle class. He says he prays throughout the day and often wakes at 3 a.m. to pray.

“My faith is everything to me,” he said.

Christianity was brought to the Gold Coast by Roman Catholics and mainstream Protestants, but Pentecostal faith featuring ecstatic worship and a God of miracles has underpinned the recent rise of faith, said Asamoah-Gyadu.

“Pentecostal religion promises breakthroughs … You tithe, you pray and you will get (what you want),” he said. Churches spread because authority flows through spiritual experience, rather than church hierarchy or formal education.

An appeal to social aspirations

Charismatic faith came from North America, and people were receptive because it chimed with traditional beliefs in which people appeal to spirits to solve problems, he said.

It also appealed to social aspirations. Wealthy pastors are seen as blessed, and their entertaining, informal services cater to popular taste.

“There’s a new generation that doesn’t want to apologize for being African and also wants to embrace Christianity,” he said.

Click to view a photo essay associated with this story.