Health Director Marcus Plescia said he requested the meeting to discuss the recent revelation that 185 low-income women where not given timely notice after their pap smear results showed abnormalities. 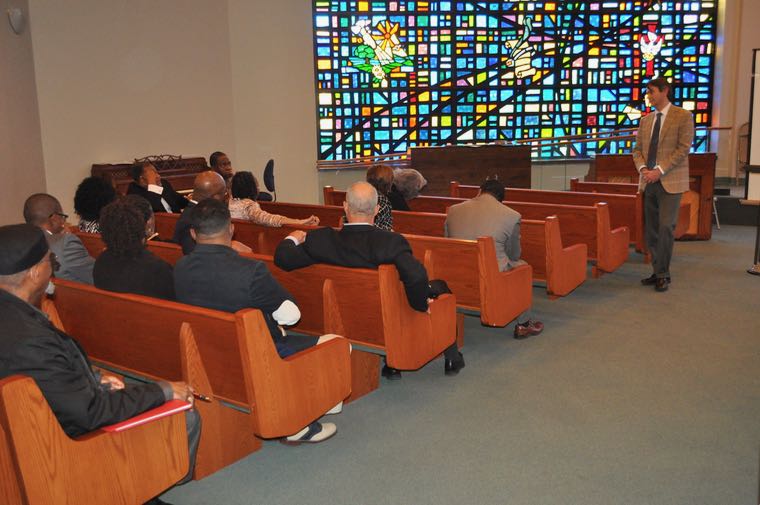 The head of Mecklenburg County’s Health Department met with a group of African American ministers on Monday to discuss recent revelations that nearly 200 low-income patients who participated in a cervical cancer screening program last year were not told of their abnormal test results for as long as eight months.

Health Director Marcus Plescia apologized for the delay and pledged to correct what he said were systemic failures.

The two sides discussed forming aa advisory committee made up of pastors representative of the county’s demographics.

In a later interview with Qcitymetro, Plescia called the idea “fantastic.”

Plescia’s request to meet with African America pastors is indicative of the role the black church has played in supporting county health initiatives. Its Village HeartBEAT program, a faith-based initiative to combat chronic conditions in communities of color, is backed by dozens of black and Latino congregations.

Of the roughly 185 women who were not given timely notifications of their pap smear results, fewer than a dozen have not been located, Plescia told the preachers. That number was down from about 20 last week.

He said Health Department workers have been sent into neighborhoods to find the women affected.

“I do think we will get that number down much lower than that,” Plescia said.

County officials said the women affected were all tested during an eight-month period in 2016. (More than 2,000 women were tested in total during that period, Plescia said last week.)

Plescia said an abnormal pap smear result does not always indicate a serious medical condition. In most cases, he said, abnormalities disappear with retesting.

County officials said they traced the notification problems to one nurse who did not follow protocol. As a result, four people who were once employed by the Health Department are no longer there, officials said.

The Health Department also has hired an outside consultant to review how its clinics operate. It also has invited the state to conduct a review.

At Monday’s meeting, some of the pastors in attendance said the Health Department must work hard to rebuild trust in the black community. Others suggested ways the black church might help.

“When we look at this situation, public perception is very important,” said Bishop Wade H. Ferguson of Fifteenth Street Church of God. “One of the things that we continue to see with those of lower economic status is that they get caught up in system failure and process. Public trust is like character; it’s better kept than recovered.”

The Rev. Ricky A. Woods, senior pastor at First Baptist Church-West, said he was concerned that the Health Department not become a “political football” as a result of the problems exposed.

“Health issues in our community are too vital, to important, to allow that to take place,” he said.

Plescia said after the meeting that he felt the exchange went well.

“I felt a lot of support,” he said. “This is about a community that the African American ministers are here for. I appreciate their willingness to hear what we had to say and understand what the problem is.”