Soul Food Sessions returns with a ‘Journey Through the African Diaspora’

Four months after their first collaboration, five African American chefs from the Charlotte area are reuniting to produce a culinary journey that harkens to the true African roots of soul food. 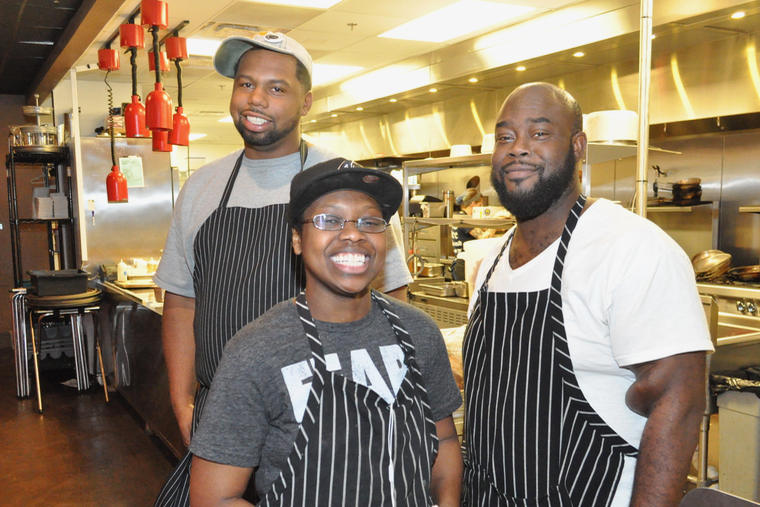 Take everything you know about Soul Food and throw it out the window. The Soul Food Sessions collective is back with the second installment of their dinner series, Journey Through the African Diaspora, and this one, held Feb. 27 at Passion8 Bistro, promises to take guests even further than the last.

Back in the fall of 2016, Greg Collier, chef and co-owner of Dawn Café on South Tryon and The Yolk in Rock Hill, joined forces with What the Fries food truck proprietors Jamie Barnes and Gregory Williams, personal chef Michael Bowling and pastries expert Jamie Suddoth to create a Southern soul food dinner unlike any other. In the landscape of high-concept dining, an African-American head chef is rare. That most of the Soul Food Sessions chefs have their own entrepreneurial concepts doesn’t seem coincidental.

“People said to us, ‘Why all Black chefs? You don’t see all-white chefs’ dinners.’ But until we did it, that’s all you saw. The tagline wasn’t needed because it was already understood that chefs’ dinners would be all white,” Bowling said.

However, the Diaspora dinners are about more than Black chefs making Black food. These are five African-American chefs mining their collective culinary past. They stipulated only one rule: No fried chicken.

“We were just trying to show that you can do more with soul food; not fried, buttered and sugared everything,” Collier said. “So, I did a smoked sweet potato soup that was vegan. That’s not traditional soul food.”

Traditional or not, Collier ended up breaking his own rule with fried chicken skewers and watermelon hot sauce (“Just to be belligerent,” he said). But this tendency to take familiar flavors and elevate them with a twist became a calling card for the collective. The habit returns for this second dinner, which incorporates African and Caribbean influences.

Sam Dotse, a line cook at Passion8 Bistro, draws on her Ghanaian heritage to drive the West African flavors of the eight-course meal. She’s making jollof rice, waakye (pronounced wa-chee)—black eye peas and beans cooked together, traditionally served with a red tomato stew—shito, which is a spice of onions, garlic, chilies, dried shrimp and dried fish, and gari, a dish of dried and toasted cassava.

“Waakye is the Ghanaian version of rice and beans,” Dotse explained. “I wanted to do a fine dining version of it, so instead of cooking rice and beans together, I’m doing a black bean puree and a farro salad tossed in suya, a spice of the Hausa people of northern Nigeria. The spice mix has cayenne, cloves, cornmeal, and sometimes there’s peanuts in it. Peanuts are a huge protein in our diet.”

In fact, as part of the first course, peanuts hold a significant place of honor in this dinner. The chefs sourced Carolina African runner peanuts from Nat Bradford, an eighth-generation farmer from Seneca, S.C., known for growing heirloom produce without chemical pesticides or fertilizers. Brought to the Americas in the 1600s by enslaved West Africans, the once-popular nut had gone nearly extinct. It’s currently experiencing a tiny revival: Bradford grew 1,000 pounds of the incredibly fragrant, tiny legumes in 2016. The Soul Food Sessions chefs negotiated to get them on the Diaspora menu first, beating out big-name chefs in the highly competitive culinary scene of Charleston, the food capital of the South. “This is amazing,” noted Bowling. “We’re introducing a product that hasn’t been used in mass production in the U.S. since the 1800s. When you get peanuts now, they’re GMO and this, that and the other, but these are real. This is like tasting the earth. And the fact that it’s a product that came over with our people when they first came over and we’re going to get to actually use that and taste that and reintroduce it to people, it brings something out of you.”

Collier chimed in. “We’re getting our stuff first, versus getting it after someone else has gotten to it. We get to make it hot. Not one of the Charleston chefs, we’re getting to play with them first.”

And when the first batch came in, play they did: boiling them, roasting them and drying them to investigate all the different flavor profiles. They settled on pickling them, and they will be served with Jamaican coco bread, jerked beef tartare and an egg aioli.

Bowling and Collier don’t look like Charlotte’s typical high-concept chefs. They don’t sound like them, either. Bowling, from Chatanooga, and Collier, from Memphis, are comfortably, unapologetically Black. They snap jokes on each other, tease and talk with the ease of barbershop dons. They’re versatile, seamlessly switching between high-end kitchens, diners and food trucks, to personal home grills at family reunions. Passion8 Bistro, the location of this month’s dinner, is a gorgeously appointed, hushed environment. But on the 27th?

“Wu-Tang. The DJ is making a nice mix for us,” Bowling says. “It’s going to be a good time. Soul Food Sessions is about food and fellowship. We want everyone to laugh, have a good time, eat great food, learn something about the food, and then go spread that joy, that love, that education to other people.”

Cooking for a Cause

A portion of the profits from the Diaspora dinners goes to a different charity every time. This month, it’s the Sickle Cell Foundation. The initial dinner supported Charlotte’s Community Culinary School. The group’s long-term goal is to form a nonprofit and create a minority scholarship foundation for hospitality students studying at schools such as Johnson & Wales.

“A lot of potentially great chefs drop out because they can’t get the financial assistance they need,” Collier said. “It’s not because they can’t do the work, it’s that they can’t afford to be there. We can help fill that gap from time to time for some of those students who are really doing well and need that helping hand. Hopefully we can buy some books, an actual knife kit, things of that nature. Mentorship and knowing you have that support matters.”

“The first Diaspora dinner was such a success, we realized ‘Hey man, we can do this’,” Bowling said. “We can make this something more than just five folks sitting in the kitchen and cooking. Now it’s blossomed into something else, and our goal is to make sure it continues to grow.”