Unless the controversial law is repealed, the state may lose NCAA championship events for the next six years, a sports official told state lawmakers on Monday. 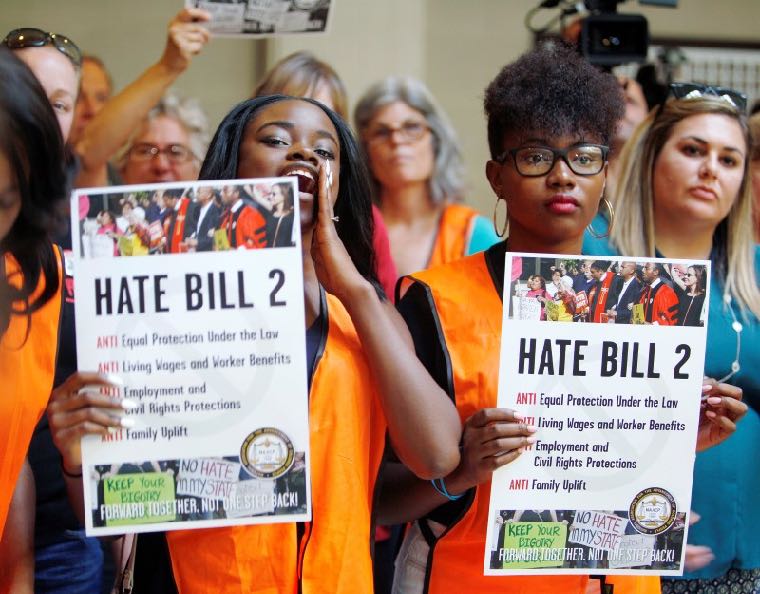 Members of the black community shout out their opposition to North Carolina's HB2 "bathroom law" that restricts members of the LGBT community from using the bathroom of their choice, during a demonstration inside the state legislature in Raleigh, North Carolina on May 16, 2016. REUTERS/Jonathan Drake

North Carolina is close to losing NCAA championship events for six years at a cost of more than $250 million because of House Bill 2, a sports official told state lawmakers on Monday.

The NCAA is reviewing bids to host events through spring 2022, including 133 from North Carolina cities and universities, said Scott Dupree, executive director of the Greater Raleigh Sports Alliance.

HB2, which bars transgender people from using government-run restrooms that match their gender identity and limits local nondiscrimination protections, will doom the state’s chances, Dupree wrote in a letter.

“Our contacts at the NCAA tell us that, due to their stance on HB 2, all North Carolina bids will be pulled from the review process and removed from consideration,” Dupree said, adding he was sharing the information on behalf of the North Carolina Sports Association.

Asked for comment, the NCAA said it expects to announce its site selections for upcoming seasons in April.

Responding to Dupree’s letter, Gov. Roy Cooper, a Democrat, again called on Republican lawmakers to repeal HB2, saying “there is no time to waste.”

“The bipartisan votes of both Democrats and Republicans are there for repeal if the Republican legislative leadership will just put it to a vote,” Cooper said in a statement.

The NCAA in September moved championship events, including two rounds of the Division I men’s basketball tournament, from North Carolina for the current academic year in protest of HB2. Other sporting events and entertainers also have boycotted the state because of HB2.

“In a matter of days, our state’s sports tourism industry will suffer crushing, long-term losses and will essentially close its doors to NCAA business,” Dupree said. “Our window to act is closing rapidly.”

A repeal bid failed during a one-day special legislative session in December.

In a statement, he said Cooper would “have to work toward a compromise that keeps women from being forced to share bathrooms and shower facilities with men to move past this distraction.”