When art is an expression of the soul’s pain: A collection by Alison Saar at the Gantt Center

The plight of women and the historically dispossessed is a recurring theme in a collection of works by contemporary artist Alison Saar, one of four new exhibitions at the Harvey B. Gantt Center. 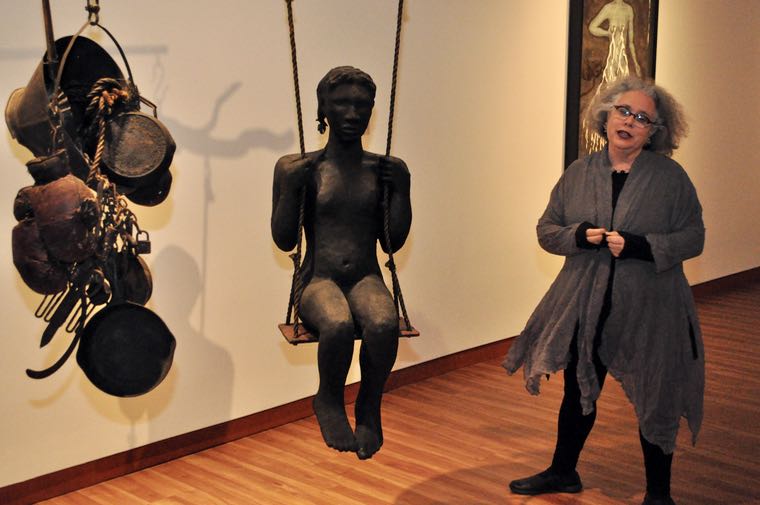 Contemporary artist Alison Saar stands beside "Weight," one of her pieces currently on display at the Harvey B. Gantt Center, January 17, 2016. (Photo: Glenn H. Burkins for Qcitymetro.com)

At the Women’s March Los Angeles, contemporary artist Alison Saar carried a big, pink sign with a “vicious cat” drawn on it. But it was the words on that sign — “This pussy bites. Keep your tiny hands off my reproductive rights” – that brought home her message.

In some ways, an exhibition of her works now on display at the Harvey B. Gantt Center delivers an equal gut punch.

Bold, arresting and on some level dark, The Nature of Us grapples with motherhood and the role of women in society, especially as those women have been historically dispossessed. The collection includes sculptures, mixed media, and prints.

From the moment one enters the gallery, where the female form is suspended, mounted and ripped open as artistic tropes of societal injustices, it becomes clear that this will not be an exhibition easily or quickly digested.

“It comes from a lot of different places,” Saar told Qcitymetro of the exhibition. “Some of this work really dealt with myself and my role as a mother.”

Like the piece inspired by the emotional loss she felt when her two children went away to school six years ago, leaving her to wonder about her new role as a women.

Other pieces speak to politics or social injustice.

“The political climate as of late has had a huge effect on me,” she said, “so I guess the next body of work will be more angry stuff.”

That’s right; when Saar talks of her work she often uses words like “angry” and “dark.”

Yet in her next breath she speaks of “love,” “generosity” and “inclusion.”

“I think generally I am a happy person,” she said, conceding that her work does not necessarily reflect that self-image.

For Saar, producing art is cathartic, a way to “purge that stuff and kind of shake it off without, you know, like, strangling someone or doing something violent.”

She also knows that creating art is not enough, so she talks with equal passion about the need for people of conscience to get involved, “whether it’s demonstrating or donating or whatnot.”

“I would say I feel really fortunate that I’m able to live and work as an artist and have a career and have a family and have a home,” she said. “Those are all just really wonderful things. I just wish the rest of the world wasn’t so messed up. I just wish people were kinder to each other and more understanding.”

One of her signature pieces at The Gantt is titled “Undone.” It features a female form seated in a chair, mounted 14 feet above the floor. The woman’s body is draped in sheer fabric, stringy objects dangling down from between her legs, coalescing in bottles.

“Basically, I was trying to see this piece as this woman, and these are all these veins coming out of her uterus,” Saar explained. “It’s the idea, sort of, ideas and dreams, aspirations, that are kind of on the verge of being aborted.”

She said the work illustrates how woman are often asked to sacrifice their own ambitions for the needs and desires of others.

Saar, who lives in Los Angeles, grew up in a home where art was paramount. Both of her parents and her sisters are artists. Saar’s own artistic career has spanned more than three decades.

Saar’s work has been exhibited nationally and internationally and her permanent site sculptures can be found across the nation, from Los Angeles to New York. She works primarily in sculpture but also incorporates prints, paintings, and works on paper in her practice, most often with a focus on the female form.

The plight of the dispossessed in society, especially as it affects women and girls, is a recurring theme in her work.

Saar said she was “devastated” on the night of Nov. 8, 2016, when Hillary Clinton lost to Donald Trump in the presidential election.

She had spent the day in San Francisco and had planned to fly to Portland, Oregon, to celebrate Clinton’s victory with her 22-year-old daughter.

“I told her I’d pick up a bottle of Champagne on the way home from the airport,” Saar recalled. But as she waited for her flight, election results took an unexpected turn.

“So, instead of getting Champagne, I went to my daughter’s and we went to a bar and we cried in our beer.”

“Her entire household was weeping,” Saar said. I think it was really hard for them, their first opportunity to vote for a president.

Saar said her art, so far, has not found voice in Clinton’s defeat.

For much of the past two years, she said, she has been working on a collection that explores the Great Mississippi Flood of 1927 and how African Americans were affected by that tragic event and how it was repeated in 2005 via Hurricane Katrina.

That exhibition opens next week in Ohio.

Saar said she will now take time to clean her studio and gather her thoughts before tackling her next project.

“I’m sure it will somehow reflect what’s going on out there,” she said, “because it’s hard to ignore it, and the best way to vent it is to make art about it.”

“The Nature of Us” is one of four new exhibitions opening Jan. 28 at the Gantt Center. They will run though July 8. Visitors on Saturday (Jan. 28) can tour the Gantt Center for free as part of ASC’s Connect With Culture Day, which offers a variety of fee cultural experiences throughout Mecklenburg County.