Until House Bill 2 is repealed, the option of moving the CIAA tournament to another state will remain in play, organizers say. 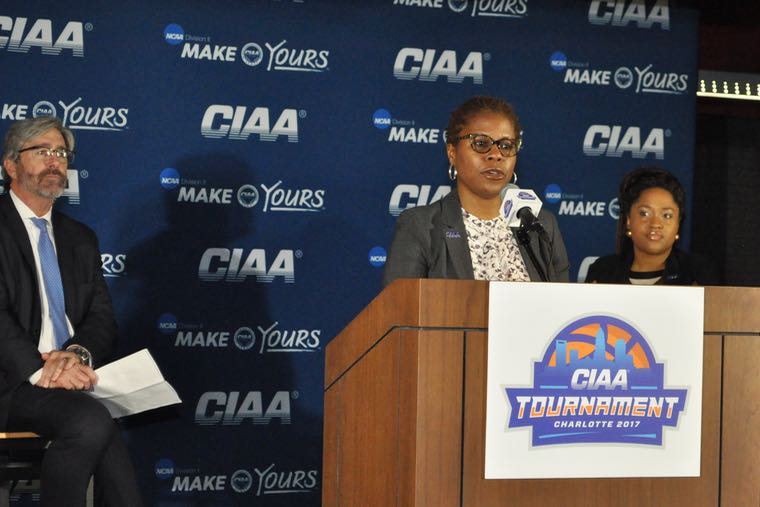 Even as the CIAA basketball tournament prepares to return to Charlotte Feb. 21-25, the controversy over House Bill 2 continues to cloud the tournament’s future in the city, Commissioner Jacqie McWilliams said Wednesday.

Under its current agreement, the tournament is scheduled to remaining in Charlotte through 2020. But tournament directors have not ruled out leaving North Carolina if Republican lawmakers in Raleigh refused to repeal HB2.

“It’s not a closed issue,” McWilliams told reporters at Bojangle’s Coliseum, where early-round games will be held this year.

McWilliams said the CIAA’s board of directors will meet after this year’s tournament to once again take up the question of HB2 and the tournament’s future in the state. Of the conference’s 12 schools, eight are in North Carolina, which makes moving the tournament difficult.

“By the end of the academic year, we’ll need to know exactly where we’re going,” McWilliams said. “It would be nice for us, as we’re planning, to know before, but I think the board will know the best timing to pull ourselves together to reconvene the conversation.”

The North Carolina General Assembly passed HB2 in March 2016 to nullify a Charlotte ordinance that would have allowed transgender individuals in public building to use bathrooms that correspond to their gender identity. Since the law was passed, the state has lost millions of dollars in business as companies and sporting events pulled out in protest.

Johnson C. Smith University President Ronald Carter, who chairs the CIAA board of directors, said moving the tournament to a different state because of HB2 would be a “great tragedy.”

However, he said, “…we also have to be true to the principles of the CIAA, and we’re still very concerned about this issue of HB2. We are not going to discriminate against any of our athletes. And if we don’t get this right, I don’t know how my board members will respond and whether or not we’ll be able to keep the CIAA in Charlotte.”

In a show of symbolic protest, the CIAA board voted last fall to move eight of the conference’s 10 championship events out of the North Carolina, but the board stopped short of moving the basketball tournament, which each year attracts tens of thousands of fans and alumni to Charlotte and brings in millions of dollars of revenue to the city.

Inside the mind of Ronald Carter: His thoughts on leaving JCSU, his fears for America’s future and more

“It’s a discussion we have had and will continue to have,” Carter said. “We have got to solve this problem.”

With the issue of LGBT right now front and center in the state, tournament organizer this year have planned a series of events – including a town hall discussion – to spotlight what McWilliams said is the CIAA’s commitment to diversity and inclusion. The conference hired New York consultant Nevin Caple to lead that effort.

Caple said her role is to look for opportunities to lift up those affect by HB2 and to help the tournament and its member schools create on-campus environments that encourage all forms of diversity.

“Obviously we can’t change the law, but we can leverage our platforms to encourage and inspire the community,” she said.

McWilliams, the conference commissioner, said she’d like to see more local resident attending this year’s tournament events. In her encounters around the city, she said, she often meets people who say they don’t attend CIAA events for various reasons.

“It’s our conference. It’s our tournament. It was founded by us almost 106 years ago, and it’s supported by us in our own community,” she said. “…We want the local community to engage, as well as those who are visiting here in the area.”

McWilliams said tournament officials continue to meet with police and business owners to ensure a good experience for fans coming to the city. In previous years, fans have accused local businesses of price gouging and imposing surcharges during CIAA Week. The tournament also has been marred by isolated violence at parties unrelated to official events.

“You can control some things, and some things you can’t,” McWilliams said. “For us, it’s to make sure we have the measures to control what we can.”