Inside the mind of Ronald Carter: His thoughts on leaving JCSU, his fears for America’s future and more

Speaking at the Tuesday Morning Breakfast Forum, the president of Johnson C. Smith University was full of optimism and concern. 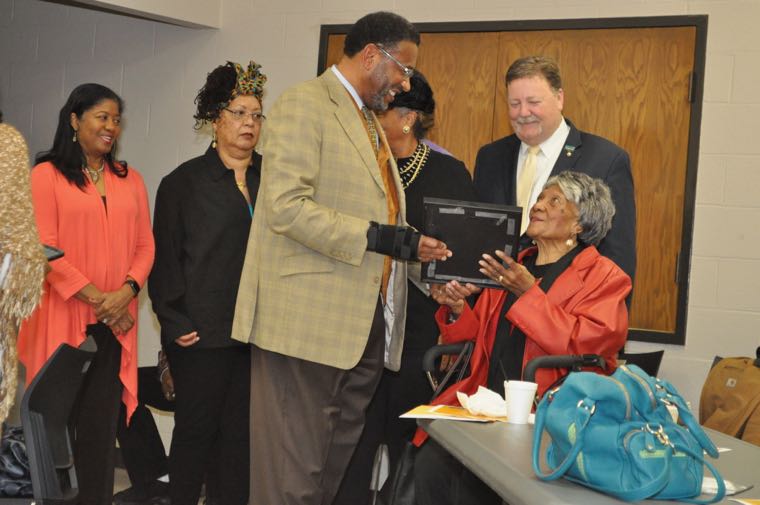 As Ronald Carter prepares to step down as 13th president of Johnson C. Smith University, he says he’s leaving behind an institution that’s “thriving.”

He also says he has no regrets.

Carter made those remarks during a wide-ranging talk at the Tuesday Morning Breakfast Forum – perhaps his final appearance there as top administrator at JCSU.

As for what comes next in his career, Carter told the group, “Well, when I get there I’ll let you know.”

Here are some other topics he discussed, either in public or later with Qcitymetro:

The future of JCSU once he is gone

“The mark of any good leader is that his or her absence does not stop the momentum. What I feel confident in is that we have systems in place for all the things we have been doing to continue… And so the successor, male or female, will not be called to make major changes — and now I’m speaking for the board of trustees — as much as this person will be called to develop institutional effectiveness around all of these successes. The goal is to know who that person is by June 30th, and then we will spend time making that transition possible. So while I have announced that my tenure ends on June 30th, it looks like I still may be around for another two months helping that person hit the ground running. We want that person to have sea legs to continue that momentum.”

“The board of trustees started a very robust discussion concerning the defining characteristics of the 14th president of the university. And the question was raised — What if the person had the defining characteristics but was not African American. There was a discussion about that, and the board felt, at this time, it probably would not be to the advantage of the university to have a person who is not African American. So that’s where the discussion ended.”

“The bench is short for educators, for administrators, who have demonstrated experience. That’s going to be the challenge. I’m not going to say to you that bench is long. It’s not. It’s not.”

“We are celebrating 1,456 students this spring semester. And so our enrollment is remaining. The one challenge that we are facing, however, is that our students all face a gap in affording educational experience. The average gap for our students is $5,000. That is the situation across the country. And I want you to pay attention to these issues on the higher-educational landscape, because if we cannot educate the majority of students who should be eligible to go to colleges and universities…we are going to have a very serious problem in this country.

“We have to be careful, very careful, that we do not allow an elite minority to rule the country. This has to be a country ruled by the majority. So we have to start now educating these young men and women, helping them close that $5,000 gap so that they have an opportunity to help this country move forward. Now I say this, and I will continue to say it as long as I have the bully pulpit — if we do not take the time to look at the transcendent trends happening on the higher-educational landscape, and make sure that there is a logic model guiding it, America by 2035 will begin to show signs of the old Apartheid South Africa. And I’m very serious about this. We’re already seeing Apartheid education emerging across the country, so you must pay attention to these issues as you look for new leaders.”

“When people ask what keeps me up at night, I look at the fact that by 2020, the majority of students in this country who should be eligible to go to colleges and universities will come from minority groups, and for the first time in the history of America, the white American student will be in the minority. Duke University now is majority-minority. And it’s happening all over the country. Now when I look at the policies and the legislation coming out of the Department of Education, whether at the national level or state or even in terms of local, I do not see our developing systems that will support the majority of these students. So if we miseducate the majority of minority students, then we are setting up a system where they will not be mobile, and we will see the system protect the minority elite. And what will be interesting about it…it will not be a minority elite of just white folk. It will be a minority elite of African Americans, Latinos, white Americans, and they will form a block to maintain their wealth at the expense of the country. These are the system I am seeing put in place. I lived in South Africa 10 year, and I know them when I see them, and that’s what happening here. So I’m saying to all of you, you’ve to pay attention to this, and when you see it, you’ve got to act on it. Nothing happens if we sit back and just talk about talks… It’s time to get beyond that. Do something. And if you’re not going to do something, get out of the way.

The decision to kill JCSU’s Education Department, which once trained black teachers

“It was a very difficult decision that the faculty and administration had to take… We simply could not demonstrate the quality of the program. In all honesty, the students who were going through that education program could not pass the Praxis Exams. And so we had to be honest with ourselves… What’s interesting is that, we were, early on, back in the history of the university, one of the first universities to offer teacher education. But there’s a lesson here. When that is not tended to in a very thoughtful and careful way, even successes can dry rot. We looked at the program and realized that it had dry rotted over the years, and we had no choice but to cut it in order to make room for new blossoms.”