Rep. Alma Adams: Those unhappy with the Trump agenda must get involved

In a meeting with staff members from the International House, Adams said ordinary people should tell Congress what they want. 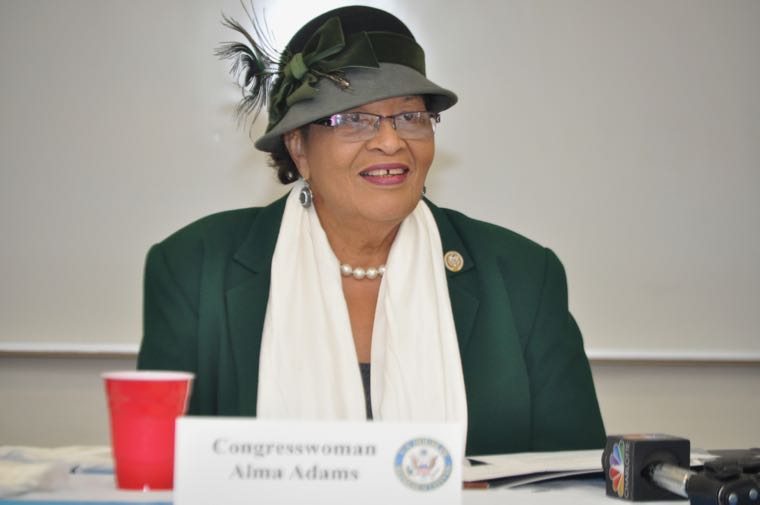 As Donald Trump and congressional Republicans get down to business this week, U.S. Rep. Alma Adams of Charlotte has a message for those unhappy with events in Washington: Get involved, she says.

In a meeting on Friday with staff members from International House, Adams said people who oppose the Trump and GOP agendas must organize and propose sound alternatives.

“What should we tell the Congress to try?” she said. “I can tell you some of the good ideas that have come out of the Congress have not necessarily come from congress people. Some of the best bills I ever had came from constituents.”

Adams, who represents North Carolina’s 12th congressional district, did not attend Trump’s inauguration. She said in a statement that she would spend the day working on issues important to voters.

At International House, Adams pledged support for “comprehensive immigration reform” and criticized GOP efforts to repeal the Affordable Care Act, which has removed an estimated 20 million people from the ranks of the uninsured but has been dogged by reports of escalating insurance premiums in some states.

Adams said that while the ACA is not perfect, it should not be repealed.

“If you have a crack in the wall, you don’t tear the whole thing down,” she said. “If you had a door broken, you wouldn’t go and break the whole building down. You go fix the door.”

Adams said efforts to repeal the health care law were primarily about a desire among Republicans to erase former President Barack Obama’s legacy.

“But history is going to show that he really is, I think, one of the best presidents we’ve had,” she said.

Anne Crotty, an immigration attorney at International House, a none-advocacy group that helps immigrants integrate into the community, told Adams that recent talk of building border walls and deporting undocumented immigrants has had a chilling effect on her clients.

Crotty said some worry that the federal government might resume workplace raids.

Adams said much of the focus on immigrants is a reaction to the nation’s growing diversity.

Adams said she’s willing to “give the president a chance” but said she also can’t ignore “many of the things that are taking place right now.”

“Like most of you, I am concerned about President Trump’s past comments toward immigrants, Muslims, refugees, people of color, women, etcetera,” she said. “The rhetoric has sent a message to many of the people who already live in this country who are not welcomed as residents and citizens of the U.S., and that’s a troubling kind of thing to me.”

Adams said those who oppose Trump’s agenda should “advocate aggressively as organizations, as individuals – each one teach one.”

“Sometimes I figure people have to get angry before they act,” Adam said. “There are lots of angry people out here. They are afraid.”