Speaking at the historic Ebenezer Baptist Church in Atlanta, the youngest daughter of the slain civil rights leader told the audience not to give up hope and "Don't be afraid of who sits in the White House." 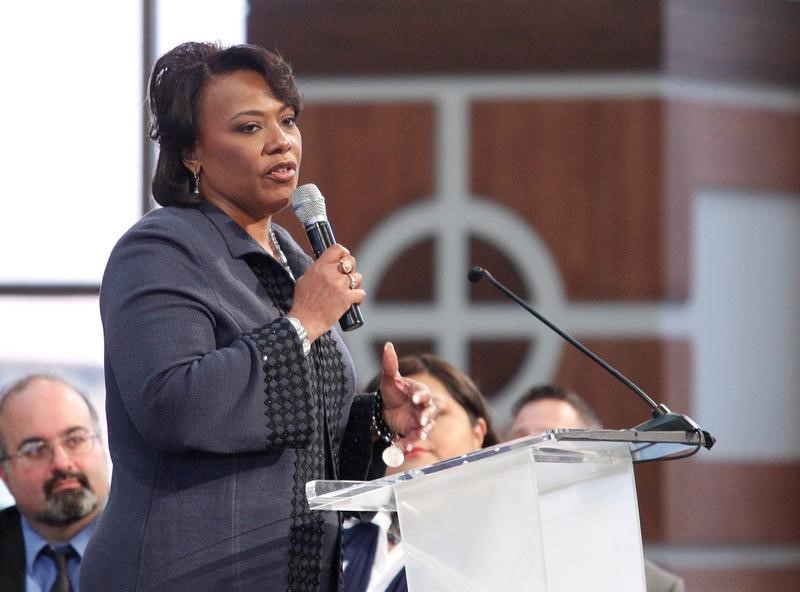 ATLANTA (Reuters) – The daughter of slain civil rights leader Martin Luther King marked the holiday that honors her father on Monday by siding with U.S. Rep. John Lewis over President-elect Donald Trump in an imbroglio that erupted over the weekend.

Lewis, 76, a contemporary of King’s who endured beatings and jail time in the fight for racial equality in the 1960s, said in a televised interview that he saw Trump’s election as illegitimate because of Russian tampering in the campaign, drawing a scornful response from Trump.

Bernice King, the youngest daughter of Martin Luther King, who would have been 88 years old on Sunday, was interrupted frequently by thunderous applause during an address at Ebenezer Baptist Church in Atlanta, the house of worship in Lewis’ district where King once preached.

She told the audience not to give up hope and “Don’t be afraid of who sits in the White House.”

“God can triumph over Trump,” she said, drawing a standing ovation.

Bernice King also gave a nod to Lewis by standing up for his congressional district, which Trump derided in his Twitter comments as “crime-infested” and “falling apart.”

“Many of you here are proud residents of the fifth congressional district and we are proud of the progress we have made here and in this city,” she said.

The service at the Ebenezer Baptist Church takes place every year on Martin Luther King Jr Day, a federal holiday honoring a man who championed the cause of racial justice until he was assassinated in 1968 at the age of 39.

This year it falls days before Barack Obama ends his second term as the country’s first African-American president. Trump takes the oath of office as his successor on Friday.

Lewis did not mention Trump in a half-hour speech honoring King at a breakfast in Miami that focused on the civil rights struggle, but urged young black Americans to consider voting a “sacred” act.

“Celebrate Martin Luther King Day and all of the many wonderful things that he stood for. Honor him for being the great man that he was!” Trump tweeted.

Trump, who won only 8 percent of the black vote, was scheduled to meet on Monday with King’s son, Martin Luther King III, at his offices in New York, according to a Twitter message from his spokesman Sean Spicer.

‘NO ACTION OR RESULTS’

The Trump-Lewis exchange began when Lewis told NBC News in segments of an interview released on Friday that he would not attend Trump’s inauguration in part because “I don’t see this president-elect as a legitimate president.”

He referred to the findings of U.S. intelligence agencies that Russia used hacking and other methods to try to help Trump, a Republican, defeat Democrat Hillary Clinton in the Nov. 8 election.

Trump was withering in his response the following day, saying in tweets that Lewis, a revered figure who risked his life for civil rights, was “All talk, talk, talk – no action or results.”

While many Democrats and Republicans said they disagreed with Lewis, they also questioned Trump’s decision to denigrate an African-American political leader of Lewis’ stature, especially over the Martin Luther King Jr weekend.

Civil rights leaders have also opposed Trump’s nominee for U.S. attorney general, Senator Jeff Sessions of Alabama, who was denied a federal judgeship in 1986 after allegations that he was racist and harbored sympathies toward the Ku Klux Klan, a violent white supremacist organization.

The Senate Judiciary Committee has received letters from 400 civil rights organizations opposing his confirmation to the country’s top law enforcement post, Democratic Senator Dianne Feinstein has said. Sessions strongly denied that he is a racist during his confirmation hearing in the Senate last week.