Local church honors Steve Crump and his 30 years at WBTV

The Rev. Ricky A. Woods said the congregation wanted to show its appreciation for the work Crump has done, especially his work in the African American community. 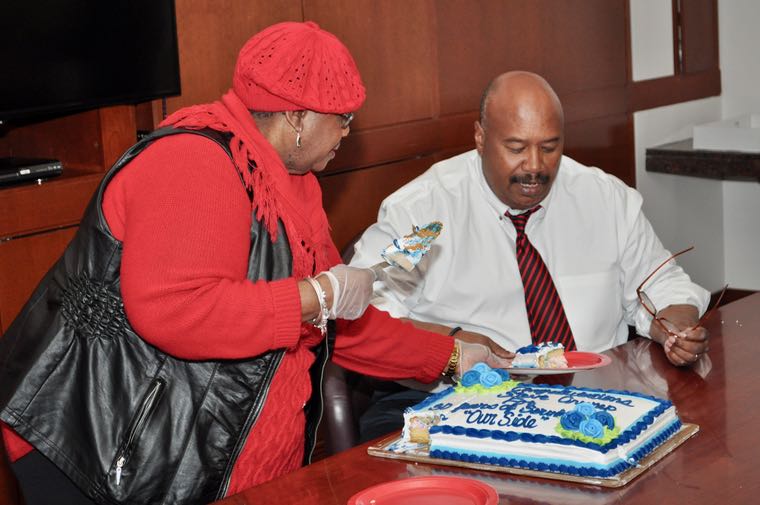 In an era when media outlets get no love, an unusual thing happened Wednesday at WBTV (Channel 3):  About a dozen members of First Baptist Church-West dropped in to honor veteran reporter Steve Crump, who this year marked his 30th year at the station.

The celebration was complete with cake, speeches and an award presentation.

The Rev. Ricky A. Woods, the church’s senior pastor, said the congregation wanted to show its appreciation for the work Crump has done, especially his work in the African American community.

“I think people who serve the community need to know that they have community support,” Woods said, “particularly when you’re doing news, because oftentimes you’re having to make arguments over why a particular story has to be covered, particularly if it’s a positive story coming from a side of town where we don’t get a lot of positive news.

“Steve has taught me so much about, in particular, black history over the years,” he said. “There is more black history walking around in that man’s head than maybe anywhere else except for Washington, D.C., now with the museum.”

Crump, who has produced award-winning civil rights documentaries, was honored this year by the National Association of Black Journalists with its Journalist of Distinction Award, which the organization gives each year to a journalist working in a small or mid-size market. Earlier this year, Crump made local headlines after he confronted a white man in Charleston who had directed racial slurs at Crump, who was in the city reporting on Hurricane Matthew. The man, Brian Eybers, 21, was arrested on charges of disorderly conduct and possession of drug paraphernalia. He later apologized to Crump and died at a Charleston hospital. Autopsy results were pending.

Looking back on his career in Charlotte, Crump told Qcitymetro that he has seen the city, and the news industry, undergo incredible change.

When he arrived at WBTV in 1984 (Crump worked at the station for three years then left and returned in 1989) Charlotte had no professional sports teams, few tall buildings and no outer beltway. Even the inner loop around center city had not been completed, he said.

“It’s no secret that I’ll turn 60 next year,” he said. “If God continues to bless me with good health, I want to do this as long as I can.”

Crump said the civil unrest that erupted in September after a Charlotte-Mecklenburg police office shot and killed Keith Lamont Scott shows that there is still work to do.

“Charlotte has been a place where we have oftentimes had just a very genteel spirit, where people could work things out,” he said. “…But when you see that kind of raw and vitriolic emotions, it shows that we’re not perfect, and we need to find ways of becoming perhaps more unified in what we do as a community and to reach across different ethnic lines and different cultural lines.”

He said local media has a role to play in that process – both with the articles and broadcasts they produce as well as through the work they do in the community.

CORRECTION: Steve Crump first went to work at WBTV in 1984. An earlier version of this article gave a different year. He worked there for three years then left and returned in 1989.