Based on a true story, this movie uncovers how three African American women helped shape the U.S. space program in the age of Jim Crow segregation. 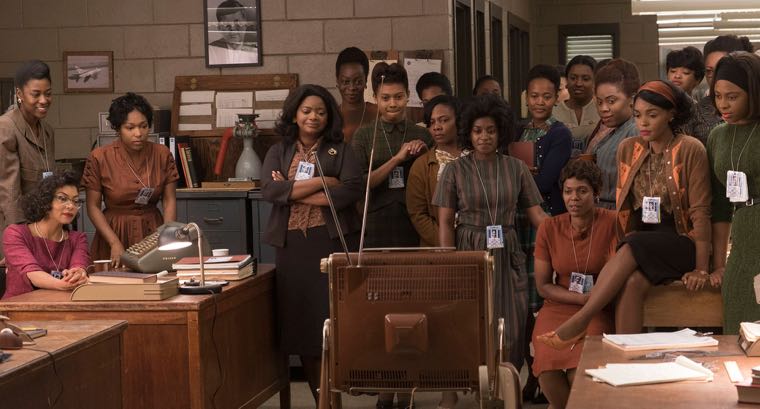 “Hidden Figures” is a slow burner of a movie that starts off simmering in a mix of facts and history before igniting into a blazing tale about the little-known role of African-American women in the U.S. space program.

At first glance, the untold story of Katherine G. Johnson (Taraji P. Henson), Dorothy Vaughan (Octavia Spencer) and Mary Jackson (Janelle Monae) looks like your standard girlfriend movie. The three socialize, raise families and carpool together in the segregated south of Hampton, Va., in the 50s and 60s.

But these nerdy women don’t work just anywhere; nor do they do just any work. At a time when the word “computer” referred to people—not machines—these women performed complex mathematical calculations that helped undergird the country’s red-hot space race with the Soviet Union.

While that’s noteworthy in a time of strident racial and gender discrimination, it has all the makings of a lukewarm historical film. It’s only when “Hidden Figures” settles into exploring the achievements of three, real-life women whose names have been largely lost to history that this movie finally catches fire – and yes, it does catch fire. Based on the New York Times best seller of the same name, “Hidden Figures” explores how astronaut John Glenn insisted on getting Johnson to confirm his landing calculations before his historic 1962 takeoff to become the first American to orbit the earth, how Vaughan became one of NASA’s first black managers and helped lead the way in computer programming, and how Jackson kicked in doors for women and blacks to become NASA engineers.

Like so many movies, “Hidden Figures” loads up on name-brand stars with uneven results.

Henson is pure kinetic energy in her portrayal of Johnson, a math prodigy who graduated from college at 18 and escalated from the computer ranks to the groundbreaking space task force. Each time Henson nervously pushes up her cat-eye glasses or silently suffers another racist indignity, the depth of her acting chops goes on full display.

The only problem with Henson is the viewer’s natural tendency to look for traces of Cookie, her sassy “Empire” persona. While Henson overcomes those expectations, the same can’t be said for her two costars.

Unfortunately, there just wasn’t enough in Spencer’s portrayal of Vaughan to wipe away visions of her Oscar-winning role in “The Help,” because once again, she is cast as the sly, all-knowing mother hen for a brood of sister girlfriends. And Monae was practically a carbon copy of the feisty, no-filter sister that another singer, Alicia Keys, portrayed in “The Secret Life of Bees.” The true stories of Vaughan and Jackson ultimately emerge, but primarily because of events rather than characters. Meanwhile, Kevin Costner totally owns the role of NASA administrator Al Henderson, while Jim Parsons is only partially successful at shedding his “Big Bang Theory” television persona (although he’s worth every minute of screen time if you’re a “Big Bang” fan).

Despite all that, “Hidden Figures” is that most elusive of movies, able to fire up a viewer’s imagination and leave you wanting more, trying to separate fact from movie fiction.

Director Ted Melfi recently told a group of Hampton University students that some characters and events were condensed for time and clarity but “what happens in the movie, and what is said in the movie, that’s 100 percent accurate.”

Of the three women, only Johnson, 98, remains alive, and she has said the movie “sounded very, very accurate.”

Last year, President Barack Obama awarded Katherine Johnson the Presidential Medal of Freedom. And in a few weeks, NASA will celebrate its 100th anniversary under the leadership of African American Charles Bolden, the agency’s top administrator. For more information, go to www.nasa.gov.