No criminal charges will be filed against a Charlotte-Mecklenburg Police officer in the September shooting death of Keith Lamont Scott, District Attorney Andrew […] 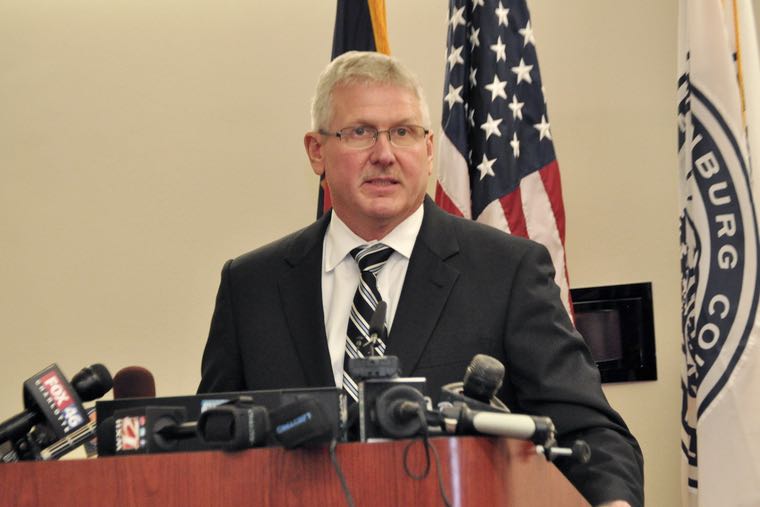 Murray said 15 career prosecutors reached a unanimous decision after a meticulous review of the evidence. It was a “difficult discussion” with Scott’s family, but they were “extremely gracious,” he said.

“No family should experience, let alone witness, what this family experienced,” Murray said before preceding with presentation of the evidence used in making his decision. He concluded that that the CMPD office, identified as Brentley Vinson, “acted lawfully when he shot Mr. Scott.”

Scott, 43, was shot by Vinson on Sept. 20 when Scott stepped from his parked SUV outside his apartment with a gun and ignored police commands to drop it, according to police reports.  The confrontation sparked two nights of sometimes violent protests in Charlotte. Autopsies show that Scott was hit in the stomach, back and arm.

Some residents who claimed to see the shooting insisted that Scott was not armed when he was shot by Vinson. Some suggested on social media and in local news reports that Scott may have been sitting in his truck, reading a book, while waiting for his children to get off a school bus.

Murray said Wednesday that no reading book was found in front or back seat of vehicle, but a  composition notebook was found wedged between front seat and console.

He also said private citizens who said on social media that they saw the actual shooting retracted those statements when interviewed by SBI. Another said he was simply repeating what he heard on social media.

Evidence points to a gun

Murray also cited evidence to refute claims that Scott did not own a gun. Based on text messages, Murray said Scott’s gun was traced to a private citizen who acknowledged selling the gun to Scott. Murray said that citizen not only identified the gun and ankle holder but also identified Scott as the man who bought it.

In an interview aired on CBS several weeks after the shooting, Rakeyia Scott said she believed the medication her husband took for his injuries had caused him to be confused by police officers’ demands.

Charles Monnett, one of the attorneys for Scott’s family, told WBTV Tuesday that they’re preparing for an emotional day Wednesday, no matter the outcome.

Monnett said the family hopes there is no violence if there are any protests following the announcement.

Murray said of the decision: “I know some out there are going to be frustrated.”

CMPD officers have been put on alert and will work 12-hour shifts beginning Wednesday in case violent demonstrations occur.

In two days of protests immediately following the shooting, one person was shot and killed;  more than a dozen police officers were injured; and more than 100 people were arrested.

Bowing to public pressure, CMPD Chief Kerr Putney later released dashboard and body-cam footage of the shooting. From neither vantage point can it be determined whether Scott is holding a gun, said The Charlotte Observer.

“The video does not give me absolute, definitive visual evidence that would confirm that a person was pointing a gun,” Putney said on Sept. 22. “I did not see that in the videos I reviewed. But what I can tell you, though, is that when you take in the totality of all the other evidence, it supports what we have heard and the version of the truth that we gave about the circumstance that happened that led to the death of Mr. Scott.”

A message to the community

Murray said his office was concerned only with the legality of the Scott shooting and not with CMPD policy or wether the officers acted properly within those policies.

And while acknowledging the need for “transparency,” he said, the interest of justice often demands “responsible transparency.”

Murray said that while his office found no legal justification to charge Vinson, he said the concerns of the community — and those who protested — should not be ignored.

Murray said that, while he cannot condone violence and destruction of property “I think it’s high time to recognize that this is Charlotte, and that not everyone experiences the same Charlotte.”

He added: “I want this community to know that I would not hesitate to prosecute an office who evidence showed acted outside the law. In fact we have, from assaults to DWI to fraud to, unfortunately, sexual offenses. We have prosecuted officers.

“It is my sincere prayer that no one is ever killed by police,” he said. “But I also pray that police are never placed in a position of ever having to make the decision to use lethal force to protect themselves or innocent lives around them.”

A spokeswoman in the DA’s office said concerned citizens should read the full report and submit any questions to community@charmeckda.com.