Trailing by more than 6,000 votes, Gov. Pat McCrory's campaign has questioned the validity of the posted results, alleging voter fraud. 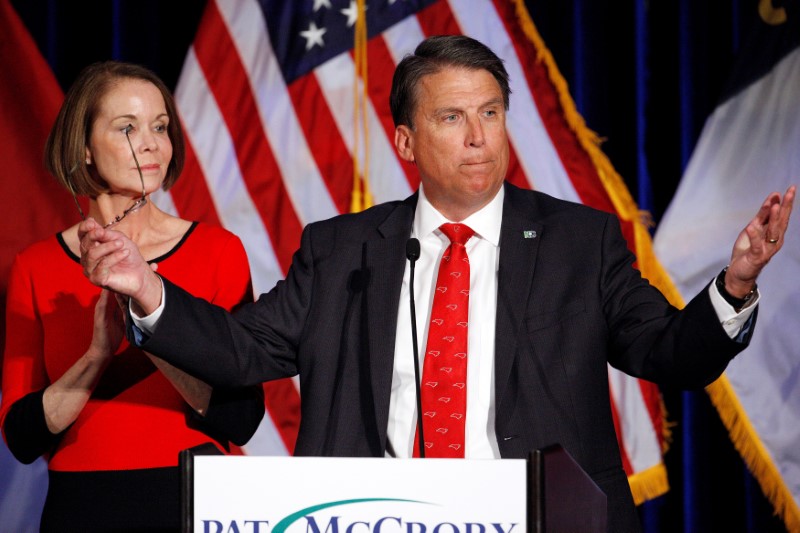 North Carolina Governor Pat McCrory tells supporters that the results of his contest against Democratic challenger Roy Cooper will be contested, while his wife Ann looks on, in Raleigh, North Carolina, U.S. November 9, 2016. REUTERS/Jonathan Drake

(Reuters) – North Carolina Governor Pat McCrory announced on Tuesday he has officially requested a recount of votes from the Nov. 8 election with official results showing him trailing his Democratic challenger, Attorney General Roy Cooper, by one-tenth of a point.

The gubernatorial race in the nation’s ninth largest state remained undecided two weeks after Election Day. Officials with the State Board of Elections were continually updating results as they arrived from the state’s 100 counties. (For official results see: http://bit.ly/2fV0APx)

A recount is mandatory if the margin is less than 10,000 votes once all 100 counties have finished their canvasses, a spokesman for the election board said. As of Tuesday afternoon, Cooper’s lead was 6,187 out of 4.7 million votes cast.

The election had been widely seen as a referendum on McCrory’s support for a state law denying transgender people the right to use the public bathroom matching their gender identities, instead forcing them to use those corresponding to the gender assigned at birth.

The law led to widespread boycotting of North Carolina by entertainers such as Bruce Springsteen and Itzhak Perlman while sports organizations such as the National Basketball Association and the National Collegiate Athletic Association moved major events out of state.

McCrory’s request came in a letter to the election board dated Friday and made public on Tuesday.

McCrory’s campaign has questioned the validity of the posted results, saying Cooper’s total may be inflated by votes from dead people or felons ineligible to cast a ballot.

“With serious concerns of potential voter fraud emerging across the state, it is becoming more apparent that a thorough recount is one way the people of North Carolina can have confidence in the results, process and system,” McCrory said.

Cooper, however, has already claimed victory.

“This is nothing but a last-ditch effort from Governor McCrory to delay and deny the results of this election,” Cooper campaign manager Trey Nix said in a statement. “Roy Cooper leads by 8,569 votes – a number that is growing daily as counties finalize election results. We are confident that a recount will do nothing to change the fact that Roy Cooper has won this election.”

The Cooper campaign said it came to its larger vote margin by citing election observers in each county who have tallied numbers not yet uploaded onto the election board site.