Kevin Powell: Fear must be turned into action

The author and social commentator is in town this week talking with parents and students at Charlotte Country Day School about the need for individual action in the face of social challenges. 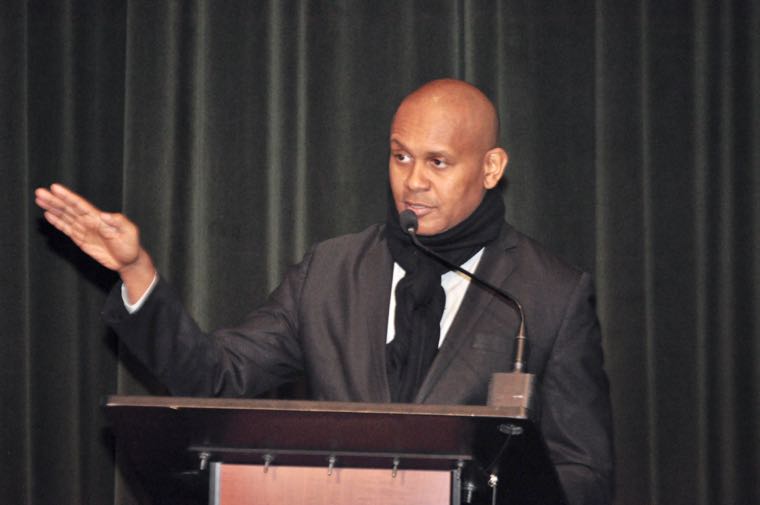 While some voters stared in stunned disbelief following the election of Donald Trump as president, Kevin Powell, an author and social commentator, said the events of Nov. 8 were far from surprising.

Powell, in Charlotte this week talking with parents and students at Charlotte Country Day School, said he has traveled the United States extensively, talking with some of those same disaffected voters who flocked to Trump’s message of blue-collar nationalism.

“The problem is, there are people out there who have not been able to connect the dots,” he said, “and so these folks are out there on their own, and the Republican Party just grabbed them up.”

Although no fan of Trump, or even the political right, Powell said the real estate billionaire spoke a populist language that working-class whites readily understood, “because the Democrats, they stopped speaking that language a long time ago.”

These days, Powell, 50, is spending a lot of his time and energy trying to convince ordinary Americans that they can achieve extraordinary results if they simply “stop waiting for Superman,” which was the theme of his stop at Charlotte Country Day.

He also wants Americans to listen more to one another, especially to those whose life experiences might be different than our own.

As much as Powell rejects the hate-filled language of the Trump campaign, he was equally critical of Hillary Clinton for calling Trump’s supporters a “basket of deplorables.”

Powell said he grew up in extreme poverty in Jersey City, N.J., the son of a single mother and with no relationship with his father. Because of his thirst for reading and backed by New Jersey’s Educational Opportunity Fund, he later studied at Rutgers University.

In 2015 he published an autobiography, “The Education of Kevin Powell: A Boy’s Journey to Manhood.”

Before he spoke at Charlotte Country Day, he sat with Qcitymetro for this Q&A.

Q. What brought you to town?

Charlotte Country Day School. It’s an honor to be here for two days to talk with parents and potential parents of this school as well as community members tonight and to be with the students tomorrow. And given all that has happened in this country this year and this week, there’s a lot to talk about — education, around leadership. I’m really looking forward to it. Not just speaking but listening as well.

…It’s my twelfth book. It’s an autobiography, and it’s the hardest thing I’ve ever written, harder than the previous eleven books put together. It took me four or five years to write it, because it’s hard to look in the mirror. You really have to…if you’re going to write a memoir, you have to be honest. I had to revisit some things I hadn’t even thought about… Writing that book forced me to revisit some very dramatic moments in my life.

Q. What was your big discovery while writing this book?

Not so much a discovery, but…. I’ll put it to you like this: When I was coming up, I read Frank McCourt’s “Angela’s Ashes,” about his life in Ireland, “The Autobiography of Malcolm X,” Maya Angelou’s autobiography, and Piri Thomas’ “Down These Mean Streets.” I knew that I had to write a book that was as honest as those books… It’s a book about me, about me as a black man, me as a man, me as someone who’s a product of post-Civil Rights America, someone who’s literally lived from Nixon and Vietnam to Obama becoming president of the United States. And so, it’s a journey, and it’s hard to try and capture that in 300 pages. Other folks will decide if it’s something that will stand the test of time. I hope it does, because I put my heart into it.

Q. What do you want people to take away from this book?

One way to be free is to be honest with yourself. Never lose sight of who you are, and if you don’t know who you are, find out who you are. How important self-love is. And how important it is not to live a life just for yourself but in service to other people.

Q. Aside from promoting the book, are you here with another message as well?

It’s not really a book tour happening, per se. The books are just wherever I speak at. For me, the message is, we live in very deep times in this country. When I went to college, it literally was the Reagan years — crack epidemic, anti-Aparthed movements happening on college campuses. And it seems like as much as we’ve gone forward in this country — I can see it in my own family history, being a first-generation college student — we keep taking steps backward. Brother, it’s about love and people being willing to have uncomfortable conversations around race, around gender, around gender identity, around class. I can’t speak for anyone else. I don’t know what folks out there feel, but I don’t believe there should be oppression or discrimination against any people, no matter who they are. I don’t care how they describe themselves. That’s the human family, but we’re not going to get there if we’re not willing to talk with and listen to each other. That’s my point.

Q. It seems all we do is talk about race, but nothing seems to change.

But have we really?

Q. So what would that conversation look like, then?

It can’t come from the folks who call themselves political leaders. It’s got to come from we the people. I’ve been a part of those conversations in different parts of the country, and they’ve been powerful experience. Ferguson, when that happened, I was brought out there by the Missouri History Museum. We had a packed room with people of all different backgrounds, and it was one of the most important conversations I ever saw around race and racism in this country. But what was missing from it was folks who call themselves leaders. Because a lot of time they try to regulate what the conversation will be.

Q. The presidential election. Where do you think that leaves us?

In dire straights. But you know, we’ve been here before. It was called Nixon, it was called Reagan, it was called both Bushes. It’s not even about Democrat or Republican. It’s about people who, in my opinion, really are not about the American people but really are about a small group of people. You see it already manifesting in the folks Mr. Trump is putting around him for his transition team. I think it leaves people vulnerable to racism, to sexism, to classism, homophobia, to transfobia, to religious hatred. But I also feel that it leaves us in a space where people feel they’ve got to organize and fight back, and we’ve got to see the commonalities between us. I think it will bring people together. I think people are just in shock. I think people are scared right now. But we were scared going into the Civil Rights Movement. We were scared going into other movements in this county. That fear has got to be turned into courage. It’s got to be turned into action.