University officials hope to have a new president in place by June 2017, when President Ronald Carter is scheduled to step down. 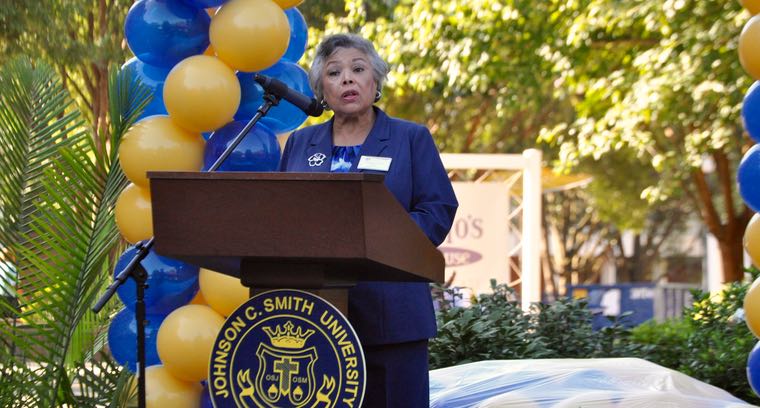 Johnson C. Smith University Board of Trustees Chair Shirley Hughes speaks on the Charlotte campus during a 2016 event commemorating 150 years since the university's founding. (Photo: Qcitymetro)

Johnson C. Smith University has named an 11-member search committee to find the school’s next president.

The committee will be responsible for overseeing a nationwide search for the school’s 14th president, who will succeed Ronald Carter, who announced in August that he would leave the university on June 30, 2017.

Committee members were named by Trustees Chair Shirley Hughes, who will also chair the search committee.

In a statement sent to local media, Hughes said the committee first charge will be to hire an executive search firm by the end of November.

Carter joined JCSU in 2008 after serving as provost and dean of faculty at Coker College in Hartsville, SC. He has not said publicly why he is stepping down from his current post.

In October 2015, Carter survived a petition drive, launched by former JCSU trustee Talmadge Fair. Fair said he believed the school was being mismanaged under Carter, but JCSU trustees appeared to line up in support of Carter and dismissed Fair from the board.

In her announcement of the search committee, Hughes said she anticipates no “big change in strategic direction” at JCSU “because we want to continue our forward trajectory.”

“The strategic direction of the university will inform the final position description and the characteristics we desire in our 14th president,” she said.

Hughes has set a goal of having a new president in place by the date Carter officially leaves.

JCSU is celebrating 150 years since its founding in 1867 as a private institution to educate black Americans freed from enslavement. The school currently attracts a more diverse group of students, many coming from coming from countries in Africa, Asia and Central America.

“I am confident that the search will generate top candidates who are interested in an attractive position with an institution that is thriving and setting the pace for the continuation of liberal arts education as an independent new urban university,” Hughes said.

In addition to Hughes, members of the search committee are:

• Dr. Philip Otienoburu, assistant professor of biology and director of the Center for Renewable Energy and Sustainability