Lewis’ stop in Charlotte came as early vote totals for African-American voters in North Carolina continue to lag behind the levels reached in 2012, when President Barack Obama was on the ballot. 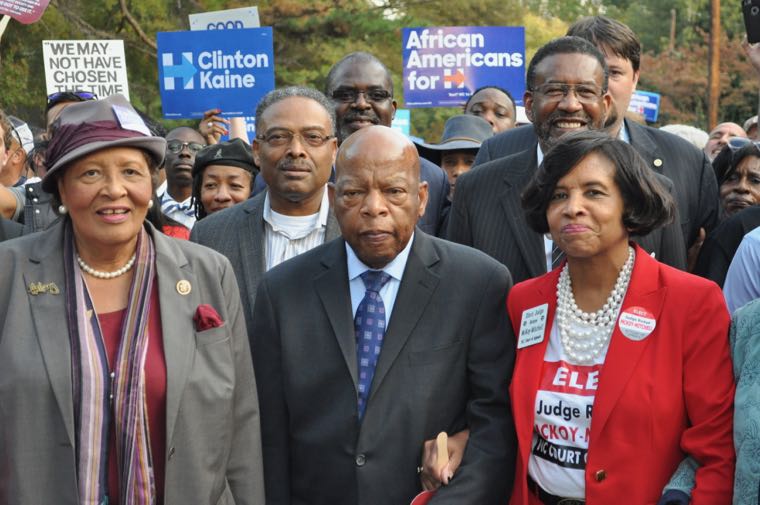 Georgia congressman John Lewis, who was nearly beaten to death while marching for voting rights 51 years ago, urged African-American voters and others in Charlotte on Thursday to go to the polls in big enough numbers to put North Carolina in Democrat Hillary Clinton’s column.

By electing Clinton instead of Trump, they can build on what’s been accomplished under President Barack Obama and other leaders before him, Lewis told a crowd of about 300 at a park named for Dr. Martin Luther King Jr., his one-time mentor.

“We’ve made too much progress to go back,” said Lewis, 76. “Here in North Carolina, you can make this state (Democratic) blue. And then Georgia will catch up with you … and (in time) the South will be blue again.”

Lewis and his listeners marched nearly a mile to an early voting site on Tuckaseegee Road.

But before they started walking, Lewis gave a brief but rousing speech in which he cautioned those who might be tempted to take lightly the voting rights he fought for as a key figure of the civil rights movement in the 1960s.

Lewis’ stop in Charlotte came as early vote totals for African-American voters in North Carolina continue to lag behind the levels reached in 2012, when President Barack Obama was on the ballot. Clinton needs a large black turnout, especially in the big cities, if she hopes to win North Carolina’s 15 electoral votes. As of Thursday morning, African-American voting turnout in the state was 11 percent below this point in 2012.

Obama will make the same get-out-and-vote pitch Friday when he speaks at an early evening rally at Charlotte’s PNC Pavilion.

During his speech, Lewis harked back to the segregated South of his youth, when he and other civil rights workers were beaten and some others were killed by white racists for trying to win rights long denied African-Americans.

Lewis didn’t mention Donald Trump by name, but he appeared to compare him to “a (long-ago) governor in the South,” presumably former Gov. George Wallace of Alabama, an outspoken foe of civil rights in the 1960s.

“That person on the other side reminds me of another time,” Lewis said, in an apparent reference to Trump. “We had a governor in the South. He didn’t pull the trigger. He didn’t throw the bomb. But he created the climate for other people to do it.”

Today, Lewis said, “you have burning churches … and a candidate supported by the (Ku Klux) Klan.”

This week, “Vote Trump” was painted on a black church set ablaze in Mississippi, and the Klan’s official newspaper endorsed Trump for president. But the Trump campaign repudiated the nod from the white supremacist group.

Among those in attendance was Sherritta Bell, a teacher coach at Harding University High School. She came with her daughter, Jasmine, 12, as sort of a civics lesson.

She said her daughter also wanted to march with Lewis.

“We try to make sure that there are things that she can remember in life, especially in politics, where she can make a difference,” Bell said.

Along the way, the marchers joined together in chants and songs – including “This Little Light of Mine” – that were made famous by the civil rights movement.

When Lewis and his followers reached the Bette Rae Thomas Recreation Center – an early voting site – marcher Michelle Boller, 46, said she was planning to go inside and vote for Clinton.

“Hillary is for our people (and) for the ones who are small,” said Boller, 46, owner of a Charlotte trucking company. “She wants to help us get ahead.”

And Trump? “He’s going to push us back,” she said. “We’re not going back, we’re going forward.”