I missed you at last night’s protest march

In four nights of protesting following the police killing of Keith Lamont Scott, missing have been the faces I've grown accustomed to seeing in uptown Charlotte. 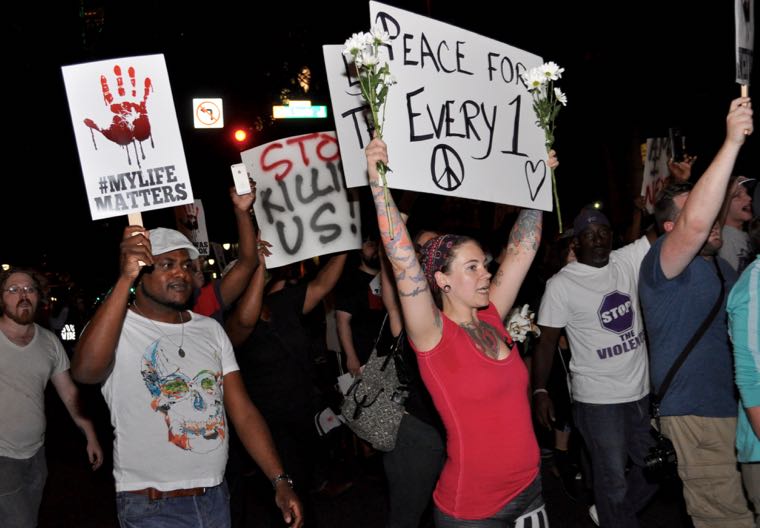 Protesters march through the streets of uptown Charlotte after Keith Lamont Scott was fatally shot by a Charlotte-Mecklenburg police officer. As a city, where do we go from here? That's the question being asked by Mecklenburg County Public Defender Toussaint Romain during a special engagement Monday night. (Photo: Qcitymetro.com)

I often hear folks grouse about how small Charlotte really is. Go to any Gantt Center social, any Happy Hour event, and you’re sure to see many of the same faces…over and over again. They read like a Who’s Who of the city’s black, professional class.

Not so this week at the protest marches.

And why is that?

In my 16-plus years as a reporter/editor in Charlotte, rarely have I seen (how do I say this?)… black folks “of a certain social class” at protest events.

Not when the school board voted one year to use the MLK holiday as a snow makeup day. Not when Jonathan Ferrell was shot and killed. And not this week following the police killing of Keith Lamont Scott.

I’m not writing this to throw shade. Honestly, I’m not. Were it not my job to attend such events, I can’t say for sure that I’d have been there either.

But it does raise some questions: As well-educated, professional black people, are we simply too busy with work and family to get involved? Do we assume others who are younger and more energetic will carry the ball? Or have we become so isolated from the day-to-day concerns of poverty and injustice that we, to some degree, now see ourselves as somewhat removed from all that mess?

Or maybe there’s some other explanation. Even during the height of the Civil Rights Movement, the fight for social justice was led by only a dedicated few. Maybe it’s human nature to expect – to hope and even to fervently pray  – that someone else will do the heavy lifting that is often required to make things right in this troubled world of ours.

So who are those folks out there marching and carrying on?

I can’t say for sure, but based on casual observation, I would divide them into three groups – the legitimate protesters, the gawkers and the knuckleheads looking for trouble.

The Protestors: Though generally young, this group is surprisingly diverse. You are just as likely to see a tattooed white woman carrying a Black Lives Matter sign as you are to see a young, black male with dreads or a dashiki. Friday night I saw an older couple who appeared to be of Indian or Southeast Asian descent. Some in this group, no doubt, are Anarchists, and probably from out of town. What binds this group is that all seem genuinely committed to justice and social change, as they define those terms.

The Gawkers: This group is kinda curious. They long to see what’s happening but appear reluctant to get too close, so they hang back…along the fringes. I read this group to be mainly Charlotte residents, probably people who live, work or play uptown.

The Knuckleheads: This may be the hardest group of all to read. CMPD Chief Kerr Putney, at his Friday morning press conference, said police got word earlier this week that a “violent group” from South Carolina was headed here. I’m not sure what that means, but it’s hard to imagine a group of hard-core thugs driving more than a few miles to break some glass or loot some hot wings. Sadly, most of the Knuckleheads I’ve observed have been young, black males – mostly, but not exclusively. They arrive late then jump on cars, damage property and get right up into the faces of riot police, cursing them and daring them to do anything about it. I get the feeling that a large slice of this group has had run-ins with the law, and are out to settle a score.

But back to my original observation – the dearth of black professionals who show up for such events in Charlotte.

I wonder what difference it would make, what pressure might be brought to bear on elected leaders, if Fraternity X or Sorority Y sent large delegations of college-educated folks bedecked in their Greek letter paraphernalia, or if the First Church of Z sent a busload of white-clad missionaries to march (in their orthopedic usher’s shoes) for the cause of peace and justice.

And what if this happened over and over again, in cities all across America?

Glenn H. Burkins is editor and publisher of Qcitymetro. Email editor@qcitymetro.com, or share your thoughts in the comments section below.