Chief Kerr Putney said repeatedly Wednesday morning that the man shot and killed by a CMPD officer in north Charlotte on Tuesday was carrying a gun when officers confronted him. 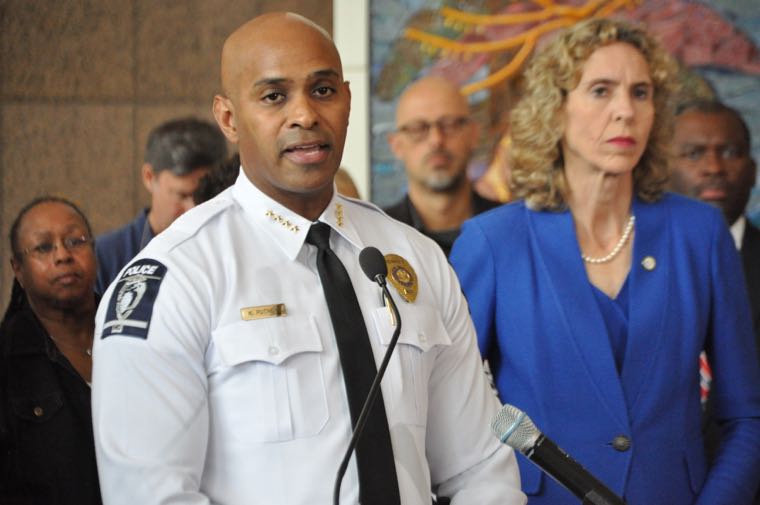 Charlotte-Mecklenburg Police Chief Kerr Putney and Charlotte Mayor Jennifer Roberts speakings with reporters at the Government Center. The press briefing was called following a night a protests and brief rioting by activists angry over the death of Keith Lamont Scott, who was shot and killed by a CMPD officer. Sept. 21, 2016. (Photo: Qcitymetro)

Chief Kerr Putney said emphatically — and repeatedly — that the man who was shot and killed by a CMPD officer on Tuesday was carrying a gun when officers confronted him in the parking lot of a north Charlotte apartment complex.

At a press briefing Wednesday morning along with Mayor Jennifer Roberts, Putney said the presence of a gun was confirmed by multiple accounts, including by eyewitnesses.

“He exited the vehicle armed with a gun,” Putney told reporters at the Charlotte-Mecklenburg Government Center, referring to Keith Lamont Scott, 43, the nation’s latest African American male to die at the hands of police.

“It’s time to change the narrative,” Putney later said, adding, “I can tell you from the facts, that the story is a little bit different as to how it’s been portrayed so far, especially through social media.”

Putney and other city and county officials had gathered to answer questions following a night in which hundreds of angry protestors – mostly African Americans — clashed with police in parts of north Charlotte. At least 16 officers were injured, and one protestor was arrested, Putney said.

Gun Or No Gun?

Whether or not Scott was armed has become a topic of debate, especially on social media, where some angry residents posted live video immediately following the shooting.

Some residents who claimed to have seen the shooting insisted that Scott was not armed when he was shot by Officer Brentley Vinson, who has since been placed on administrative leave, which is CMPD policy for officers involved in shootings. Some have suggested on social media and in local news reports that Scott may have been sitting in his truck, reading a book, while waiting for his children to get off a school bus.

Putney said Wednesday that the officers yelled several times for Scott to drop the gun. In response to a reporter’s question, he said that a matter of seconds passed between the time the officers gave those verbal commands and the time Vinson fired his service weapon, fatally wounding Scott.

Putney said that although Vinson was not in uniform, he was wearing a CMPD-issued vest with the word “police” on the front and back. At least three other officers who also encountered Scott were in full uniform, Putney said.

“The officers gave loud, clear warnings…which was also heard by many of the witnesses,” Putney said. “They were instructing the subject, once he got out of the vehicle, to drop the weapon.

“He stepped out, posing a threat to the officers,” Putney added.

Putney said a gun, but no book, was recovered by CMPD officers.

Scott was not the suspect CMPD had gone looking to arrest.

Roberts, who said she had been in touch with the White House concerning the shooting and resulting protests, appealed for calm and community patience. She said she had reached out to local clergy and local NAACP leaders to assist in deescalating tensions.

“This is a difficult situation for everyone involved…” Roberts said. “There is a lot of information that is still to be sorted out. So I’m asking our community, I am asking the people here to please wait until all information is available. In Charlotte we have a long history of working together to solve problems… thoughtfully and peacefully.”

Putney said that although Vinson was not wearing a body camera, other officer at the scene were wearing recording devices. Because of the ongoing investigation and state law, none of that video would be made public, Putney said.

“The law is pretty specific, especially around evidence for an investigation, and I cannot release it,” he said.

Putney said he had view some, but not all,  of the police video.

“The videos I have viewed, I cannot see the totality of everything that occurred,” he added.

Putney said the 16 officers injured in the overnight violence were treated and released.

CMPD will continue to investigate the disturbance, which at one point saw protesters block both lanes of Interstate 85, with an eye toward making more arrests.

“We’re following every lead we have,” he said. “Our intent is to bring anybody to justice who violated the law.”

At one point during the night, Putney said, demonstrators on I-85 broke into the back of a tractor-trailer and set its contents on fire. At other times, rocks and bottles were hurled at police, and several police cars were damaged.

In anticipation of more potential violence, Putney said CMPD would have “enhanced” staffing going into Wednesday night. And when asked by a reporter whether he would consider requesting help from the National Guard or state police, Putney said he would do what was needed to control any potential situation.