Three years after Jonathan Ferrell was shot and killed by a Charlotte-Mecklenburg police officer, his family has not given up on achieving justice for their son and brother -- justice as they now define that word. 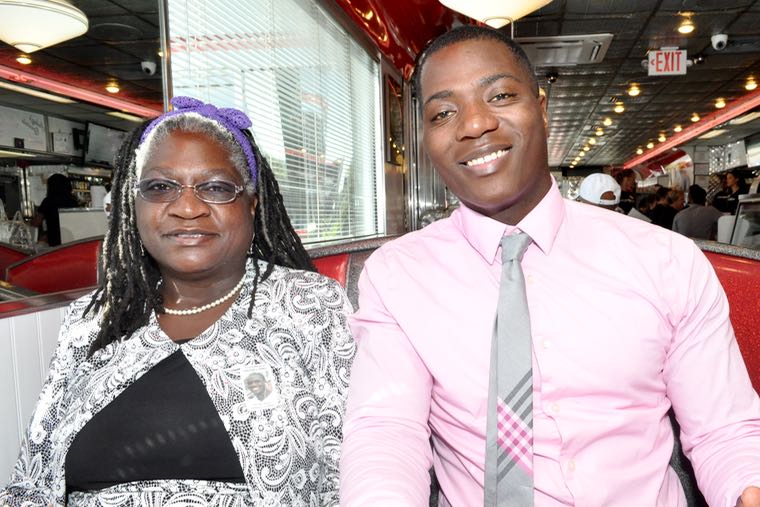 Georgia Ferrell, left, and son Willie Ferrell talks with Qcitymetro on the third anniversary of the death of Jonathan Ferrell, a 24-year-old unarmed man who was shot by a Charlotte-Mecklenburg police officer. (Photo: Qcitymetro.com)

On the third anniversary of Jonathan Ferrell’s death, his family returned to Charlotte Wednesday to attend a memorial service and to lay a wreath at the place where the 24-year-old, unarmed man was shot and killed by a Charlotte-Mecklenburg police officer.

The passage of time has made no dent in this Florida family’s grief, said Georgia Ferrell, Jonathan’s mother. What they have learned is to simply cope by keeping themselves busy — working to ensure that no other family in America is forced to suffer the pain of losing a son and brother as they have.

Jonathan Ferrell was 24 when he was shot and killed on Sept. 14, 2013 by a CMPD Officer, Randall “Wes” Kerrick. Ferrell had wrecked his car and pounded on the door of a nearby home seeking help, according to prosecutors. Kerrick, one of three officers dispatched to investigate what the homeowner though was an attempted break-in, told a jury that he shot Ferrell after the former college football player refused orders to get on the ground and ran toward him.

A voluntary manslaughter charge against the officer was dismissed after jurors deadlocked 8-4 to acquit him.

The city paid $2.25 million to settle a wrongful death lawsuit filed by the Ferrell family.

On Wednesday, Georgia Ferrell and her son, Willie Ferrell, sat with Qcitymetro to talk about the family’s grief, their efforts to honor Jonathan and their determination to seek justice – as they’ve now come to define that word.

Q. First of all, let me start by asking, how is the family?

Willie Ferrell: We’re doing well. Of course, during this time of year and just the missing of our brother — the absence of him — is always hard because life has changed unexpectedly. Even though the situation has been three years today, life has still changed unexpectedly. There has been a huge change in or lives. Our mother and our family come from a Christian base and a religious base, so we know that life must end, so we just make sure we change other lives that come into contact with our lives and impact them and try to change their lives off the situation that happened with our brother and her son.

Q. How is the family working to remember Jonathan?

WF: We have a foundation — the Jonathan A.P. Ferrell Foundation — where we give back to the city, different types of religions, all ethnic group, all different types of cultures. We do different toy drives, the foundation helps out with utilities and bills that a lot of families cannot provide for themselves. My mother, being a very strong religious person, she is helping inspire other families that have gone through losses similar to ours. She has been mentoring a lot of mothers and a lot of families to find comfort in their situations. The foundation also makes sure the cops are involved with students and the youth so that we can bridge the gap between law enforcement and the regular citizens in the community.

Georgia Ferrell: We try to be strong, but we also try to let people know that giving back makes you feel so much better. We try to do scholarships at Johnson C. Smith, and we also have a scholarship fund with FAMU, where Jonathan attended school.

Q. I’ve never lost a child, but I understand it is the most painful thing a parent can endure.

GF: Losing a child is, I tell you, there’s nothing like it. You learn to live with it, but you always have an open place in your heart, a dead cold space. But instead of letting it be cold, I try to put everything positive that Jon has done in that spot — every smile, every time he’d tell you how much he loved you, all the little things he did to help other people — ad that brings a smile to my face. Jon was one of the most caring people anyone could meet. He didn’t see color, he didn’t see gender, he just was a kind person, period. And the last words that he said to me at 4:45 that Friday afternoon was “Mama, I love you. If I don’t get to talk to you again, remember, I love you.”

Q. Has either of you found reason to be encouraged about the direction of police-community relations?

WF. Of course. My sister is a (police) lieutenant for the Leon County Sheriff Department, and her husband is an officer who works there. Our cousin is a sheriff of the county. So we have a lot of different friends and family that are involved in law enforcement. My step-father is a retired federal law enforcement office. So it is something we have always done — stay in tune with law enforcement and try to encourage the peace through the messages that we deliver. We try to push that good out of every bad situation.

GF. I have a cousin who is running for sheriff — my first cousin — and I work with him. We want to encourage the world to get out and vote. They can’t discourage me by the killings they have done and the killings that are still going on. The only thing that does for me is encourage me to fight more for change, to make sure the police forces and the sheriff’s departments are doing the right thing for our people, for our children, for the nation.

Q. Do you think the law enforcement community has recognized the need for change?

WF. Of course. Simply because it is happening so much, and the media has been doing a great job by showing us stories (of police shootings), even though a lot of people may not be happy with how the stories have been shown. But it has become a subject that has been growing across the country — from the sports icons to the regular citizens in the community. I think they have to be aware. Every time you turn on the television, there is another white male or black male or Hispanic male who is being murdered unjustly, and a lot of those guys have been unarmed.

Q. Do you have any ongoing relationship with the Charlotte-Mecklenburg Police Department?

GF. Yes. Detective Garry McFadden, we are always involved with him. He came down (to Tallahassee) and he spoke at one of the fundraisers that we had. We try to stay in contact with them.

WF. We were Skyped into a meeting that they held here with Chief Putney, probably about a month and a half ago. That’s one of the ways we try to stay in contact with them and try to continue to let them understand our pain and the movement we are doing here to impact the city and other cities around the country. Garry McFadden has been the lead communicator to help us discuss a lot of the issues our family has and a lot of different social issues we are trying to push for.

Q. A lot of people would be angry with CMPD and want nothing to do with them, but not you.

Q. What do you think Jonathan would make of all of this?

GF. Jonathan would be very happy about all of this. Anger brings about nothing but more anger. When you’re angry, you’ll do the wrong thing. It was just one person who killed Jonathan, not the whole force. So let’s try to change things, so that no other parent will have to go through what I went through.

Q. Have you heard anything from the (former) officer who killed Jonathan?

WF. You have to understand, when a case is as big as this one was, a lot of people will not do that, will not apologize, will not come to the family because, even though they may feel deep down inside that they are wrong, they do not want the public to see that they’re wrong or know that they know that they’re wrong on the inside. So we never expected that. We just expected what we expect from ourselves, which is to continue to do the right thing to bring about change, and to make sure we do on our part what’s supposed to be done right. We forgave the officer. We forgave anyone who did anything to harm the situation, and we’re making sure we move on. Jonathan would be happy right now, simply because so many people’s lives have been changed. Jonathan would be ok with being, quote-unquote, the sacrificial person to bring about change.

GF. A mother knows her child. I know this one and the three others that I have. I can tell you which one will react. Jonathan was a person who, if they (officers on the scene) had just asked a question, he would have said, “I am hurt.” But they never asked a question. For the officer, I pray for him. I pray for his son. He has a child, and just like it happened to my son, you never know what the future holds for yours.

GF. That we are still fighting for justice. Please get out and vote. Voting can change a number of things, who we put in office. Please vote, and don’t give up. Don’t give up, and continue to fight.

WF. Just as she said, we continue to seek justice, and a lot of people don’t understand what justice is. Of course we would like to see the officer get the time (in prison) that we, as a family, feel he should receive, just as any citizen would for murdering somebody. But now justice has switched from that and to making sure that this does not happen to other families. Whenever the world changes, that’s when justice will be served, not just for our family but for the world and the country. It’s not just about Jonathan. It’s more of a broad situation.