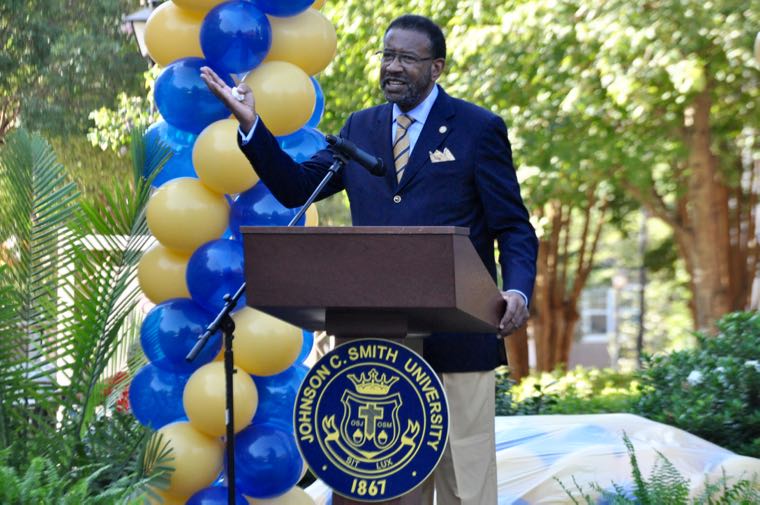 Johnson C. Smith University today kicked off what will be a yearlong celebration commemorating the school’s founding nearly 150 years ago.

The early morning party was held in a parking lot adjacent to the school’s iconic Biddle Hall and was scheduled to coincide with the start of JCSU’s 2016-2017 school year. (A new freshman class began moving in Friday.)

“We have gone through storms from the very beginning, and each time we come out higher and higher,” he told Qcitymetro. “This is exactly what we are celebrating today, and we are going to celebrate all year long.”

Carter said the sesquicentennial them will be built into various events throughout the academic year, from its Arch of Triumph Gala to graduation activities next spring.

JCSU was founded in 1867 – two years after the American Civil War ended – as The Freedmen’s College of North Carolina. Affiliated with a local Presbyterian church, its mission was to educate black preachers. (From 1867 to 1876, the school was named Biddle Memorial Institute.)

JCSU today offers 24 undergraduate degrees and one graduate degree, according to its website. And its student body, at one time exclusively African American, has grown increasingly diverse, attracting students from Asia, Africa and Latin America.

Borrowing a term he frequently uses to describe his mission as president, Carter said the notion of educating formerly enslaved residents was a form of “radical transformation” for the schools founders, one of whom had served as a Confederate colonel in the War Between the States.

Asked what the school’s founders might think of the university today, Carter said, “I don’t think they would be surprised at all, as much as they would be satisfied. I think their expectation was that we would continue to do the extraordinary. ”

After eight years of leading the university, Carter announced earlier this month that he would be stepping down next summer. The school will conduct a nationwide search for his replacement.

Shirley Hughes, recently installed as the first women to chair the school’s board of trustees, talked with Qcitymetro about her new role, the school’s 150-year anniversary and plans find a new president.

Qcity Metro: It took 150 years, but JCSU finally has a woman chairing its board of trustees.

Shirley Hughes: Yes! You know what’s interesting…when I talk about the history of JCSU, women were such a key part of donors, of giving money to the school. When we go back in history, it started with Mrs. Biddle, then it went on with Mrs. Johnson C. Smith. It’s just interesting. It’s probably a reflection of past times.

QCM: What does this celebration of 150 years mean to the university?

SH: First of all, I think it’s a joyous occasion for any institution to be able to celebrate 150 years. When we think of today’s world, stuff comes and goes so fast. I also think it reminds us of our obligation to make sure that right now we are planting seeds so that in the future – 150 years from now – people can look back and say, “Those people did what they were supposed to do.”

QCM: JCSU will be starting the next 150 years with a new president. What will be the priorities for that person?

SH: What a board looks for in a president depends upon its strategy. I happened to be on the search committee when we found Dr. Carter, and we were looking for a change agent, someone who would help transform the school rapidly. What we’ll be looking for going forward is someone who will build upon our past successes so that we continue this trajectory, so that we continue to have partnerships with (organizations) like the Bill and Melinda Gates Foundation, continuing our partnership with Duke Endowment, continuing to attract various kinds of students.

QCM: Are you looking to shift any priorities at all?

SH: No. Our board retreat is in September, and we’ll talk more specifically about exactly what we’re looking for. But I don’t see any big shifts. Instead, I would think it’s more of just being more effective and efficient with some of the things we’ve already started.

QCM: What do you think Johnson C. Smith will look like in another 150 years?

SH: I bet it will look totally different than today. It’s hard to even envision. There is a line in a poem…that talks about (how) parents can’t envision the house of tomorrow for their kids. And just as our ancestors couldn’t envision some of the jobs we have today…I’m not sure we can envision 150 years. But the important thing, I think, that we have to do is make sure that there is an institution that’s nimble, that’s able to respond to whatever those needs are. One of the things that I bet will change is: I bet there won’t be as many buildings. If you think about this whole wave for online education – people doing things at their speed and when it’s convenient – I would think that might be one of the differences.

QCM: Do you think there will still be a need for HBCUs?

SH: Yes, and I think today there is still a need for HBCU, not just for this one but in general.

QCM: But even this HBCU is becoming more diverse in its student population and faculty. If that trend continues…

Well, here’s what I would relate it to. If we think of some of the great Catholic universities in this country that maybe first started out where most of their students, if not all, were of the Catholic faith, then over time they shifted where there were students from other faiths…if you look at their core values, they are still based on the Catholic tradition. I would say that HBCUs, and this one, that if you look at our core values, those haven’t changed in 150 years, and I hope that they don’t change in the next 150 years – to provide an education for young people who, in some cases, maybe other institutions would have overlooked.