At the McColl Center for Art + Innovation, a group of Charlotte residents came together Tuesday night to talk about violence and racial enmity. 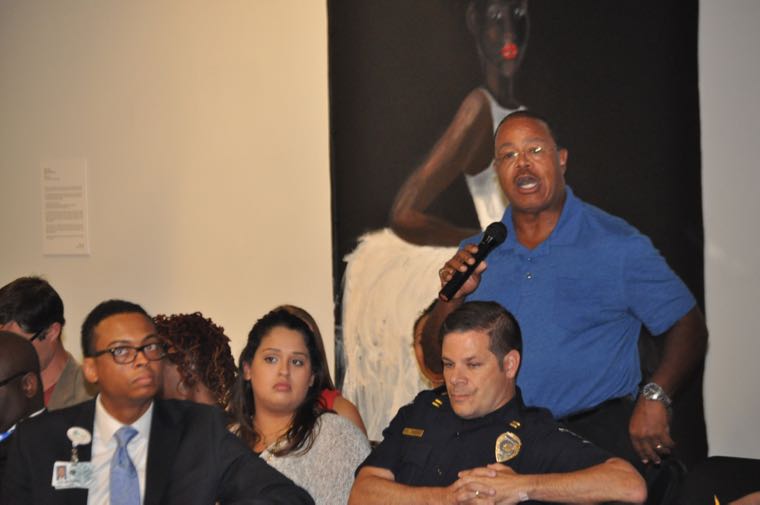 At the McColl Center for Art + Innovation, the Rev. Reggie Tuggle of First United Presbyterian Church said blacks and whites must reach out to one another more to address the nation’s racial divide. (Photo: Glenn H. Burkins)

Like most folks attending Tuesday night’s Courageous Conversations event, Captain Mike Campagna of the Charlotte-Mecklenburg Police Department was not on the schedule to speak. His boss, Chief Kerr Putney, had already filled that role for CMPD.

But after hearing a host of attendees talk of their racial pain and social frustrations – African American males who fear being targeted by cops, black moms who worry for the safety of their sons, white females who simply feel powerless and are wondering what to do – Campagna knew he had to say something, even if all the talking was done and the event was about to close down.

So for a minute or two he took the mic and told the group how much he loved being a police officer, how it was all he’d ever wanted to do — ever since the second-grade in Charlotte-Mecklenburg Schools.

He also asked for mutual understanding, acknowledging that bad cops do exist but that both sides had been fed misinformation.

“The world told me a lie,” he said. “It told me all black men are dangerous. But it also told you a lie. It told you that I want to kill you, and that’s a lie.”

The event, held at the McColl Center for Art + Innovation and hosted by Carolinas HealthCare System, is part of an ongoing effort by CHS to foster greater and more meaningful dialog across racial and cultural barriers. It’s also an effort to address various forms of violence, and the event began with a moment of silence to remember those killed in places like Orlando, Fla.; Baton Rouge, La.; Dallas, Texas; Minneapolis, Minn.; Munich, Germany; and Nice, France.

CHS President and Chief Executive Eugene Woods said many of the problems facing America spring from a “basic lack of civility and respect for one another.”

“When I think about tonight, what’s exciting is, we’re starting to have a civil conversation,” he said. “There are going to be a lot of different perspectives in this room, and we’re not all going to agree… The one thing that should bind us all together is this–the violence has got to stop.”

The Rev. Reggie Tuggle of First United Presbyterian Church challenged the audience to get to know someone of a different race and culture.

“If you want to have that kind of nonthreatening environment, come together over breakfast, over lunch and dinner and talk about whatever we talk about – the weather, the children,” he said. “And I think we will find that our values are very similar – identical – and we want the same thing for ourselves and for our futures.”

“What I’m learning is that I need to listen more,” she said. “I need to reach out more… We’ve got a lot to say to each other, but we don’t know how to do that.”

“So, with ‘Black Lives Matter’ we get the ‘All Lives Matter.’ Yeah, right,” she said. “But a lot of that, as I read in the Huff Post this morning, is that white folks are really afraid to said ‘Black Lives Matter,” because if we say it and mean it, we’ve got to own some crap… And that’s hard. It’s hard, and it’s going to get a little worse before it gets better, I think.”