Johnson C. Smith University President Ronald Carter will resign at the end of the 2017 academic year, the school announced Monday. 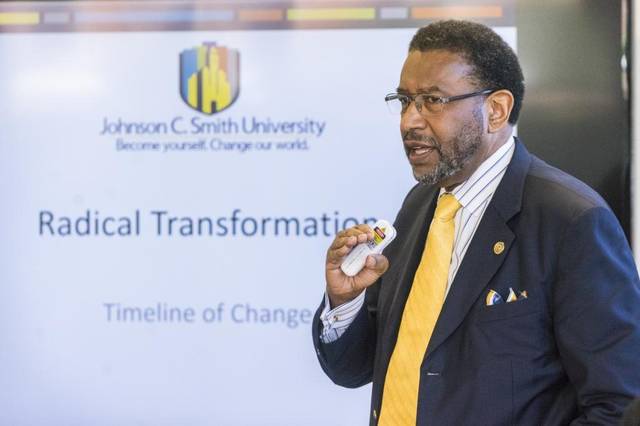 Johnson C. Smith University President Ronald Carter will resign at the end of the 2017 academic year, the school announced Monday.

Although Carter had faced isolated criticism for his management of the university, JCSU officials did not indicate what led to Carter’s planned resignation. The university also did not announce what he would be doing next.

In announcing Carter’s planned departure, JCSU Board Chair Shirley J. Hughes, who was recently tapped to replace former Trustees Chair Monroe Miller, said the board hired Carter in 2008 to guide the university through a five- to 10-year period of reinvention. She said he had done that successfully.

But in October 2015, former JCSU trustee Talmadge Fair launched a failed petition drive to remove Carter as president. Fair, a 1961 JCSU graduate and head of the Urban League of Greater Miami, said he was most concerned about the school’s financial situation, low morale among staff, and the departure of key administrators.

“My experience, as a Trustee, has provided me with enough evidence and concern to conclude that if JCSU is going to be viable and competitive beyond 2017 some bold and significant changes have to be made starting with the current leadership,” he said said at the time.

Carter survived Fair’s efforts to have him removed and in February 2015 met with local media to declare the university “financial sound.

The university said it would launch a nationwide search for Carter’s replacement.

The school’s full announcement is printed below:

Johnson C. Smith University President Ronald L. Carter today announced his plans to leave the university at the close of the 2016-17 academic year, after more than eight years of leading the institution through transformation and enhancing its visibility and partnerships nationally and in the Charlotte community. Dr. Carter will remain at the university through June 2017, as JCSU celebrates its 150th anniversary and the Board of Trustees conducts a national search for his successor.

Under his leadership, Johnson C. Smith has become one of the nation’s premier independent new urban universities, with more diverse students, new academic programs, financial growth and a more visible role in the community.

“I am deeply appreciative of the Board’s accolades. Together, the Board and I have been engaged in a creative, inspiring and enjoyable process of moving this historic University forward, simply because it deserves always to be better,” Dr. Carter said. “Now, we are proud to complete the strategic process of transforming the University into its rich and fertile opportunities as an independent new urban university.  Those who know me appreciate that I have never been content to rest on the University’s undeniable progress or on my laurels.  If anything, they are signs – still, small calls – for me to move into my next service.”

JCSU Board Chair Shirley J. Hughes praised Dr. Carter’s achievements and devotion, and said the Board hired Carter in 2008 to guide the university through a five- to 10-year period of reinvention.

“We are grateful for the visionary leadership and collaboration Dr. Carter has provided to Johnson C. Smith University through extraordinary times and for his willingness to see us through our search for his successor,” said Hughes, who served on the selection committee that chose Dr. Carter. “We hired him to serve as a change agent to forge a radical transformation and prepare us for the new realities all colleges are facing – and he has not only succeeded but actually exceeded our goals.”

A prominent figure in business and academic circles, Dr. Carter is leading JCSU’s ambitious $150 million fundraising campaign and has initiated or enhanced partnerships with The Duke Endowment, the Bill & Melinda Gates Foundation and community leaders across Charlotte and beyond. Dr. Carter presided over growth of the university’s endowment, from $47 million to now more than $64 million, and through good stewardship helped JCSU weather the recession, the tightening of federal student aid, and unprecedented economic and demographic changes that are creating new challenges for all colleges, particularly Historically Black Colleges and Universities such as Johnson C. Smith.

Academically, Dr. Carter collaborated with faculty to better align the curriculum with market demands and launch online courses, evening classes for adults, and a Master of Social Work Program, which is the university’s first graduate degree program. He also oversaw the construction of a $26 million state-of-the-art Science Center, the renovation of historic Duke Hall and JCSU’s participation in Mosaic Village, a $25 million mixed-use facility funded by public-private partnerships, that heralds a new connection between college and community.

“Dr. Carter was the perfect person to lead us through a period of radical transformation that the Board felt was crucial and outlined nearly a decade ago,” said Monroe Miller, a former IBM executive and the Board of Trustees’ immediate past chairman, whose involvement with JCSU spans four presidential administrations. “Under Dr. Carter’s leadership, JCSU has put exciting and ambitious changes in place that will ensure a positive legacy as the university builds on these initiatives to ensure that JCSU thrives for another 150 years.”