In the sanctuary of Antioch Road to Glory International Ministries on North Davidson Street, about 100 church members gathered Sunday afternoon for a Donald Trump rally. 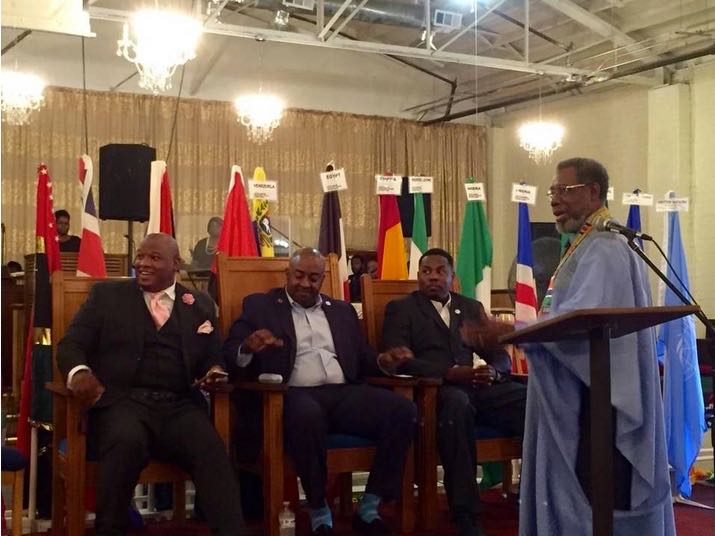 Sunday afternoon at Antioch Road to Glory International Ministries, Earl Phillip stood at the podium and told a story from his time in the Army to illustrate why he supports Donald Trump.

Phillip was chosen as the leader of his squad of 12 infantrymen, and the other men in the competitive group were jealous. But they still trusted him with their lives.

“They didn’t like it, but they still followed me,” he said. “They wanted to be with the right person in the right place at the right time. At that time, it was yours truly.”

“There are folks out there that don’t agree, and I get it,” Phillip said of his support for Trump. “But whether we support him or not, he is our leader.”

Phillip, a lifelong Republican from a Caribbean immigrant family, is the North Carolina state manager for the Trump campaign. In the sanctuary on North Davidson Street, about 100 church members listened to him speak at Sunday’s rally, where pastor Thomas Rodgers endorsed Trump for president.

Trump’s name being met with raucous applause, cheers and cries of “Amen!” in an African-American church might seem a strange scene to some. But Trump’s controversial remarks about women and minorities don’t dissuade these church members, who see him as the candidate who will promote economic opportunity and moral revival.

“He’s not against black people,” Witherspoon said. “He inspired me to go after what I can. Obama, he’s good, but it’s time for somebody new.”

Another speaker, pastor Mark Burns from the Harvest Praise and Worship Center in Easley, S.C., stressed the importance of hard work and unity in the black community. (Burns led the opening and closing prayers at the Republican National Convention and has since been accuses of falsely claiming membership in Kappa Alpha Psi fraternity.)

“The fact is, we do more damage to ourselves than anyone else can do to us,” Burns said. “I can rise by myself. I don’t need anybody else.”

Church member Trina Johnson attended the rally but isn’t sure who she’ll vote for. She said she likes Trump’s message of making America safe again, something she said Obama promised but that she hasn’t seen happen. But Trump doesn’t have a clear policy proposal for safety, she said. Education is also a concern for Johnson, the mother of a 6-year-old son, and she doesn’t know where Trump’s stance is there, either.

Phillip said he’s seen Trump’s kindness firsthand. Trump will walk into a restaurant and talk to the people working there, he said.

Phillip said other African-Americans should be open to Trump’s message of opportunity.

“You might not like the way he delivers his message, but have you listened to the message?” Phillip said.