Brooklyn Village: What’s in it for Black Charlotte?

On Wednesday, county commissioners choose a team headed by an African American to develop the 17-acre site in uptown Charlotte. 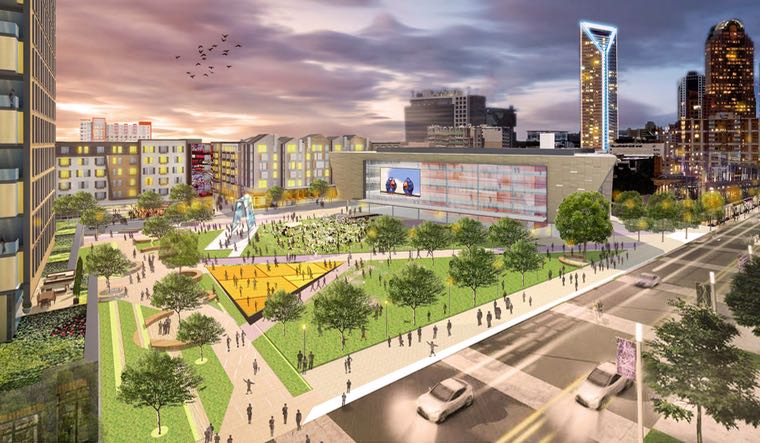 The massive, mixed-use development will rest on land once occupied by Brooklyn, one of Charlotte’s oldest black neighborhoods. The homes, churches and black-owned businesses that once made up the Brooklyn community were all razed in the 1960s during the nationwide push for “urban renewal.”

So given the land’s racial history, here are some things I think you should know as plans for Brooklyn Village move forward:

It will be grand in scope

BK Partners said it will spend $683.3 million to develop the project, which will include offices, retail space, apartments, open space and 280 hotel rooms.

The project, delivered in three phases, will be split into two parts:

Brooklyn Village South will be built south of Stonewall Street, across from the Mecklenburg Aquatic Center. It will have more than 500,000 square feet of office space, retail, apartments and a 150-room hotel.

Brooklyn Village North will be built between Martin Luther King Jr. Boulevard and Third Street, mostly on the site of Marshall Park. It will be a mix of apartments, retail, offices and a 130-room hotel. There also will be open space.

It will have women and minority participation goals

BK Partners, incorporated in Washington, D.C., is a consortium of independent developers who came together to bid on this project. The managing general partner will be The Peebles Corp., headed by Don Peebles, who is said to manage the nation’s largest minority-owned real estate development firm.

Under the BK Partners proposal, the group has set a “stated goal” of having 35 percent of the total work done by firms owed by women and minorities. BK Partners also would develop entrepreneurship and workforce training programs for minority youth.

It will seek to honor the area’s historic past There is strong sentiment among some county commissioners that Brooklyn Village should pay homage (as best it can in 21st Century Charlotte) to its historic past.

BK Partners estimates that 2,690 jobs will be created during construction, with an estimated 2,719 jobs – many in retail and hotel management – being created as the project opens in phases, starting in 2021.

The proposal calls for at least 107 units of affordable housing spread throughout market-rate properties. As for retail, Brooklyn Village would also include space for local businesses and entrepreneurs as well as for national brands. Some commissioners have said they’d like to see a strong representation of black business owners. Let’s hope that comes to fruition.

Say goodbye to Marshall Park (at least as we know it)

Proponents who advocate for more open space point to larger parks – Romare Bearden Park and First Ward Park – in other parts of uptown Charlotte and ask why so little open space is being set aside for Brooklyn Village. At Wednesday’s meeting, county staff said it was all about the mighty dollar. To make the project attractive to developers (and for the county to get top price for the property), it will be necessary to sacrifice open space for income-generating development. (BTW: BK Partners will pay the county $50.18 million for the land.)

Under the current plan, the open space in Brooklyn Village might include a proposed memorial, monuments, cultural center and public art.

The disappearance of Marshall Park would be a symbolic loss for Black Charlotte. More than any other location, it is the place where community leaders and activists gather for rallies, vigils and calls for social and economic justice.

Don’t expect any dirt to be overturned tomorrow. Peebles told reporters Wednesday that his group would spend the next six months to a year listening to the opinions of residents and stakeholders. County commissioners will no doubt be getting an earful as well.

What this means is that, based on what developers and elected officials hear, some aspects of the plan might change. But change could have financial consequences, the county staffers warned. If, for example, more affordable housing or open space is added, the financial calculus for the entire project would change – and the county could end up getting considerably less for the land than the proposed $50.18 million.

Contracts will be signed after all the listening and deal-making are done.

As for me, I believe the project has tremendous economic and cultural potential, but I also note some potential pitfalls. But more on that at a later time.

The Charlotte Observer contributed to this report.