President Barack Obama denounced Donald Trump for his proposed ban on Muslim immigrants on Tuesday, joining Hillary Clinton in portraying the Republican presidential candidate as unfit for the White House. 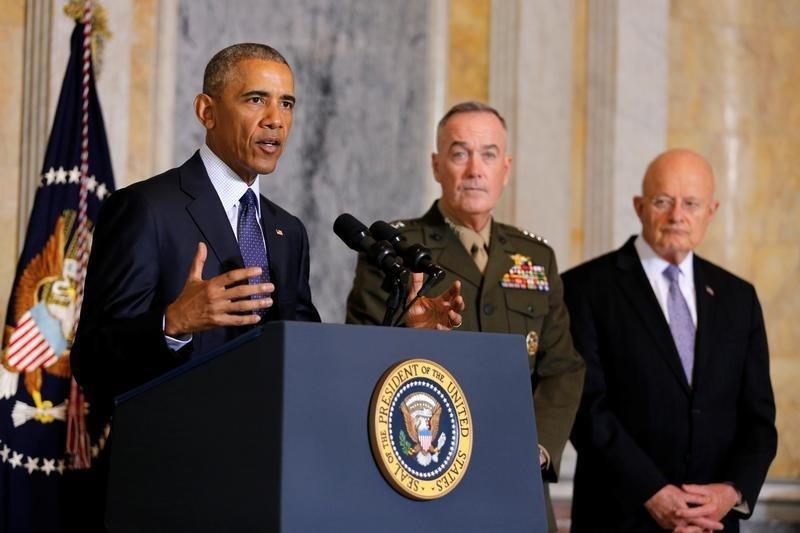 Clearly annoyed, Obama responded to Trump’s proposed suspension of immigration from countries with a “history of terrorism” after Sunday’s killing of 49 people in an Orlando, Florida, nightclub.

Obama and Clinton, the Democrat he has endorsed to succeed him in a Nov. 8 election, made nearly simultaneous speeches. The gunman was U.S.-born Omar Mateen, 29, whose parents immigrated from Afghanistan.

“What exactly would using this label accomplish, what exactly would it change?” Obama replied. “Someone seriously thinks we don’t know who we’re fighting? … There’s no magic to the phrase ‘radical Islam.’ It’s a political talking point. It is not a strategy.”

“Calling a threat by a different name does not make it go away. This is a political distraction,” said Obama, criticizing the “yapping” and “loose talk” he said he hears from Republicans.

Obama, who canceled a joint campaign appearance with Clinton planned on Wednesday in Wisconsin due to the events in Orlando, appeared to be enjoying his role in the campaign to select his successor. He tangled with Trump in 2011, producing his birth certificate to refute Trump’s claim that the president was not born in the United States.

“We now have proposals from the presumptive Republican nominee for president of the United States to bar all Muslims from immigrating to America. We hear language that singles out immigrants and suggests entire religious communities are complicit in violence,” Obama said. “Where does this stop?”

On Tuesday, Trump was unrelenting in his criticism of Obama, saying in a statement that Obama “claims to know our enemy, and yet he continues to prioritize our enemy over our allies, and for that matter, the American people.”

“When I am president, it will always be America first,” said Trump. Aides said Trump, who on Monday said Obama should resign for failing to handle the threat properly, would have more to say at a rally later in Greensboro, North Carolina.

The crossfire overshadowed the last Democratic presidential primary on Tuesday in Washington, D.C. Clinton was to meet rival Bernie Sanders late in the day with Sanders apparently inching toward ending his candidacy.

Clinton, Obama’s former secretary of state, addressed supporters in Pittsburgh. The candidate said Trump’s proposal bolstered her case that he was temperamentally unfit to serve as president, saying the commander in chief “is a job that demands a calm, collected and dignified response” to events like the Orlando massacre.

Clinton said Trump seemed to suggest on Monday in a television interview that Obama might have somehow been responsible for the deadliest mass shooting in modern U.S. history, a point that Trump said he did not make.

“I have to ask: Will responsible Republican leaders stand up to their presumptive nominee or will they stand by his accusation about our president?” she said.

The biting criticism was likely to increase the discomfort among many establishment Republican leaders about Trump with little more than a month until party figures gather in Cleveland July 18-21 to formally nominate him.

House Speaker Paul Ryan, the top U.S. elected Republican who was his party’s 2012 vice presidential nominee, on Tuesday distanced himself from the proposed Muslim ban in a further sign of establishment unease with Trump’s agenda.

“I do not think a Muslim ban is in our country’s interests,” said Ryan, who last year criticized Trump’s original proposal for a temporary ban on Muslims entering the United States.

Ryan and like-minded leading Republicans have struggled to reconcile their desire to unify the party before a tough fight against Clinton while at the same time separating themselves from some of the positions and rhetoric of Trump, who defeated 16 rivals to win the presidential nomination battle.

U.S. Senator Bob Corker of Tennessee, who sources say is among the Republicans that Trump is considering for his vice presidential nominee, said he was “discouraged” by the way the Trump campaign was going.

“It wasn’t the type of speech one would expect,” Corker said of Trump’s Monday speech in New Hampshire.

Trump has been resolute in demanding tighter immigration policies, and the Orlando attack has prompted him to intensify his rhetoric as he tries to win more support from Americans with deep security fears.

Trump noted that Mateen’s parents were born in Afghanistan. Pointing to specific incidents such as the Sept. 11, 2001, attacks, he said threats were posed by people with roots in Pakistan, Saudi Arabia and Somalia.

Trump on Tuesday met at Trump Tower in New York with a host of Republican governors, including Oklahoma’s Mary Fallin, who a source close to the campaign said was also on Trump’s short list to be his vice presidential running mate.

A Republican official said others in the meeting included the governors of Mississippi, Arizona, Arkansas, Nebraska and Tennessee, as well as New Jersey’s Chris Christie, a close Trump adviser and former presidential rival.

Trump was celebrating his 70th birthday on Tuesday. Clinton is 68.