Hillary Clinton celebrated her triumph as the first woman to lead a major party in a race for the White House, scoring big wins in California and New Jersey to cement her grip on the 2016 Democratic Party presidential nomination. 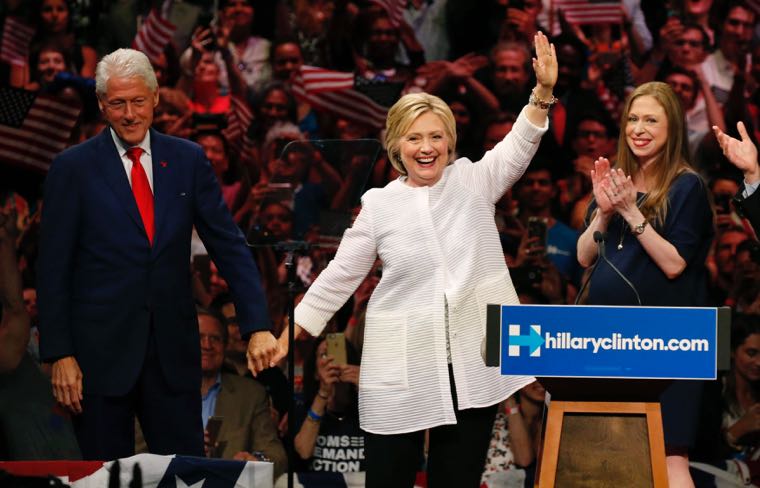 Hillary Clinton waves as she stands onstage with her husband and her daughter after speaking during her California primary night rally held in Brooklyn. REUTERS/Lucas Jackson

SANTA MONICA, Calif. (Reuters) – Hillary Clinton celebrated her triumph as the first woman to lead a major party in a race for the White House, scoring big wins in California and New Jersey to cement her grip on the 2016 Democratic Party presidential nomination.

The former first lady, U.S. senator and secretary of state spoke to supporters at a raucous event in Brooklyn, New York, and placed her achievement in the context of the long history of the women’s rights movement.

“Thanks to you, we have reached a milestone,” Clinton said in a speech. “We all owe so much to who came before.”

Clinton, 68, appealed to supporters of party rival Bernie Sanders, 74, to join her campaign. She said Democrats had been bolstered by his campaign for eradicating income inequality, which has commanded huge crowds and galvanized younger voters. Not yet ready to concede, Sanders vowed to fight on.

Clinton also harshly attacked Donald Trump, 69, her presumptive Republican rival in the Nov. 8 presidential election, for using divisive rhetoric that belittled women, Muslims and immigrants. She took specific aim at his condemnation of an Indiana-born judge of Mexican heritage.

“The stakes in this election are high and the choice is clear. Donald Trump is temperamentally unfit to be president and commander-in-chief,” Clinton said.

“When Donald Trump says a distinguished judge born in Indiana can’t do his job because of his Mexican heritage, or he mocks a reporter with disabilities, or calls women pigs, it goes against everything we stand for,” she said.

Clinton edged Sanders out in a rough-and-tumble battle that stretched over four months and 50 states. She won support, especially among older voters, with a more pragmatic campaign focused on building on the policies of her fellow Democrat, President Barack Obama.

Obama called both Clinton and Sanders on Tuesday. The White House said he congratulated her on securing the delegates necessary to clinch the nomination and would meet Sanders on Thursday at Sanders’ request.

CNN and NBC projected Clinton would win in California. With about two-thirds of the votes counted, Clinton led Sanders 56 percent to 43 percent, avoiding what would have been an embarrassing loss in America’s most populous state. The California win came on the heels of a decisive win in New Jersey and narrower victories in New Mexico and South Dakota in Tuesday’s nominating contests. Sanders won Montana and North Dakota.

A defeat in California would have reinforced doubts about Clinton’s candidacy. Now, she can turn her attention to healing her fractured party and drawing in Sanders’ passionate supporters.

Clinton’s credentials for office have not been a serious issue, but a scandal stemming from her use of a private email account while at the State Department hangs over her head as she enters the general election campaign.

She will also be running against the current of this election season, one that has favored outsiders like Trump and Sanders. In Trump, she has an unpredictable opponent who shreds the standard campaign rule book on an almost daily basis.

For his part, Sanders seems to have few options left.

Democratic Party elites are lined up squarely behind Clinton, including most likely Obama, who may endorse his former secretary of state as early as this week. Pressure will mount on Sanders to exit graciously and throw his support to Clinton.

Eight years ago in June 2008, Clinton did exactly that when she ended her bitter primary fight with Obama. At the time, it appeared unclear whether Obama would be able to garner the support of Clinton’s most ardent backers, but that election drew the highest voter turnout in generations.

At a rally in Santa Monica on Tuesday, Sanders showed no interest in ending his upstart candidacy, telling cheering supporters he would go on campaigning through next Tuesday’s primary in the District of Columbia and carry his political mission – although not necessarily his campaign – to the party convention in Philadelphia next month.

“We are going to fight hard to win the primary in Washington, D.C.,” he said. “And then we take our fight for social, economic, racial and environmental justice to Philadelphia, Pennsylvania.”

Prominent Democrats say that unifying the party now is the highest priority, and that if Sanders maintains his challenge to Clinton through the party’s July 25-28 convention, Trump will benefit.

“We have our work cut out for us,” said Representative Alan Lowenthal, a Democrat from Long Beach, California, who was one of the few Democrats in the House of Representatives to remain neutral in the race. “My overriding fear is that we get divided, and Donald Trump could win the election.”

Even if Sanders does concede to Clinton, his supporters may not go quietly. Several told Reuters in recent days that they would have trouble supporting Clinton in a matchup against Trump, saying they either would not vote or would support a third-party candidate.

“People right now are talking if Bernie doesn’t get the nomination, they are deregistering as Democrats,” said Susan Hartley, 71, a lawyer from Northern California, who was part of the noisy throng of thousands at a Sanders rally in an aircraft hangar in Santa Monica. “People are really upset.”