Graduating seniors at West Charlotte High have received more than $4.5 million in college scholarships and this fall will head off to 36 colleges and three branches of the U.S. military. 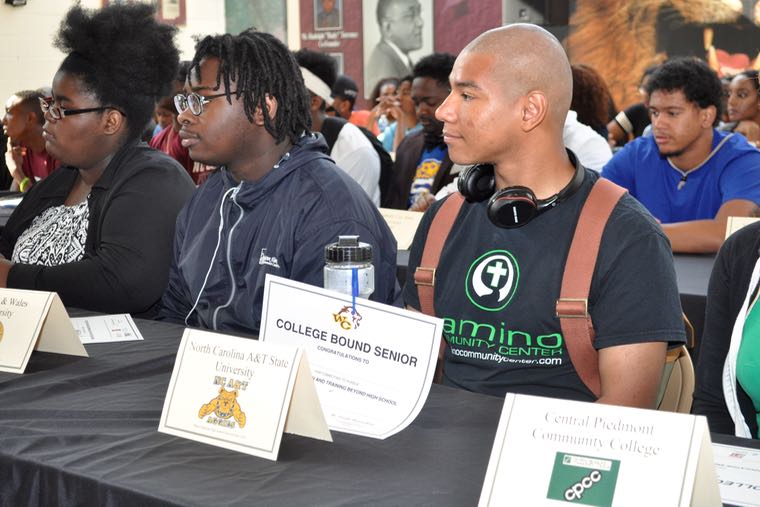 Nathene Stowe, third from left, a 2016 graduating senior at West Charlotte High School, sits with classmates at a "Decision Day" ceremony acknowledging those who will go on to college or join the U.S. military. Stowe will attend North Carolina A&T State University in the fall. Photo: Glenn H. Burkins

West Charlotte High School kicked off what administrators hope will become a tradition Thursday when nearly 100 students –about a third of the graduating class — gathered for “Decision Day,” an occasion to acknowledge and celebrate those going on to college or joining the U.S. military.

Graduating seniors at the Project LIFT school received more than $4.5 million in college scholarships, principal Timisha Barnes-Jones told the assembled crowd. About half the students stood to indicate that they were the first in their families to attend college.

Barnes-Jones said the ceremony was part of a larger pledge to “rewrite the headlines” at West Charlotte, were about 85 percent of the student body is African American and graduation rates, while improved, remain below district and state averages.

“This is a great day for West Charlotte High School,” Barnes-Jones said. “This event will become a tradition as we continue to become a culture of high expectations, academic achievement and pride.”

National Decision Day is the creation of the College Advising Corps, which is working to increase the number of low-income and first-generation high school students entering and completing college. More than 600 Decision Day events will be held this month nationwide.

At West Charlotte, the Rev. Jacotron Potts, an associate minister at The Park Church, reminded the students of the hard work and support it took to reach their graduation milestone.

“Was there ever a moment when you felt like you wanted to quit?” he asked to the students’ widespread acknowledgement. “Thank you for not giving up when you thought you had to. Thank you for rising up when there was negative media who said different things about West Charlotte. And they should be lining the walls right now, because you all represent something that’s major.”

Potts shared his own story of struggle and determination, sharing that he was born to a 17-year-old student at West Charlotte High and went on to attend college.

“If you can develop your mind, you can reach heights that you never thought you could reach,” he added. “Some of you overcame people who wrote the headline that you’d never make it, but you did.”

Where Are They Going?
Top 5 schools, in order of popularity, among 2016 West Charlotte High School graduating seniors: