Oprah Winfrey to JCSU grads: ‘Your future’s so bright, it burns my eyes’

In speech to JCSU's graduating class, the media mogul stressed the importance of persistence and individual excellence. 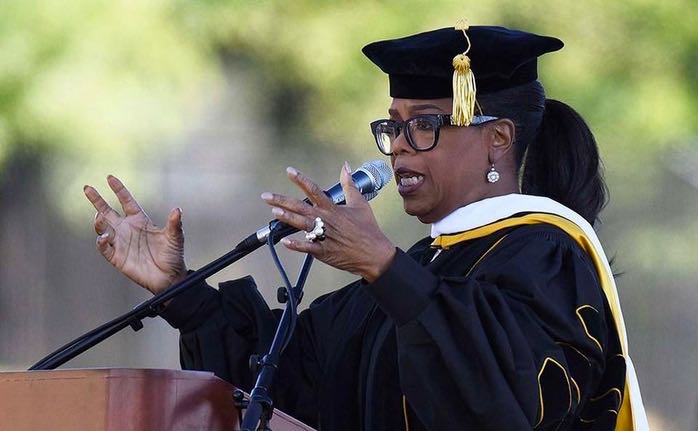 The commencement program handed to each of the roughly 5,000 people who entered the Irwin Belk Complex at Johnson C. Smith University on Sunday featured the school logo, a tasseled cap and a variety of inspirational catchphrases.

But it just as easily could have been stamped with the words: Welcome to The Oprah Winfrey Show.

Although the day belonged to the more than 300 JCSU students collecting degrees, the former talk show host attracted a bigger-than-usual crowd to the graduation and was met with thunderous applause and a sea of twitchy cellphone cameras when she stepped onto the track at the tail end of the processional.

Winfrey, 62, accepted an invitation to give Sunday’s address because the university’s Class of 2016 includes two students – Noluthando “Thando” Dlomo and Nompumelelo “Mpumi” Nobiva – who are graduates of the Oprah Winfrey Leadership Academy for Girls in South Africa.

And for the record, Winfrey (who also received an honorary doctorate of humane letters) never considered backing out.

“I got calls from members of the press asking me was I going to boycott being here today because of North Carolina and y’all’s issues,” the bespectacled media mogul told the crowd as it squinted into the morning sun. “And I said, ‘Listen, anybody that knows me knows: I don’t believe in or support any law discriminating against anybody, ever. But I will be at” – she lowered her voice and made it boom – “J.C.!” The audience didn’t miss a beat: “S.U.!” it shouted back.

As large video screens on either side of the stage displayed a shot of Nobiva weeping, Winfrey added: “Nothing would keep me from being here to celebrate the promise that I made to Nelson Mandela over 10 years ago.”

The South African program – which tries to prepare disadvantaged high school-aged girls to be future leaders – and its students seem to mean a great deal to her.

Winfrey mentioned that she had been at Mount Holyoke College in Massachusetts to support another graduate, and was headed from Charlotte to Spelman College’s commencement in Atlanta for the same reason. She calls the Leadership Academy alumnae her “daughter girls,” and Dlomo and Nobiva both referred to her Sunday as “Mom Oprah.”

More generally speaking, Winfrey came off during her speech as fans of her groundbreaking, award-winning, long-running talk show would expect: authoritative and beguiling, but also self-deprecating; prone to name-dropping and flashes of egotism, but also gracious and selfless. Smart. Funny. Natural. Over the course of 37 minutes, she didn’t appear to look at any notes.

Early on, she told an outlandish tale about her partner, Stedman Graham, who apparently realized upon arriving at Charlotte late Saturday night that he’d only packed one shoe – a bigger problem than normal because he wears size 15s.

Winfrey said he roamed The Ritz-Carlton bar in uptown asking strangers their shoe size, called a friend who couldn’t help, then as a Hail Mary reached out to Cam Newton at 12:30 a.m. The Carolina Panthers quarterback not only answered the phone, according to Winfrey, but he also loaned Graham a pair of size 14s.

“(He) managed to get his heel in Cam’s shoe,” Winfrey said as the crowd roared. “So he is standing in Cam Newton’s shoes this morning.”

On a more serious note, Winfrey wove advice and inspiration into her speech, quoting Martin Luther King Jr. (“Not everybody can be famous, but everybody can be great, because greatness is determined by service”); Maya Angelou by way of James Baldwin (“Your crown has been bought and paid for. All you must do is put it on”); and the Rev. Jesse Jackson (“Excellence is the best deterrent to racism and sexism”).

Jackson’s quote, she said, was one she wrote down and put up on her mirror when she was 16 years old.

“From that day forward, that became my mantra, and I’ve tried in everything I do to be excellent,” Winfrey said. “ ’Cause even if you flippin’ fries at McDonald’s, if you are excellent, everybody wants to be in your line. Whatever you do that is excellent, people notice you, and they talk about you, and they say, ‘Did you see that girl over there?’ ”

At the same time, Winfrey told the graduates and their guests that mistakes happen.

But “every stumble is not a fall, and every fall does not mean failure,” she said. “Prepare yourself for what you’re going to do, how you will ‘get still’ (she’d earlier defined that, essentially, as stop, listen, find clarity, seek answers from God) and know the next right move when the mistake happens. Because being human means you will make mistakes. And you will make mistakes, because failure is God’s way of moving you in another direction.”

Before returning to her seat behind the dais between university President Ronald Carter and board of trustees Chairman Monroe Miller, Winfrey told a story she has probably told a thousand times before, about how she believes fate – and faith – led to her being cast in the 1985 movie “The Color Purple.”

Then there was a catch in her voice as she appeared to choke up.

“You make me proud,” Winfrey said, smiling into the crowd, “and your future’s so bright, JCSU, it burns my eyes. Go with God.”