President Barack Obama will meet with Cuban dissidents on Tuesday and watch a baseball game with the communist country's president after delivering a speech to the Cuban people. 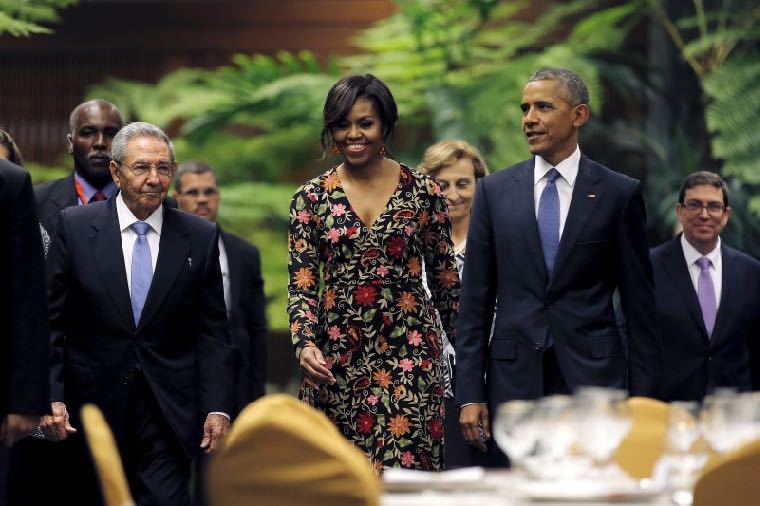 President Obama and his wife Michelle arrive to attend a state dinner hosted by Cuban President Raul Castro, as part of Obama's three-day visit to Cuba, in Havana. REUTERS/Carlos Barria

HAVANA (Reuters) – President Barack Obama will meet with Cuban dissidents on Tuesday and watch a baseball game with the communist country’s president after delivering a speech that will conclude his historic trip with a hopeful vision for future relations.

After a day spent tussling verbally with President Raul Castro over human rights, Obama will address the Cuban people in a speech from the Grand Theater of Havana that will be broadcast live by state media across the Caribbean island.

Obama, whose White House tenure ends in January, also will meet with civil society leaders at the U.S. embassy to back up his warning to Castro that a failure to improve Cuba’s human rights record would hinder momentum toward ending the decades-old U.S. embargo.

The White House has not released a list of the activist leaders Obama plans to meet.

Castro bristled at a rare news conference on Monday when asked by a U.S. journalist about detention of political opponents. He denied such practices and demanded a list of examples. The White House said it had shared many such lists with the Cuban government before.

Obama’s meeting with dissidents underscores lingering tensions between the former Cold War foes despite the rapprochement in 2014 that led to Sunday’s one-time unthinkable arrival of Air Force One on Cuban soil.

It also reflects Obama’s need to convince critics at home that his visit, the first by a U.S. president in nearly 90 years, would not be used to prop up the Castro government.

Obama often visits with civil society leaders on foreign trips, particularly in countries such as China, where Washington has raised human rights concerns as well.

Beyond that meeting, aides said Obama planned to use his speech to offer a vision for warmer relations extending beyond his own time in office.

“He’ll pull together all of these themes he’s been discussing … to say why he believes we should be hopeful for the future.”

Obama wraps up his trip with a baseball game. He and his family, who accompanied him on the trip, will join Castro at a Major League Baseball exhibition game between the Tampa Bay Rays and the Cuban National Team.

The White House wants the event to highlight common bonds between Cubans and Americans. It will create a picture of the two leaders enjoying a favorite pastime to cap the trip.

Obama leaves for a two-day trip to Argentina after the game.