The Harriet Tubman you never knew

On March 8, playwright Karen Jones Meadows returns to Charlotte with a surprising take on the life of the antislavery activist who came to be known as "Moses." 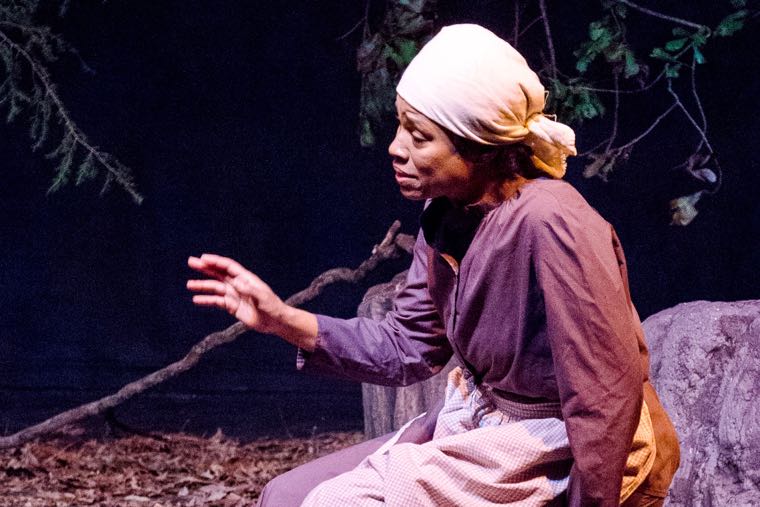 On March 8, playwright Karen Jones Meadows returns to Charlotte with a surprising take on the life of the antislavery activist who came to be known as "Moses."

More than 30 years have passed since Karen Jones Meadows left Charlotte to pursue her passion as a playwright. On Tuesday, March 8, she returns with her one-woman play based on the life of Harriet Tubman, the antislavery activist who rescued more than 70 enslaved people in the 1850s.

Meadows now lives in New Mexico, and her play, “Harriet’s Return,” is based on extensive research, she said. She also said she feels a deep, spiritual connection to Tubman, who died in 1913.

In a recent telephone chat, Meadows talked about her play, her thoughts on the afterlife, and what she hopes theatergoers will take away from her work.

“Harriet’s Return” will be staged at Booth Playhouse and is the first in a series of Harvey B. Gantt Center events sponsored by Duke Energy.

Q. Tell me about “Harriet’s Return.”

“Harriet’s Return” is a theatrical production based on the life of Harriet Tubman. It starts in the contemporary. I like history, but a lot of people don’t, so I try to put it in a context that is relevant to people, so I set it in a restaurant, where it begins. And it goes through her entire life, from her childhood to her afterlife, which we get to visit. It’s about her personal journey.

Q. What do you think people will find most surprising about the play?

One of the things I most wanted to portray is that she was married and that she had romance in her life, that she likes the idea of having a home and being free. She was free from within, and she did all the things she had to do to make it manifest in the physical world, and that’s what we all have to do, to some degree.

Q. What inspired this play?

It started at the African American Cultural Center (now the Gantt Center) back when Shirley Farrar was executive director. Shirley asked me to create a living portrait of black history that I could take into the schools. She told me I could choose anyone I wanted, so I chose Phillis Wheatley, Lorraine Hansberry, Queen NZinga and Harriet Tubman. I studied their lives and the period an anything else I thought was relevant. I was in costume, and I would portray them. Harriet became the most popular, I think, because people knew her the most. I loved it, but I was done with it. When I left Charlotte, I wasn’t gong to do Harriet anymore. But no matter what I did, Harriet Tubman would pop up. She just kept coming up (in my life). I didn’t plan to have a life of Harriet. I’m pretty darned surprised.

Q. Do you feel that you relate to her in some way, having lived with her for so long?

Oh, totally. When I first did it, I didn’t have any deep affinity for her in particular. I was appreciative, I had respect, but I wasn’t like a Harriet person. Now she comes to me and comes through me. I do intuitive and psychic work, and Harriet had that too. Everybody has it, but it got cultivated, and I cultivated mine… My characters all come to me. It’s part of being a writer, I think. When I say she’s in me, two to three weeks out before I’m doing a show, I get this overwhelming misery and sadness and depression.

Q. Do you believe that everyone who has lived is still out there in some dimension?

Yes, I believe in reincarnation. I believe people come back. Everyone is not everywhere. To me, people are in different places. I’m working on understanding whether Harriet has residual energy, because that’s what I think. I think Harriet left a lot of energy. I think people latched on to her and keep her going, too, and that we need her. She has a divine-mother energy. She’s real… We are basically divine beings experiencing a physical life.

Q. What do you want people who attend this play to come away with?

The end of the play has a call to action. What I want them to do is tap into that spirit I was just talking about and make a decision about what’s important to them and what they want to do and go ahead and do it. One of the things about “Harriet’s Return,” Harriet didn’t say, “I think I’ll go out and save some people.” She wasn’t born a hero; it just worked out that way. Like most people who make great change, she got shoved into it. She took the challenge, and we’re still talking about it now.

Q. So there’s a call to action at the end. Is that all you’re going to say?

Yeah, because I don’t want you to know what it is until you see it.