Qcity Metro Editor Glenn H. Burkins talks with the CIAA commissioner about her move to Charlotte, her involvement in the annual tournament and her unique role in college sports. 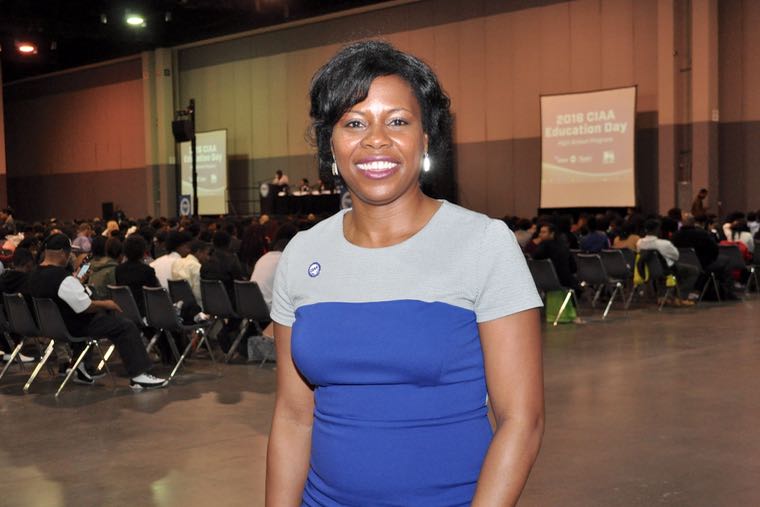 Just as the CIAA tournament was shifting into high gear Wednesday, I caught up with conference Commissioner Jacqie McWilliams at the Charlotte Convention Center, where she had just welcomed more than 5,000 high school students as part of the tournament’s annual Education Day.

McWilliams said moving the conference headquarters to Charlotte last summer was a great decision – for herself as well as for the organization.

“This city has so much richness and opportunity for growth,” she said. “I knew that coming here, but to be a part of it and seeing the spirit of Charlotte confirms why we live here, why our offices are here, and why the tournament has done well here.”

McWilliams said she like Charlotte most because of its ease of transportation, its arts community and its sports environment.

Here are some other things we talked about:

Q. You’ve been here since August. How is Charlotte treating you?

Very well. Excellent. Since we moved here, we’ve been embraced as a member of the community, and everyone from the mayor’s office to the Charlotte Hornets to the CRVA to the Chamber, Center City Partners – you name it; every organization has reached out to me in some form to say ‘What can we do to help?’ So I feel that we transitioned very well, and this feels like home.

Q. Some people say the CIAA tournament will never leave Charlotte now that the conference headquarters is here. What would you tell those people?

I’ll tell you this – we are in our second year of a six-year agreement. So after this year we have four more years. The conference office will hopefully stay here forever. We were in Virginia for a very long time, so something substantial would have to move our conference office. As for the tournament, the conference will have to reevaluate that as we get closer to 2020. That’s a review with the (CIAA) board and the city of Charlotte to see if we can stay here longer.

Q. You’ve been commissioner for more than three years (four tournaments). How has the tournament changed since you’ve been in charge?

I don’t remember what happened my first year. My second year it sorts of started coming together. My third year it felt like, ‘Man, we’re almost there.’ …I think the spirit of the tournament has changed. We’ve always had Education Day. We’ve always had Career Expo. We’ve had Fan Fest. But I think I’ve challenged my team to think beyond the status quo of what we’ve done in the past. What can we do to make it better, every single year?

…When I got here, we were in a deficit. We were fighting through financials. The conference was going through its own leadership transition. Now we’re seeing the fruits of us making some strategic decisions and taking some risks. The agreement that we have with Charlotte was a game changer for us – moving us here, giving us $1.4 million in scholarships, helping us cover the costs of our arena expenses – it gives us an opportunity to give back more to our schools. And we’re out of our deficit. That was a hard thing to do, trying to be focused on everything else when you don’t have money to operate.

Q. Are you actively involved in planning the tournament and its related events?

I have a great team. They know the vision, and they know the expectation. They run everything by me, because I want to know who’s coming in for entertainment. I want to know who’s speaking. I give my suggestions, but I really trust them. I think our team knows the expectation from our board and what I see vision wise for this tournament to grow. So I feel really blessed that everything my team has brought to me to look at, I’ve been so excited. My job is to create commissioners and create leaders, and they have to be able to think sometimes beyond me. My job is to put it out there, give them the resources and let them do it.

Q. I’ve heard you say that you are the only black, female conference commissioner in all of college sports. What does that say?

We have a lot of work to do. To me that’s unacceptable. I don’t mind being celebrated, but when I look at the number of minority women and the number of minorities in leadership positions – we’ve got work to do. Fortunately, because I am the only one, I’ve been asked to serve on a bunch of stuff. So I feel honored to be able to try and help make an impact and try to strategically work with the NCAA and other organizations to make it better.