Clyburn's endorsement comes as Clinton battles rival Bernie Sanders for the support of blacks in the South Carolina contest, 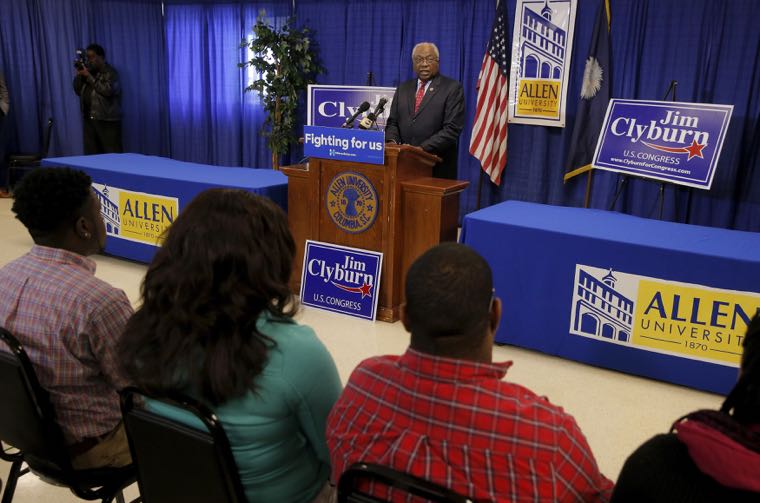 U.S. Representative James Clyburn of South Carolina has backed Hillary Clinton for the Democratic presidential nomination, giving her campaign a vital boost from the state’s most influential black politician ahead of next week’s primary.

Clyburn’s endorsement comes as Clinton battles rival Bernie Sanders for the support of blacks in the South Carolina contest on Feb. 27, when more than half of the voters are likely to be black.

On Saturday, Clinton scored her first clear win over Bernie Sanders in the Nevada caucuses, and she has strong support from African American voters heading into South Carolina next week and Super Tuesday states just beyond.

“Campaigns are and should be about the future, and I believe that the future of the Democratic Party and the United States of America will be best served with the experience and know-how of Hillary Clinton as our 45th president,” Clyburn said at a news conference in South Carolina.

Clyburn, the No. 3 ranked Democrat in the U.S. House of Representatives and the only Democrat in Congress from South Carolina, stayed neutral in the bitter 2008 race between Clinton and Barack Obama.

But he said he decided to get involved this time because Clinton was well positioned to tackle many of the challenges facing minorities and the country.

“Hillary Clinton is a fighter, and that’s what we need for our next president,” Clyburn said.

Clinton and Sanders, a U.S. senator from Vermont, have been courting support from black civil rights leaders and voters as the Democratic race has moved on from mostly white Iowa, where Clinton narrowly won, and New Hampshire, where Sanders routed Clinton.

For more on the 2016 presidential race, see the Reuters blog, “Tales from the Trail” (http://blogs.reuters.com/talesfromthetrail/).