Since it's launch four years ago, Mecklenburg County's Village HeatBEAT program has been slowly making a name for itself. 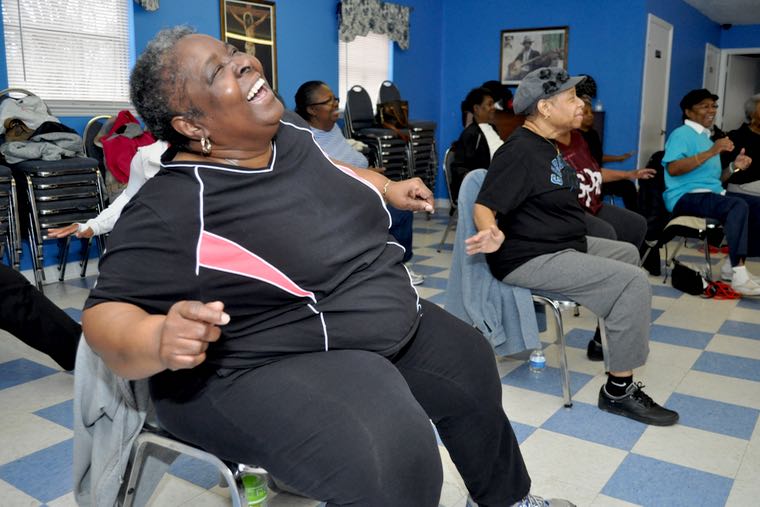 A group of seniors exercise during a weekly program sponsored by Rockwell AME Zion Church in Charlotte. Rockwell is one of more than 20 churches that participate in the county's Village HeartBEAT program. (Photo: Glenn H. Burkins for Qcitymetro)

It’s no secret that African Americans and Latinos are among the most church-going people in our nation. And it’s also no secret that both groups suffer disproportionately from health disparities. So when the Mecklenburg County Health Department came up with a plan to address black and Latino health issues through local churches, it seemed like an idea worth persuing.

Now the program that started four years ago – Village HeartBEAT — is getting some national attention.

Earlier this month, the county got a visit from Sharon Ricks, the federal Department of Health and Human Services’ acting health administrator for Region 4 – an eight-state area that includes Alabama, Florida, Kentucky, North Carolina, South Carolina, Tennessee, Mississippi, Georgia, which together have a population of 63 million people.

Ricks said she came to Charlotte because she had heard about Village HeartBEAT and wanted to see it up close.

“There are a lot of communities that just don’t have resources, that don’t know how to deal with health behavior issues or clinical care issues,” she said. “So any kind of models that we can use to help communities figure all of that out, it’s worth flying out there for.”

Ricks said she had never seen a program quite like Village HeartBEAT.

Now in its fourth year, the program tries to promote better health in black and Latino communities by working with local churches. Each year Village HeartBEAT has gotten bigger, with about 21 congregations taking part this year.

Each church sponsors a team of about 10 people who compete as a group to lose weight and to meet other fitness and health-related goals. At the end of the 16-week competition, a banquet is held and trophies are awarded to top finishers in various categories. (The entire program spans 10 months each year.)

But it’s not just about weight loss. Village HeatBEAT also works with participants on issues such as diabetes management and prevention, smoking secession and healthy eating.

Cheryl Emanuel, a Mecklenburg County senior health manager who created the Villlage HeartBEAT program, said it was an honor to be selected because competition to present at the conference is stiff.

During her stop to Charlotte, Ricks dropped in at the Camino Community Center near University City, which has taken a lead in promoting health in the Latino community. She also visited an exercise class for seniors sponsored by Rockwell AME Zion Church and met with a group of pastors whose congregations participate in Village HeartBEAT.

Ricks told me that Region 4, which is basically the Deep South, has “some of the poorest health outcomes” in the nation.

“We live sicker and shorter lives than any other region of the county,” she said. “If we don’t reach out to the communities, they don’t have anyone to help pull them out of this.”

And it’s not just about exercise and eating right, she said. It’s also about having adequate education, jobs that pay a living wage and eliminating environmental hazards.

In the midst of such a challenge, I asked Ricks what gives her hope.