A breakfast in Harlem underscores a key challenge for Bernie Sanders

African Americans will play a crucial role as the Democratic race moves to South Carolina, where more than half of the party's primary voters in 2008 were black. 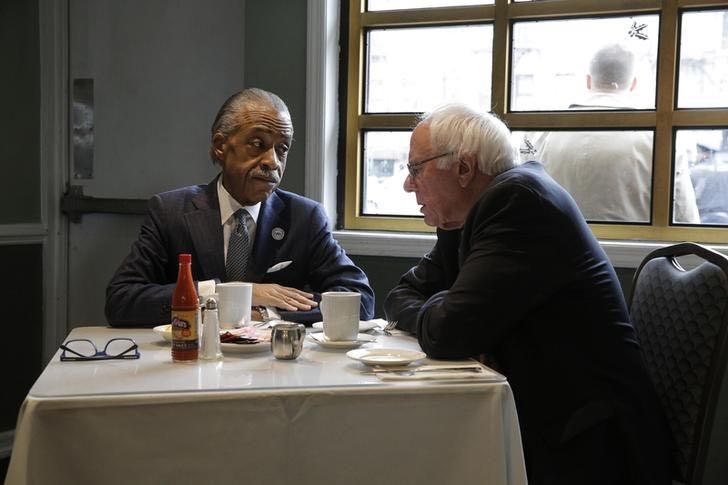 Bernie Sanders had breakfast with one of America’s most prominent civil rights activists, Al Sharpton, just hours after trouncing Hillary Clinton in the New Hampshire Democratic presidential nominating contest. The meeting marked a recognition by Sanders that his campaign must swiftly broaden its base of support if he has any chance of mounting a long-term challenge to Clinton, who consistently polls better among African American voters.

They will play a crucial role in the Democratic race as it moves to South Carolina – where more than half of the Democratic primary voters in 2008 were African American – and other states more diverse than New Hampshire or Iowa, which held the first contest of the 2016 election.

Sanders met Sharpton in the same Harlem restaurant where the activist met with Barack Obama during his 2008 presidential campaign – an obvious bit of symbolism for the Vermont senator trying to connect with minority voters.

“My concern is that in January of next year for the first time in American history a black family will be moving out of the White House. I do not want black concerns to be moved out with them,” Sharpton, a Baptist minister and television talk show host, told reporters afterwards.

Sharpton discussed a recent spate of police shootings of black males and other issues with the senator. He said he would not endorse a candidate until he met with Clinton.

Even before the exit polls showing that Sanders had won New Hampshire, Clinton’s campaign was already trying to highlight her double-digit lead over Sanders among African American and Latino voters.

“It will be very difficult, if not impossible, for a Democrat to win the nomination without strong levels of support among African American and Hispanic voters,” Clinton campaign manager Robby Mook said in a memo sent to reporters.

He predicted the Democratic race would be won in March, when it quickly expands to 22 delegate-rich states with some of the largest minority and urban populations — and that Clinton would have the advantage.

Clinton has a long history of support for civil rights, and she has benefited from her husband Bill Clinton’s popularity in the black community during his presidency, although that became strained during the fierce 2008 primary battle with Obama.

Reuters/Ipsos polling nationally showed that in January, blacks backed Clinton by a margin of 3 to 1 over Sanders. Among Hispanics, 48 percent supported Clinton and 32 percent backed Sanders.

But as black and Hispanic voters became more familiar with Sanders through televised presidential debates, they seemed to like him more, with his favorability ratings rising slightly among those groups over the last few months, the polling showed.

So far Sanders’ strong performance has been due to the mostly young white voters who have embraced his populist anti-Wall Street message and call for income equality. But in the upcoming nominating contests, Sanders needs to carry that message to a broader group of voters, particularly minority voters, who will help determine the Democratic nominee.

African Americans and Hispanics comprise 35 percent of the Democratic party, according to a 2013 Gallup poll.

Sanders already has intensified his efforts to reach black voters with more campaign stops before African-American audiences and ads on black-oriented radio stations. Rapper Killer Mike sometimes introduces Sanders at rallies, and academic Cornel West has also campaigned for him.

The senator also frequently condemns the disproportionate rate at which blacks are targeted by police and has called for increased police transparency and accountability.

Sanders’ intensified effort to appeal to minority voters follows questions about whether he has broad enough support to take the White House. Clinton herself has raised the issue of Sanders’ electability on the campaign trail and in debates.

Even some Sanders supporters have expressed fears that a vote for him could allow Republicans to win the election.

But Sanders’ campaign shrugs off any worries about the road ahead.

“We recognize we are moving to a bigger stage, but it’s another opportunity for him to spread his message. People have responded to his message when they hear it,” said Sanders campaign spokesman Michael Briggs.

Sanders already has begun airing ads in Nevada and South Carolina, has hired staff in 15 states and is prepared for a national race, Briggs said.

On Super Tuesday, Sanders will be looking to do well in several states, including his home state of Vermont, as well as Massachusetts, Colorado and Minnesota, where the grassroots enthusiasm of his supporters could be an advantage.

Still Irene Matz, a retiree in Minneapolis, Minnesota, said she was worried about Sanders’ electability and had yet to make a decision on who to vote for.

“Hillary has been hit with everything for years, we know what we are getting with her. Now Bernie will get his turn, and they won’t be kind to him,” Matz said.

“I’ll vote for Hillary unless I feel Bernie has a good shot,” she said.