Float like a butterfly: The life and legacy of Muhammad Ali – in dance 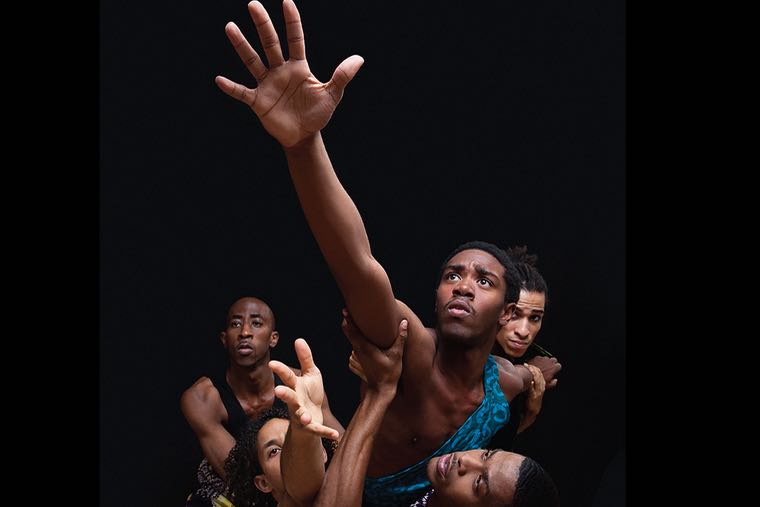 As the mother of an almost six-year-old boy of color, choreographer Christal Brown thinks a lot about what it means to be a black teenager and a black man in America.

“We live in a small town in Vermont,” Brown says. “My son knows he’s brown. He knows his racial identity is black. But he doesn’t yet know what the social implications of his blackness are.

“I have the privilege of waiting to explain that to him,” she continues. “I can reconfigure my parenting strategies so that I teach character first and survival later. Other parents of black sons may have to teach survival first.”

The Kinston, N.C., native remembers the messages society sent her when she was a young girl growing up in the South. “I was taught to be quiet. Dancing is how I got to be loud.”

Maybe that’s part of the reason Brown, now chair of the dance department at Vermont’s prestigious Middlebury College, was drawn to Muhammad Ali as inspiration for a multimedia dance performance she created. “He was this loud comedian/athlete/activist,” she says of Ali. “But he was so much more than that. I respect him in so many ways. He was an amazing father, and he was driven by God.”

Or, as Dr. Gregory Mixon, UNC Charlotte associate professor of history says, “He was his own man. He had a specific vision of himself.”

The UNC Charlotte Department of Dance is hosting Brown and a nine-member male ensemble for a one-night-only performance of “The Opulence of Integrity: A Movement Odyssey Exploring the Life and Legacy of Muhammad Ali” on Friday, Jan. 29 at 7:30 p.m.

Brown says Ali “lived up to his full potential.”

“I dedicated this piece to members of my family who ran up against societal issues and weren’t able to live their potential.”

Inspired by boxing’s most charismatic and outspoken legend, this work of dance theater is presented in four chapters. Each movement is introduced by a chorus of narrators who use Ali quotes – and even actual audio recordings – to set each scene. The piece incorporates spoken text, imagery and elements of boxing, hip hop, martial arts and modern dance.

“The Opulence of Integrity” uses Ali’s life story to explore the larger issue of the struggle for identity among men of color in the United States. It began as a collaboration between Brown and the late jazz musician Fred Ho. They premiered the work at the Guggenheim in 2011, but Brown later tweaked it to include an original sound score by Zimbabwean composer Farai Malianga, Ali’s actual words (“Superman don’t need no seatbelts,” for example) and a projection element as a backdrop.

The lyrical name of the program comes from Ali’s large life (that’s the opulence) and how true he remained to himself even as he became a living legend (that’s the integrity).

There was pressure on Ali, Dr. Mixon says, from inside the boxing community – and outside it, too – to “adhere to stereotypes of what black people should be.” And he refused to conform.

“There are societal perceptions of men of color,” Brown says. “Ali never fell victim to any of them. And he didn’t allow himself to fall victim to any thoughts of self-mediocrity. When you’re told by society that you’re one thing, it’s hard to find your own voice.”

Ali found his. And used it.

Before she started her research, Brown didn’t know much about Ali, except that her dad enjoyed watching him fight. But as she began to dig, she discovered they had more in common than she imagined.

For instance, Ali began boxing almost by accident, she says. When he was about 12, someone stole his bike, and he went to the police and told them he’d beat up the culprit if he found him. The police officer asked, “Do you even know how to fight?” The officer also happened to be a boxing coach, and he began to train the young Cassius Clay.

Brown got into dance by happenstance, too, when a carpool mix-up led her to a dance studio instead of piano lessons.

Although it’s clear Brown is a fan, she doesn’t see Ali only in heroic terms. He was fully human, and “The Opulence of Integrity” explores that. The pugilist was a conscientious objector to Vietnam, and paid a price for it: He was immediately stripped of his heavyweight title.

He was married four times and had seven daughters, two sons and many mistresses. And Brown says that although Ali had trouble being faithful to his wives, he remained – in many ways – a hero to them. She tells the story of one of his wives crying at the sight of him. One of her children asked why she was crying, and she said, “I looked into his eyes and saw God again.”

“He didn’t have just frivolous relationships with his wives,” Brown said. “There was something in them that changed profoundly because of him. And he changed because of them, too.”

And while there were people who thought Ali God-like – and he himself promoted the idea – Brown says he humbled himself before God. “He said God was No. 1.”

Ali wore his Islamic faith proudly after he converted. Dr. Mixon says there were three men of faith in the 1960s and ‘70s who taught the African-American community to carve out their own destiny without being beholden to stereotypes: Dr. Martin Luther King Jr.; Malcolm X and Ali.

Before Brown worked with an all-male ensemble, she was principal dancer for Urban Bush Women, an all-female troupe. Starting to work again with men led her to realize she’d “traded athleticism for the specificity and fluidity that only women can bring to dance.” She’s again enjoying the athletic component of dance with the Ali performances.

There’s something very special for Brown about the Jan. 29 performance of “The Opulence of Integrity.” It will be the first time she’s seen her show as a member of the audience. There is just one role – a cameo – for a woman, and Brown generally plays it. In Charlotte, it will be played by a UNC Charlotte student.

Although Ali was full of bravado and bombast, referred to himself as “The Greatest” and was the master of the most masculine of sports, women are central to his story. There needed to be a female presence in the narrative, if only for a brief time.

“Ali may have been Superman,” Brown said. “But he had his own version of kryptonite – women.”

This story was produced as part of the Charlotte Arts Journalism Alliance.

The Jan. 29 performance is at 7:30 p.m. in the Anne R. Belk Theater at Robinson Hall for the Performing Arts on the UNC Charlotte campus. Tickets for the performance are $25 for general audiences, $10 for seniors and $8 for all students. Purchase online at arts.uncc.edu or by phone at 704-687-1849.

A free pre-concert talk with Dr. Gregory Mixon, associate professor of African-American history will precede the performance. The talk is at 6:30 p.m. in Robinson 118.