The company comes to Charlotte for the first time on Jan. 22. On that same day, a retrospective of the company’s four-decade history opens at the Harvey B. Gantt Center for African-American Art + Culture. 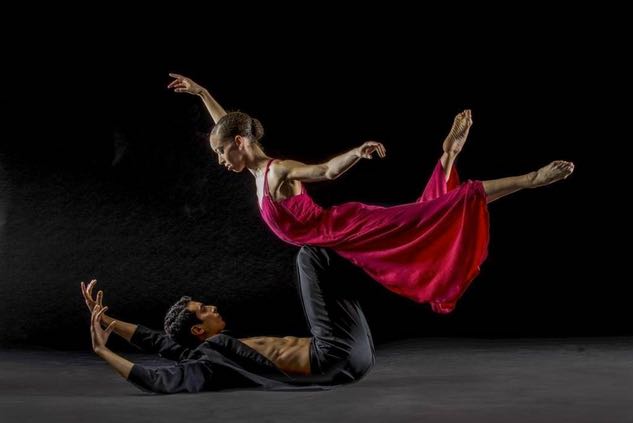 When Misty Copeland was named a principal dancer for American Ballet Theatre – one of this country’s two most famous ballet companies – it was big news: She was the first African-American woman to get the job.

The announcement six months ago was just part of her 2015 run; Copeland also got a Time cover, inclusion in that magazine’s 100 most influential people in the world, a “60 Minutes” profile, a documentary film, and word that the powerful, against-all-odds ad she’d made for a sportswear company had been viewed more than 8 million times. Diversity and ballet’s top tier – “principals” outrank “soloists” – drew more and more discussion.

But this came half a century after Arthur Mitchell.

Mitchell was the first black dancer ever to join one of the two big companies, coming to New York City Ballet in 1955 and becoming its first black principal dancer in 1962. (For local reference, Charlotte Ballet’s Patricia McBride had been named NYCB’s youngest principal in 1961; Jean-Pierre Bonnefoux was still with Paris Opera Ballet.)

The company comes to Charlotte for the first time on Jan. 22. On that same day, a retrospective of the company’s four-decade history opens at the Harvey B. Gantt Center for African-American Art + Culture.

The collaboration and the timing – the week of Martin Luther King Jr. Day – weren’t planned. They just came together, gracefully.

A reply to tragedy

King is central to Dance Theatre of Harlem’s creation story.

“It was Dr. King’s assassination that inspired Arthur Mitchell to found Dance Theatre of Harlem,” said David Taylor, president and CEO of the Gantt Center.

“His reaction to that event,” said Blumenthal Performing Arts Center president Tom Gabbard, “was: ‘I need to do something profound.’ ”

King had called for nonviolence. So Mitchell fought oppression and evil in the most peaceful and productive of ways: He taught the children of Harlem there was a way out.

Mitchell’s name might not be the household variety, like some black pioneers in sport, but he named his company after his neighborhood – not himself. The much-decorated icon, now 81, has been a MacArthur “genius grant” recipient and a 1993 Kennedy Center honoree.

It hasn’t always been an easy road for the company, though. In 2004, with a debt of about $2.3 million, DTH shut down its 44-member professional troupe. It started up again in 2013, after a hiatus a lot longer than the year it had predicted, with a new artistic director – former DTH dancer and founding company member Virginia Johnson – and now maintains a company of 18.

Gabbard said he didn’t want to invite DTH to Charlotte before the company was on solid artistic footing, before it “was back fully.”

Many dancers, many hues

Gabbard said it’s at the top of its game now. And although DTH has changed since emerging from what Gabbard called its “near-death experience,” Johnson said the company’s mission remains the same: Connect people through art.

And with color. In a 2014 interview of Misty Copeland and Johnson, for national dance center Jacob’s Pillow, Copeland said society tends to see ballerinas as white. Johnson added: “We expect pink tights and ballet shoes.”

But she recalled Arthur Mitchell looking at his “many-hued dancers and thinking they needed to be clothed in something that matched their skin tone.”

Irish poet William Butler Yeats asked rhetorically, “O body swayed to music, O brightening glance/ How can we know the dancer from the dance?” In classical ballet, the dancer becomes the dance – but only when there’s one clean line, be it black, brown or pink, from head to toe.

Since the 1970s, DTH dancers have worn tights dyed and shoes painted to match their skin tone, whether the color of coffee with cream, dark mahogany or something in between.

A joining of forces

Having the company featured in two institutions on the Levine Center for the Arts campus is serendipity. “Neither of us knew the other had an eye on Dance Theatre of Harlem,” said Gabbard. “When we discovered it, we said, ‘Why don’t we do this together?’ ”

Then a third partner emerged. Jay Everette, community affairs manager for Wells Fargo, asked how Wells could help, as DTH’s visit was already funded. “Jay challenged us to dream a bigger dream,” Gabbard said. “He asked us, ‘If Wells came on board, what could that do?’ ”

The answer: It will allow some 1,200 low-income people who might otherwise never see this company to attend a Dance Theatre of Harlem performance.

Gabbard had feared the only people who’d attend were those with substantial means. “The Wells Fargo Foundation,” said Everette, “was particularly interested in the community outreach and engagement aspects of this collaboration … We also worked closely with Blumenthal and Gantt leadership to ensure Dance Theatre staff and dancers are able to visit schools and community centers to share their compelling story.”

The Gantt Center’s Taylor was likewise concerned about making the visual exhibition accessible. So there’s no additional charge to see the show, once you’ve paid for museum admission. CMS seventh-graders take a field trip to the Levine campus during the school year, so those who come after the opening will see the exhibition for free.

The company’s program in Charlotte will combine the classical and modern. “New Bach” is set to music by the Baroque composer; “Dancing on the Front Porch of Heaven: Odes to Love and Loss” was first performed in 1993; “When Love” is set to music by living composer Philip Glass. Johnson says some ballerinas will be on pointe, but some dancers will be in jazz shoes and others barefoot. DTH has always been interested in redefining the word “classical.”

The most powerful ballet the group will perform may be the final one on the program.

“Coming Together,” with choreography by Nacho Duato and music by Frederic Rzewski, includes what Johnson calls an “amazing text” written by Sam Melville, a prisoner at Attica in 1970.

It reads (in part): “I think the combination of age and a greater coming together is responsible for the speed of the passing time. It’s six months now, and I can tell you truthfully few periods in my life have passed so quickly. I am in excellent physical and emotional health … I read much, exercise, talk to guards and inmates, feeling for the inevitable direction of my life.”

Melville was killed in Attica in 1971.

Today, Arthur Mitchell serves as artistic director emeritus of the company he founded.

“He was a visionary and a taskmaster,” Johnson said of the man she’s worked with and for since the 1970s. “He entered what had been a white-only terrain and, against all odds, his company has lasted for 47 years.”

“Harlem” – both the place and the idea – is still in Dance Theatre of Harlem. But it has expanded well beyond its home base. As David Taylor says, “The soul is still there, but it’s also just great dance.”

This story was produced as part of the Charlotte Arts Journalism Alliance.