If you’re surprised Mamie Williams still works at 87, she said you might also be surprised to learn how much working helps her. 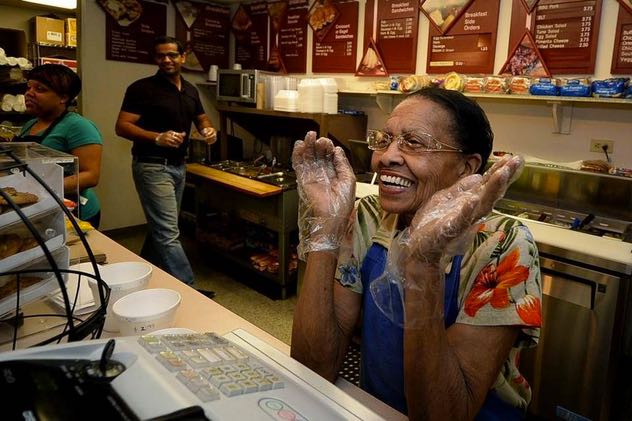 Mamie Williams, who is 87, can’t imagine not going to work weekdays at Midday at the Tower. It keeps her young, she says. Weekends, family members pamper her. Diedra Laird, The Charlotte Observer

Mamie Williams has a secret for staying spry at 87.

She wakes at 3 a.m. weekdays and reads a favorite Psalm. Then slowly, very slowly because of her arthritic right knee, she dresses and gets ready for the day. She doesn’t like to feel rushed. Around 5 a.m. or so, her boyfriend – a younger man no less, a mere 70 – drives her to Presbyterian Medical Tower.

You’ll find Williams in the third-floor coffee shop Monday through Friday. She is a tiny woman at barely 4 feet tall, her back stooped, her right knee wrapped in an Ace bandage. She moves tentatively between the microwave and counter, holding on for support as she whips together sausage biscuits, pimento cheese sandwiches, BLTs or whatever else customers fancy.

If you’re surprised Mamie Williams still works at 87, she said you might also be surprised to learn how much working helps her. “Exercising my hands making sandwiches, meeting people, keeping my mind sharp.”

It’s not for the money, she said. She could get by on Social Security. “I’m doing something I like to do.”

Born in Lancaster, S.C., Williams said her parents died when she was a child. Her maternal grandmother raised her and encouraged Williams to attend college after she graduated from Finley High School in Chester. Instead, Williams went to work. “I said, ‘Grandma, you raised me and I want to go to work and do something for you.’ ”

Willams has been working ever since.

She eventually moved to Charlotte and took a job in the cafeteria at S.H. Kress Co., a department store on Tryon Street. She raised her son and daughter here. Their father died in the 1980s. Though Williams and her boyfriend have been “courting” for years, she has no plans to remarry.

She also has no plans to retire. She worked at Kress 24 years and has been at Midday at the Tower for 39. “I tried to convince her to stop,” said her son, Pete Williams, 59. “I see that’s not going to happen.”

Maulik Shah, 36, who owns the cafe, said she is guaranteed a job. “They tell me any time I feel like sitting down, to sit down,” Williams said. “I told them, ‘No. If I have to do that, I shouldn’t be working.’ The Bible says we are going to have aches and pains. At my age, I could be having pains in my back. You just have to adjust.”

Imagine Jean Brawley’s surprise when she walked into the cafe and saw a tiny woman at the counter, a bit unsteady on her feet as she fielded sandwich orders. Then, the woman turned around and smiled.

Brawley was even more surprised.

“I looked in her face and it was like a flashback of 65 years,” said Brawley, who is 71. “The emotion just flew over me. As a child I used to go with my mother downtown to Kress’s five and dime. I remembered her. She was very distinctive looking and had an incredible smile that lit her face up.”

“What are you doing here?” Brawley asked.

This keeps me going. I just can’t stop.

Co-worker Shataya Lyons, 24, calls Williams an inspiration. “She’s been doing this since before I was a twinkle in my dad’s eye,” Lyons said. “There are people who are my age and don’t want to work, and she’s 87! She doesn’t miss a day.”

“Up in my younger days, I saw people who retired and they were nice and healthy, then within two months they were dead. …

“A lot of people think they know everything, especially when they get older. It doesn’t work like that. You never get too old to learn. …

“Everybody loves my sandwiches. I make them all with love. And on Friday I give them extra love.”

One vanity: She dyes her hair once a month. “As a teenager, I had a streak of gray and I looked like a skunk. I started to put tint on it. I don’t do it to make myself look younger. I just like black hair.”

Her diet: Whatever she wants, especially sweets and Budweiser on the weekends.

Retirement plans: “When the good master gets ready for me. As long as I can work, work, work, I’ll work.”

Her Golden Rule: “I love everybody. I don’t care who they are, old, young or what. I don’t have no specials for loving.”