Inspired by West African ballet, the Durham-based performing arts company Shabutaso is returning to Charlotte this weekend for three shows at Children’s Theatre of Charlotte. 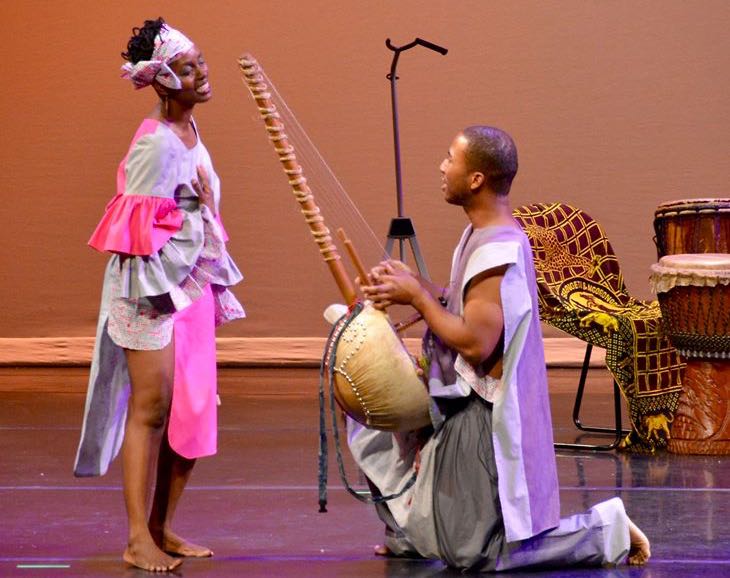 Munekera is a West African ballet that tells the story of a young woman and her love for a young man. Photo: Courtesy of Shabutaso

When we in the West think of ballet, we seldom associate that art form with West Africa. But in the African nation of Guinea, the national dance company Les Ballets Africains has been entertaining global audiences since the 1950s.

Inspired by those African artists, the Durham-based performing arts company Shabutaso is returning to Charlotte this weekend for three shows at Children’s Theatre of Charlotte.

The 14-person dance and drum company will be performing Munekera, a coming-of-age story of a young woman and her love for a young man.

Qcitymetro talked with Shabutaso Chairwoman Aya Shabu about the performance and what audiences here can expect. Here is an edited transcript.

Q. What is Shabutaso, for those of us who may be unfamiliar with the organization?

It translates to “house of Shabu.” We are a nonprofit organization. Our mission is to connect and reconnect to the culture and traditions of Africa. We’ve been in existence for over 25 years. We were formally known as the Magic of African Rhythm. We are a performing arts company, but we do so much more. We have a healing arts division. We have an African drum institute. We have a rights-of-passage program.

Q. This is not your group’s first visit to Children’s Theatre?

We’ve been here twice before, in 2009 and 2011. We came then to do a different work. We were invited by the theatre to do a couple of public performances and then a series of school shows. It was called Djembe Fire – high-energy Djembe dance and drums, a lot of call-and-response and singing with the audience.

Q. So what’s different about your performance this weekend?

Munekera is very different. It is a love story, set in the style of a West African ballet, which was popularized by president Sékou Touré of Guinea in the 1950s. And so we’re using traditional African rhythm, some original compositions of songs, melodic instruments, dance, all to tell the story of a young woman named Aya who falls in love with a young man and is in pursuit of that love.

Q. How would you describe it for those unfamiliar with this art form?

I would describe it as a West African ballet inspired by the work we see from Les Ballets Africains. We don’t have as many people. We have a cast of 14 people. Each dance is moving the story forward. There are a few spoken lines, but it’s not heavy on dialog. Just a line here or a line there, to help the audience anchor. It relies mostly on music and dance.

Q. Is this a production for children?

It’s a ballet for anyone. I think it is for children in that children are really in tuned. They don’t need a lot of vocabulary to understand things. As their vocabularies grow, they take a lot of cues from what they see and what they hear. In that way it is speaking to the sensibilities that children have. Those sensibilities as adults, we grow out of, especially here in the West. We tend to be a very orally fixated culture. For children, this story will grasp them, and they will be able to quickly and clearly understand the story line.

Q. What do you want adults to take away from it?

I really want adults to understand that West African drumming and dance, as energetic as it is, it’s much more multi-layered than just big movement and a lot of jumping and high energy. We do have highs and lows in terms of energy. We don’t just have percussion instruments; we also have some beautiful melodies that we weave in. And I want adults to also realize that Africa is no just the remote village, so we actually play between the city scenes and the village scenes.