Charlotte entrepreneur Kimberly Robinson, owner of The Sole Addiction, has made a business operating a mobile shoe store that she calls a "Shoetique." 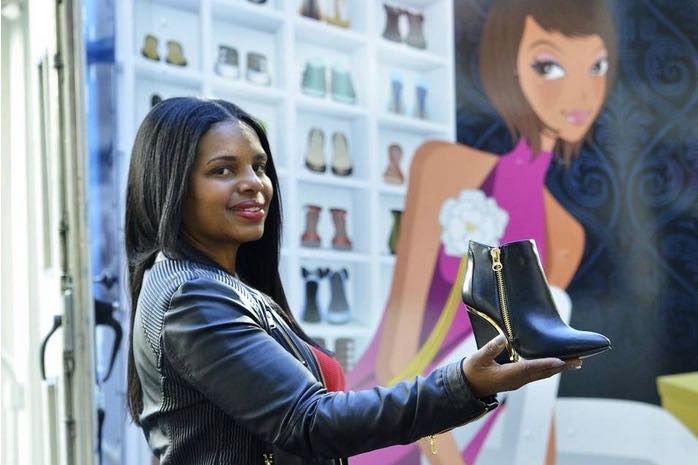 Kimberly Robinson, owner of The Sole Addiction, sells high-end shoes from her mobile truck next to the Aloft Hotel on College St. in uptown Charlotte. (Photo: John D. Simmons, The Charlotte Observer)

Sometimes a business idea is born when we least expect it. Take the case of Kimberly Robinson of Charlotte.

In 2009, Robinson had just been laid off from a banking job when a girlfriend invited her to tag along to the Magic Convention in Las Vegas, which is billed as “the world’s largest fashion marketplace” for retailers.

Without much else to do, Robinson agreed. Little did she know that the three-day trip would change her career path and launch her into the front lines of a growing retail trend – mobile fashion trucks.

Robinson, 40, is owner of The Sole Addiction, a small business that includes an Internet site and an 18-foot van (a shoetique, she calls it) that rolls around Charlotte selling women’s footwear. Although fashion trucks are said to be more common on the West Coast and in the New York area, here in Charlotte, just a handful exist, and the proprietors are overwhelmingly female.

“When women don’t have time to run to the mall, I can just show up,” said Robinson, a self-professed shoe addict. “I can be there to bring them their shoes. Or we can do something different; I can come to their homes and host a shoe party.”

It would be misleading to suggest that Robinson’s business idea was born completely in Vegas. It took year of trial and error before she landed on the idea of a mobile shoe store.

The Vegas trip, however, did get her started. Impressed by all the shoes she saw, Robinson bought two cases (12 pairs per case) and had them shipped to Charlotte for resale. She then set up a web site…and waited.

“At the time, I didn’t really know a lot about the whole website industry, so they weren’t really moving as fast,” she recalled.

Undeterred, she loaded some shoes into her car and traveled to hair salons and other places where women assemble. And as that approach worked better, she also began hosting private shoe parties.

“I was meeting people, and they were loving the shoes,” she said. “But it was too much work. Too many boxes I had to bring and take and haul in and out of people’s homes… It was a big toll on my body.”

Robinson said she got the idea for her shoe truck after seeing the growing number of food trucks in Charlotte. Between purchasing the truck and outfitting it to mimic some of the finer features of an upscale shoe store, she estimates she spent close to $90,000. (She also rents a warehouse to store her inventory, which some shoes costing upwards of $200.)

“It was a good penny,” she said. “I’m the kind of person who believes the first impression is the best impression, so I like for my stuff to look good.”

On a recent Saturday, Robinson’s blue truck was parked near the EpiCentre on College Street, where it was attracting a brisk walk-in crowd that included Fran Meehan, who had traveled to Charlotte to attend a Billy Joel concert with her daughter, Carry Meehan, who lives near Raleigh.

The women said they saw the brightly painted truck, along with some other fashion trucks that were invited there, and decided to pop in.

Added her mother: “I’m always game for shopping, especially when it comes right to us. There are just certain things in life that you can’t have enough of – shoes, beach bags and probably regular purses, too.”

But finding a good place to stop isn’t always so easy when your business rolls around town on four wheels. City regulations dictate when and where fashion trucks (and food trucks) can and cannot operate along city streets.

Robinson said she tends to favor private property, where she negotiates with landowners, some of whom charge a small percentage of her sales.

Robinson said she’d like to see the city create more spaces where fashion trucks can operate. And to help one another out, she said, she and other Charlotte-area fashion truck owners often share tips about pop-up markets and other places where they might set up.

Despite the challenges, Robinson has no plans to invest in brick and mortar, which would mean monthly rent payments and signing a multi-year lease.

“Overall, I don’t think that’s what I want. I love being able to come and go as I please,” she said. “If it’s slow, I can move it to another location. It’s all about convenience.”

What she is considering, she said, is at some point putting more trucks on the street or even selling franchises to her business.

Mainly, she added, she hopes her business will inspire other women who want to “do their own thing, be their own boss and have their own business.”

“Mainly, it’s been like a dream,” she said. “But sticking with it has not always been easy.”

Tawanda Black contributed to this article.