Franklin Deese: ‘From Inmate to Mayor’

At a graduation ceremony for the Gang Alternative Principles program in Charlotte, Marshville Mayor Franklin Deese talked about his journey from prison inmate to politician and business owner. 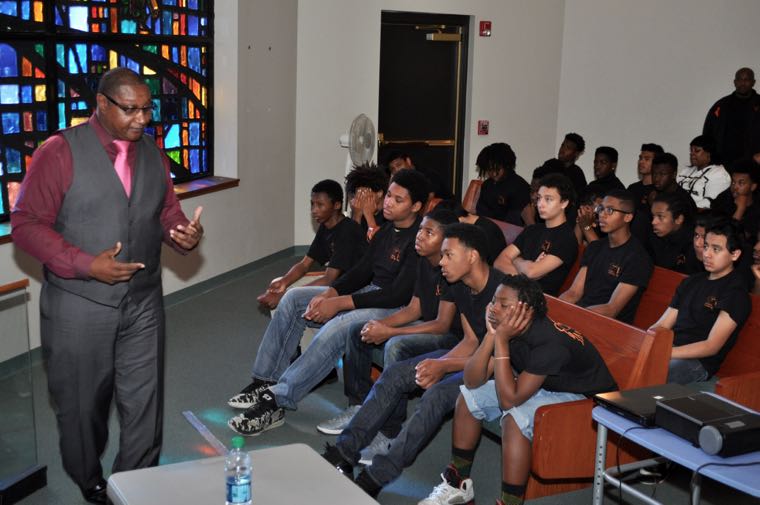 Marshville, NC, Mayor Franklin Deese, left, talks with teenage boys enrolled in the Gang Alternative Principles Program in Charlotte. He spoke of his journey from a prison inmate to being elected six times to public office. (Photo: Glenn H. Burkins for Qcitymetro.com)

When it comes to making poor choices (and living to recover from those mistakes), Marshville Mayor Franklin Deese may have been the perfect speaker for the Fall 2015 graduating class of the Gang Alternative Principles (GAP) program.

In 1980, at the age of 22, Deese was sent to Central Prison in Raleigh after an armed robbery conviction. And it wasn’t his first brush with the law. But on Dec. 5 at First Baptist Church-West in Charlotte, Deese told a group of teenage boys that early mistakes in life need not lead to a life of mistakes and permanent regret.

It all boils down to changing from within, he said.

“It don’t matter if you make a mistake,” said Deese, a Democrat currently serving his sixth term as the elected leader of Marshville, a small town on the eastern edge of Union County. “You can change all that, but you’ve got to change. Anytime you want to change your circumstances, start within, and your circumstances will change as a result.”

GAP was started in 2008 by what is now the Charlotte Community Services Association and has worked with nearly 700 youth. Funded by the Mecklenburg County Juvenile Crime Prevention Council, the program seeks to help teenage boys steer clear of gangs while learning to make good life choices. In 2011, the program won the national FBI Director’s Community Leadership Award.

At the recent graduation ceremony, 29 teens received certificates for completing the Fall session’s 12-week program. Five others had dropped out along the way. Nearly all were referred to the program by local courts.

Deese, who has written a book titled “From Inmate to Mayor,” shared the story of his life journey with the group – a journey that now sees him as owner of a tax-preparation business that spans two states and grosses more than $1 million a year, he said.

But things weren’t always so rosy for Deese, who described his younger self as a popular and academically bright high school student who started skipping school to fit in with the “cool kids, the ones hanging out.”

“I was just making bad choices,” he said “When I skipped class that first time, that was just a choice to skip class. I had no idea it would lead me to a 29-year bid for armed robbery.

“We don’t understand the significance of our choices sometimes,” he added. “We make these choices and say, “Oh, I’m just skipping class,” but it can lead to a lot more devastating things.”

Things like drinking, smoking weed, gambling, and breaking and entering, he said.

Deese said that when he finally landed in jail, he went behind bars with “the same arrogant little attitude” he had when he ran the streets with his friends.

He said his outlook on life began to change one day after he struck a prison guard and later found himself locked in a room with three angry guards with Billy clubs – “ including the biggest white boy I ever saw in my life” — looking to even the score.

“Suffice it to say, it didn’t go very well for me,” he said. “So I knew what was about to happen to me.”

Deese said his punishment also included being locked up for three weeks on death row with inmates awaiting execution.

Deese said that incident began a “process” that led to him becoming a better inmate, with an eye toward fixing his life.

Seven times Deese applied for parole, and seven times he was rejected, finally getting out early in 1989 with $30 and the clothes on is back.

“To be totally honest with you, I did not get out of prison thinking about being a mayor,” he said. “I had one thought when I got out of prison – I am not going back in there, whatever it takes.”

Back on the outside, Deese said, he focused his attention on caring for his aging mother and finding work. At first, he said, folks were reluctant to trust him. But that began to change, he said, after he demonstrated his commitment to living a new life and began joining political and community groups, including the NAACP.

Deese said his political victories are all the more amazing given Union County’s demographics, which are overwhelmingly white and Republican.

He first ran for a County Commission seat in 2004 and “got slaughtered.” But he learned from that experience, he said, and the next year ran for mayor of Marshville and won with 75 percent of the vote, an office he has held ever since.

In addition to his book and speaking engagements, Deese said he is in the midst of shooting a television pilot about his life, which he and producers hopes to shop around to television networks.

“Life is a beautiful thing,” he told the teens. “It is precious, precious – every day you draw breath. When you appreciate it, you will realize this is a gift that is way too valuable to waste.”