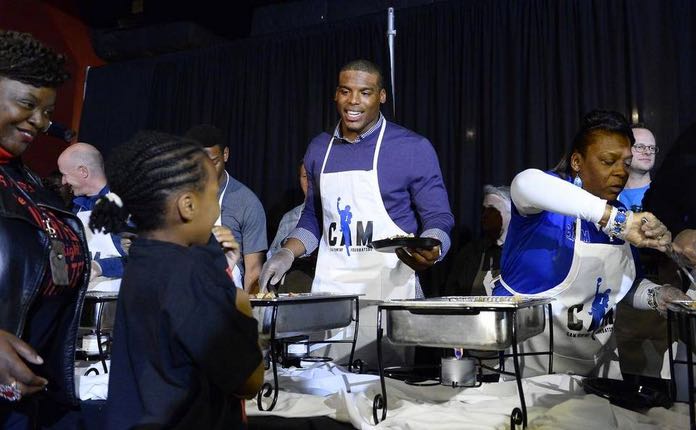 Cam Newton Foundation's "Cam's Thanksgiving Jam" The panthers quarterback along with members of his family and more than 50 volunteers served up a traditional Thanksgiving meal for 900 underprivileged kids held at The Fillmore. (Photo: Robert Lahser, The Charlotte Observer)

Carolina Panthers quarterback Cam Newton fed nearly 900 Charlotte children through his foundation on Monday night at the Fillmore, serving the kids while flanked by his brother and mother and after holding a dance contest.

“To see the kids, to see the parents, and to share a plate, a moment, a conversation with them is always beneficial for both parties,” Newton said at his third annual Thanksgiving Jam.

Newton’s foundation fed children and some parents from Second Harvest Food Bank of Metrolina’s Kids Café Program. It partners the food bank with other nonprofits that serve at-risk children.

Before serving the kids, Newton led a dab competition. The dab is a dance move that originated in Newton’s native Atlanta, and it was part of the celebratory dance that Newton did after scoring a touchdown Nov. 15 that led to a big national discussion.

Newton invited three girls on stage to do the dab while hundreds of others in the crowd did it as well.

“I had a coach always challenge me to use my influence in a positive way,” Newton said. “And anything that I’m doing is not necessarily derogatory in that specific case, whether it’s a celebration or something to be happy about.

“When I see kids doing a dance, whether it’s the Dab, the Nae Nae, the Twist, the Harlem Shake, the list goes on … that type of energy can’t be matched. And that’s what people don’t understand that critique the negativity about it. It puts a smile on my face, and you can’t ask for much more.”