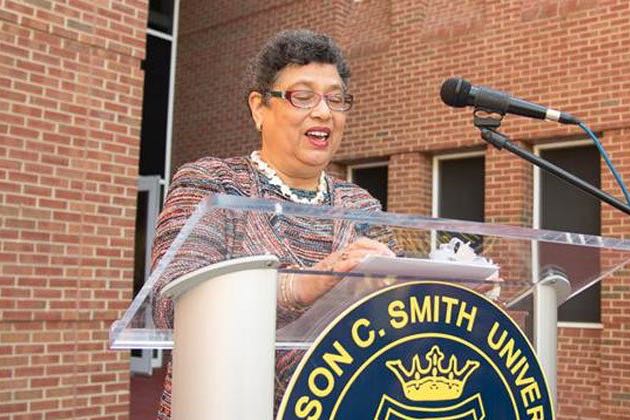 Former Johnson C. Smith University President Dorothy Yancy has taken exception to comments made in the Charlotte Observer by former JCSU trustee Jim Woodward, who talked with the paper about the school’s current finances.

In a Facebook post on Sunday, Yancy, who led JCSU from March 1994 to June 2008, said an Observer statement attributed to Woodward “implied the institution’s current financial state was inherited by (current JCSU President Ronald Carter) seven years ago.

“This is simply not true,” she said.

Carter, who succeeded Yancy in 2008, is facing criticism from a former JCSU trustee who has questioned Carter’s leadership, including Carter’s financial stewardship at the private, historically black college. That former trustee, Talmadge Fair, a 1961 JCSU graduate and president of the Urban League of Greater Miami, has launched a petition drive seeking to have Carter removed from office. (Talmadge said he was voted off the board earlier this year after he repeatedly raised concerns but received no answers.)

The Observer article stated that Woodward, former chancellor of UNC Charlotte, “praised Carter for steering the university through financial hardships over the past seven years.”

It was that characterization, apparently, that led Yancy to speak out. In a letter to Observer Publisher Ann Caulkins, Yancy requested a correction.

“To suggest that Dr. Carter has faced financial hardships since his appointment as President is not simply misleading, it is patently false,” Yancy said her letter to Caulkins. “Perhaps Dr. Woodward was unaware of the solid financial footing I left the institution in given that his brief tenure on the Board began after my retirement.”

In addition, JCSU in March was listed among more than 500 colleges and universities the U.S. Department of Education is concerned about and has placed under increased financial oversight.

Yancy, JCSU’s president emeritus whose name is on the school’s new science building, , said a Grant Thornton audit showed that she left JCSU with $14,776,727 in cash, which included $9,409,113 in unrestricted cash.

“Simply put, Dr. Carter inherited a successful institution that required $2.2 million per month to operate, but had a surplus operating budget with more than $9.4 million dollars in unrestricted cash to spend in any way he, with Board approval, saw fit,” she said.

Carter has declined media requests to discuss the school’s finances or the criticism of his leadership, but Monroe Miller, current chairman of the JCSU board of trustees, issued a written statement to the Observer expressing strong support for the direction the school has taken.

“Our work is paying dividends as we attract the attention and funding of major foundations and corporations. We will continue our forward trajectory as a student-centered new urban institution dedicated to applied research, intellectual rigor in our undergraduate, graduate and professional programs, as well as strong partnerships and engagement with the Charlotte community.”

In a written statement, Observer Editor Rick Thames said, “I see nothing in the story that suggests the university was not on sound financial footing at the time President Yancy left. In fact, the story points out that JCSU had a $29 million surplus as recently as 2012.”

Yancy’s letter, which she also posted to her Facebook page, is printed verbatim below:

Dear Ann,
I hope all is well with you. It has been quite sometime since we spoke last. Since my retirement from JCSU on June 30, 2008 I have continued my work in higher education and ultimately returned to my adopted home of Atlanta, GA. I find myself writing to you today in response to the digital article about JCSU written by Ms. Elizabeth Leland and published on Saturday, November 20, 2015.

A link to the article is below:
http://www.charlotteobserver.com/…/edu…/article45643509.html

To be honest, I was quite disappointed by the comment attributed to former JCSU Board Member and former Chancellor of UNC Charlotte, Dr. Jim Woodward, concerning the “steering the university through financial hardships over the past seven years.” To suggest that Dr. Carter has faced financial hardships since his appointment as President is not simply misleading, it is patently false. Perhaps Dr. Woodward was unaware of the solid financial footing I left the institution in given that his brief tenure on the Board began after my retirement. As I recall, the mission of the Charlotte News & Observer is to report clearly, truthfully, completely. Dr. Woodward’s statement concerning the financial state of JCSU at the time of Dr. Carter’s hire, was presented in the article as accurate and without challenge which is in fact not truthful or complete.

I was elected Interim President of JCSU on January 14, 1994 and served as President from March 1, 1994 to June 30, 2008. My tenure at JCSU was well documented by the Charlotte News & Observer and countless other credible publications. My successes and challenges are not in dispute, nor do I feel the need to defend my legacy which is substantive. What is pertinent to this discussion is the financial state of JCSU at the time of my departure. The audit of my last year in office was completed by Grant Thornton in February 2009, and provides the financial status of the institution as of June 30, 2008. I have attached a copy for your reference. Additionally, this information is publicly available via an open records request to the US Department of Education and for a fee you can review the 990 on Guidestar. On page 18 of the audit it is clear as of my final day at the institution there was $14,776,727 in cash of which $9,409,113 was unrestricted cash. Simply put, Dr. Carter inherited a successful institution that required $2.2 million per month to operate, but had a surplus operating budget with more than $9.4 million dollars in unrestricted cash to spend in any way he, with Board approval, saw fit. Additionally, at the time of my retirement we had successfully recruited a Fall 2008 class of 1583 students. Due to the solid footing of the institution, in 2007, one year prior to my retirement, the Board unanimously approved a resolution which required a super majority of the Board (75%) to approve any expenditure of the unrestricted cash. At the time there was a concern that having such substantial amounts of unrestricted cash might allow the President to spend unnecessarily, so additional governance was added to ensure the Board’s full support of expenditures. The resolution is on file with the Board Secretary, Tami Simmons. If the institution is unable to locate the resolution, I do have it in my records. Lastly, due to the positive financial state of JCSU, on December 31, 2007, six months prior to my retirement, I cancelled a $1 million line of credit with then Wachovia Bank because we simply did not need it to operate. In summary, I do not know when JCSU’s financial condition changed, however I do know that at the end of my tenure the state of the financial institution was exceptional.

While Dr. Woodward is not knowledgeable of the solid financial footing at the time of my retirement there are current Board members who are informed. The current Chair, Mr. Monroe Miller was Vice Chair of the Board during my tenure and Mr. John B. Stedman Jr. was Vice-Chair of the Finance Committee during my tenure. Both currently reside in the Charlotte metropolitan area.

I am a proud graduate of Johnson C. Smith University. I have been an active alumnus since my graduation 51 years ago. I spent several years on the Board of Trustees. I served as President for 14.5 years. I wish nothing but continued success for JCSU, an institution that I have supported my entire professional life – an institution that provided me with the foundation for my professional success. I cannot speak to the successes or challenges of the current leadership, but I cannot allow my record to be reported inaccurately. Given the information provided above, I respectfully request a correction to the aforementioned article.