13 reasons Cam Newton’s dance should be celebrated, not criticized 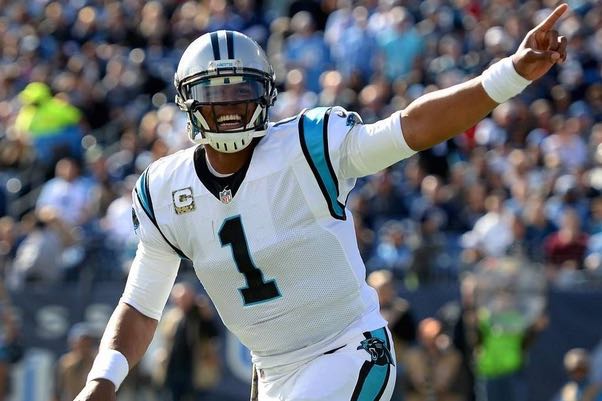 See Cam Newton and the Carolina Panthers take on the Buffalo Bills this Sunday at Bank of America Stadium.

That’s a synopsis of the reaction among many NFL fans – and several members of the Tennessee Titans – who took exception to Newton’s dance moves following his rushing touchdown late in Carolina’s 27-10 win Sunday.

Give me a break. Here are 13 reasons Cam’s dance should be celebrated, not denigrated.

1. People, it was a dance! Did you see what Newton did when one Tennessee player tried to get in his face about it? Cam backed off and then he danced some more! This wasn’t a throat-slash. This wasn’t a series of gang signs. This was more like Michael Jackson in the “Beat It” video.

2. Newton’s dancing – or his more frequent “Superman” pose after a touchdown – invariably goes hand in hand with what he calls the “Sunday giveaway.” That’s when the quarterback places the football he scored with into the hands of a little kid in the stands right after his celebration.

3. In Carolina’s Nov. 8 win over Green Bay, one of those kids was a 6-year-old boy from Virginia whose father had recently died at age 32 from a heart condition. His late father had promised to take him to a Panthers game, and so that promise was fulfilled by Colin Toler’s two grandfathers. Cam didn’t know that when he gave the ball away. It’s just the way it worked out.

Newton wants to be loved, sure. He wants the spotlight. But he also is generous in sharing that spotlight and that love, especially with children.

Little-known fact about Cam Newton’s football giveaways: The original idea for them came from Panthers offensive coordinator Mike Shula. Newton happily gives Shula credit for this, but Shula doesn’t like to talk about it.

4. Dancing is by nature a joyous act. Life doesn’t have enough joy in it. Newton plays football like he’s a big kid – the way we all think we would play it given the chance. “I try to make my game kid-like so people will see that I’m enjoying what I do,” Newton said Sunday. When you see him running full speed past a linebacker with bad intentions and still smiling, there’s no doubt of that. I have never seen a player smile more while a game is in progress.

5. Yes, Cam is one of a kind in a lot of ways. He’s not Tom Brady (who likes to curse a blue streak on the sideline after New England scores). He’s not Aaron Rodgers (who loves to do the discount double check, which was originally supposed to mimic putting on a “championship belt” until it became a commercial). None of these guys in the NFL are complete choirboys, you know. So neither Rodgers nor Brady dance like Cam? So what?

6. Neither Newton’s dancing, nor his exaggerated first-down signals, nor his “Superman” clowning, ever draw a penalty. He never hurts his team with these celebrations. He only hurts the opposing team’s feelings. (OK, OK, occasionally their fans’ banners don’t fare too well, either).

7. The Panthers are 9-0, which is absolutely shocking. Newton’s touchdown clinched the game. This wasn’t former Panthers running back Fred Lane (God rest his soul), who once faced off with some New York Jets fans in 1998 and grabbed his crotch after he scored a meaningless touchdown in a road game Carolina would lose by 27 points. The Panthers suspended Lane for one game for that crotch grab, saying they were in the “image business.” And that was before Rae Carruth and Greg Hardy. Newton’s dance was much tamer – and made far more sense – given the impact of the play.

8. Have you watched the NFL lately? Do you understand the violence involved? Did you see Ted Ginn Jr. get his head almost knocked sideways on the sideline Sunday?

It is a brutal game. If someone wants to dance after doing something well in a game so hard, what’s the harm?

Cam Newton already has more rushing TDs this year (six) than he did in all of his injury-plagued 2014 (five). However he probably won’t reach his career high of 14 rushing TDs, set in his rookie year of 2011.

9. Cam thoroughly understands the backlash he has already gotten — and will now get even more of — with all his gesturing and his “dabbin’,” which was the name of Sunday’s dance. His “Superman” gesture has been repeatedly mocked by defensive linemen after sacks. Now defenders will undoubtedly do some dabbin’ on top of Cam’s prone body the next chance they get.

You know what? He doesn’t care. So why should we? As he said Sunday: “I heard somebody say we’re not going to allow you to do that. But I’m a firm believer if you don’t like me to do it then don’t let me in (the end zone).”

10. It’s not taunting. You know what taunting is? It is Terrell Owens running to the star at the 50-yard line of the Dallas Cowboys so he can strike a pose. Newton always finds a place in the end zone away from the defense to celebrate. What he does is not “overly outlandish,” as coach Ron Rivera pointed out Monday. It’s a grown man enjoying himself and having fun, and one who is prepared to pay the consequences when the fun ends.

11. To me, what Cam does is a lot like what LeBron James does – think of LeBron’s pregame chalk toss and the exaggerated celebrations he performs after making big shots. I think Cam tries to model himself after LeBron in a lot of ways – from the championships to giving fans their money’s worth to Cam’s growing awareness of issues outside of football – and it’s hard to find a much better role model than LeBron.

12. Hey, Cam is ours. When was the last time Charlotte has had its very own superstar, with his very own style, leading his very own undefeated team? I totally understand why fans from New Orleans or Green Bay or Seattle don’t like Cam. It has a little to do with the dancing, and a whole lot to do with the fact that he’s one of the best players in the world.

13. Put it this way: Do you think if Jimmy Clausen had danced in the end zone in 2010, anyone would have cared?